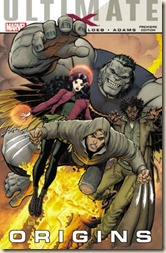 Wolverine is dead. The X-Men are no more. Captain America is a fugitive. The Fantastic Four disbanded. Lives have been destroyed and nothing can ever be the same-is there any hope left? It all begins with a search for a brand new character whose identity will leave jaws on the floor and change the Ultimate Universe forever.

This is the first post-Ultimatum X-Men title. It was apparently meant to be a new series in itself, but due to less-than-stellar sales, it became an introduction/prequel to Ultimate Comics X-Men. I actually really enjoyed this. Given that this series is set in a new, seriously anti-Mutant world, with a radical new premise for the X-Gene, it ran the risk of being too jarring and disappointing. Thankfully, however, it turned out to be an engaging, addictive and beautifully rendered graphic novel.

This series, set in the wake of the massive (though apparently over-long) Marvel Ultimatum mega-Event, offers up a true renewal of the Marvel/X-Men story. Rather than a re-boot (which it still sort-of is), the story picks up after the violent and shocking events of Ultimatum and the supposed end of the Ultimate universe. Mutants are now illegal, and the US government has issues an apprehend/execution order on all carriers of the X-Gene. There are a lot of changes to this Marvel universe, some of which are pretty inspired, and Loeb has done a great job of making this book an accessible introduction as well as a great read.

A lot of characters from the “main” lines of X-Men comics are dead, killed off in the wake of Magneto’s rampage. It is a little like a mutant dystopia, far worse than Zero Tolerance ever was. Magneto, of course, based his agenda on the belief that the X-Gene was the next step in the evolution of mankind, but in this iteration of the Marvel universe, it is revealed that mutants are actually a government experiment run rampant and out of their control. As one section of narration puts it:

“In an effort to duplicate the Super-Soldier program – whose sole gift was Captain America – we manipulated mankind’s genetic code. That’s how mutants came to be... Mutants weren’t born. They were built in a lab by some very smart men... Creating a legacy that rivaled the boys who came up with the Atomic Bomb.”

I really like this idea. Not more than the ‘main’ explanation for mutants, but I like that this offers a significant, radical change to the X-Men mythos, and has potential to generate significantly different storylines. (As a result, I am very interested in reading the Ultimate Comics: X-Men series. So keep an eye out for reviews of those in the not-to-distant future.)

Each chapter in this book introduces to another character that will (supposedly) feature prominently in stories to come. 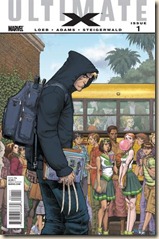 The first chapter of this book is a very good introduction to Wolverine’s son, Jimmy. He’s been brought up by a human couple, and the chapter’s narrated by his adoptive father. At the beginning, he also had no idea he was a mutant. He is in a car crash, however, and comes out bloody and torn, only to heal in front of his soon-to-be-ex-friends. Kitty Pryde comes along, and gives him a box of stuff left for him by Wolverine. Jimmy learns the truth, and discovers his other powers – one was interesting, regarding his claws (they’re bone at first, but then he appears to think about turning them metal, and then metal seems to grow over them... a la Colossus, perhaps?). 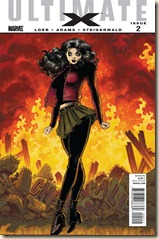 The second chapter focuses on “Karen”, who is actually Jean Gray – one of the survivors of Ultimatum. She’s hiding in Baltimore, attempting to come to terms with the grief of losing everyone she holds dear. While at work, Sabretooth and Mystique come looking to recruit her for their new Brotherhood. It doesn’t go well, and Karen must once again disappear. She decides to recruit her own, new, righteous band of mutants who will continue the work of Professor Xavier and the X-Men. 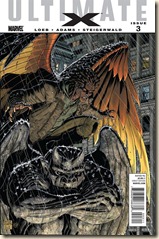 In the third chapter, we’re introduced to the first mostly-new character: Devon, the Chicago Angel. True, he’s a little like Archangel, but he’s also got so much more potential. Demographically, he’s also the polar opposite of Warren Worthington – rather than a rich, white trust-fund baby, Devon’s African-American, and the unemployed brother to a Chicago cop. The chapter is narrated by his brother, who is unaware of Devon’s mutant abilities (he can hide his wings). The brothers clash, because he thinks Devon’s a waste of space and just mooching of him – in reality, Devon is playing the part of vigilante at night, helping to keep the streets free of crime. It’s a nice, touching story of a lost kid, mutant, who finds a new family when his own can’t find a place in their hearts to keep and help protect him – he is Jean’s second recruit for her new team. 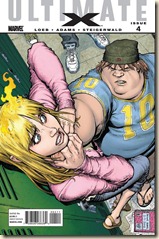 Liz and Teddy, introduced in the fourth chapter are an interesting pair of half-siblings. She is, for want of an actual name, Flame Girl, and he is the Blob Junior – their father is the original Blob, ally of Magneto and conflicted badguy. Their abilities are revealed in the midst of a school shooting, when all goes to hell and we learn of the depth of anger and hatred that the human population feels towards mutants. The new mutant team comes to the rescue, but so too does a member of the new Brotherhood. A dysfunctional family will be torn apart, but two artificial families will be bolstered. 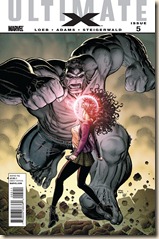 The final chapter of the book sees the team coalesce with the addition of one final member, who joins in the role of protector and enforcer (the big, grey, Hulking fella on the cover), and we also learn who’s been feeding Jean/Karen her information, and helping out behind the scenes. It’s quite the reveal, and promises some interesting things in the future. There is also a big reveal with regards to the new Brotherhood and their agenda, and the two groups have a tense squaring off.

Overall, I really liked this book – a lot more than I admit I was expecting. I especially like the way Loeb has written both the new and returning characters, and composed a credible premise and story for the surviving mutants. The new characters are very good versions of the mutants we know and love from the main X-Men universe and series. The returning characters are very nicely done, too, with added background and nuance as a result of the horrors of Ultimatum.

As mentioned at the start, this is a wonderfully rendered series, and I really liked Adams’s artwork. It’s sharp, clear, and quite beautiful, if just a tad cartoony at certain points. The panels and full-page spreads really leap off the page. It’s extremely eye-catching and vivid. 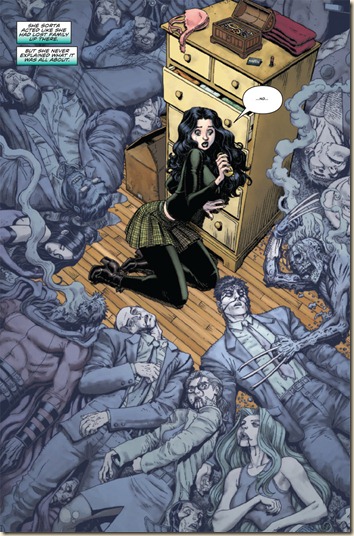 Despite having never read any of the Ultimate or Ultimatum series, tie-ins or books, I didn’t feel especially lost while reading this book. The references to previous events certainly made me wish I knew and the back-story, but it didn’t make me like the book any less. I could easily follow events, and the exposition is very well done (each chapter is narrated by someone else, filling in the background where necessary). Therefore, I don’t think it matters if you haven’t read any of the previous issues or collections.

That being said, given Marvel’s frequent re-boots (yeah, yeah, they’re “not re-boots”… but really they are…), it’s also possible to find a ton of the old story paperbacks and hardcovers in bargain bookstores – they’re usually new and near-mint condition, too, just with remainder marks. More importantly, they’re usually pretty cheap, so it shouldn’t be difficult or expensive to catch up if there were any back-stories you wanted to brush up on. If you want better-quality versions, it looks like Marvel’s releasing more full-series omnibus hardcovers, so given time I’m sure there’ll be massive Ultimate and Ultimatum hardcovers available.

Back to this book… I would definitely recommend it to anyone interested in the new era of Ultimate Comics and X-Men in general. I really enjoyed this book, and I think it works on ever level you could want from a comic – in terms of story and artwork, this is top-notch.