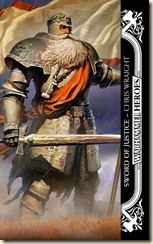 The First in a new Black Library series, focussing on the Emperor’s Champion

Fresh from the slaughter of the Emperor’s enemies in the north, Ludwig Schwarzhelm, Emperor’s Champion, is sent to Averland to oversee the inauguration of a new elector count.

Beset by orcs, and hampered on all sides by the ambitions of rival magnates, he is soon fighting to keep the fractious province together. But the rot runs deep. Powerful forces in Altdorf seem determined to see him fail, and suspicion falls on even his most trusted allies.

When all is at its bleakest, the mark of Chaos and the full horror of his task is finally revealed. Alone, doubted by those closest to him, this will be Schwarzhelm’s greatest ever challenge, one on which the destiny of the Empire itself depends.

This is the first in the Black Library’s Warhammer Heroes series, which aims to shine a spotlight on key figures in the Warhammer world. The blurb from the back of the book describes the aim of the series best:

These are lands divided by bitter strife and deadly conflict, where nations and races wage countless wars upon each other. In such a world, the balance of power depends upon the acts of individuals – upon the deeds of Heroes.

I must admit that I came to this novel expecting something a little different: I had hoped it would be Schwarzhelm’s story; how he came to be Emperor’s Champion, his rise through the ranks, and so forth. Instead, it seems to be a story about Schwarzhelm. Not at all a problem, as the novel quickly became entertaining, and I forgot my initial, slight disappointment.

The novel opens with a decent battle, if very detailed, and perhaps a tad over-long. At first, it was not entirely apparent to me why it was there, other than to start the novel with an account of grim battle. It does the trick of starting our introductions to three key characters for the rest of the novel: Schwarzhelm himself in a small way; Verstohlen, Schawarzhelm’s personal aide and agent; and Markus Bloch, the new recruit and addition to ‘the family’, the Champion’s retinue. I know what the author was trying to do with this battle, but I think the scenes that followed were much better at conveying the personalities of Schwarzhelm, Bloch and Verstohlen (the last of whom I warmed to almost immediately: enigmatic, mysterious, driven and devious, he came across as a more complex character, with more potential and to offer the reader in the future).

After Schwarzhelm returns to Altdorf, we get a nice description of the Imperial Palace: an "architectural mess" where "ceaseless scheming" takes place. The pomp and ceremony of the victory march (complete with a couple of wry jabs at bureaucracy) is another example of Wraights over-describing. What follows is more important and revealing of Schwarzhelm’s character than the opening battle (which didn’t actually feature Schwarzhelm that much), as the Emperor orders a war-master to get involved in the mud of “high politics”: the election of an Elector Count, specifically in Averland. He’s really not very happy about it, and Wraight does a brilliant job of showing us his frustration and anger at the whole enterprise.

Sword of Justice effectively becomes two novels after Schwarzhelm takes his retinue to Averland: the first focussing on the election, the second focussing on the army’s battles with a horde of rampaging Orcs. The first is certainly closer to my own tastes in fantasy fiction (I’m particularly fond of politics, conspiracy and intrigue), and as a result I found Verstohlen’s investigations in the city engaging and gripping. The other focus, with Bloch as the central character (joined later by Schwarzhelm), was also very good, if just a bit repetitive – unfortunately, I’ve never been able to get excited about repeated set-piece battle scenes. I think the only author who’s managed to balance story with battles well enough to keep me hooked throughout an entire novel (well, an entire, long series to be honest) is Bernard Cornwell. In all fairness, however, Wraight manages to balance the amount of time spent at each location well, so you’re never left wondering for pages when Bloch will stop swinging his halberd or chopping down an orc… Also, when Schwarzhelm joins the fight, there’s a little more inter-battle scenes, as they discuss the events in Averheim and the spiralling violence surrounding the election.

Schwarzhelm’s relationship and competition with Reiksguard Marshal, Kurt Helborg, is an interesting facet to the storyline, and portends good things for the future of the series. The two champions have completely different styles, characters and approaches to life and war, and the result is a strained respect tinged with a healthy amount of animosity – though Schwarzhelm does seem to be the more jealous and suspicious of the two. One of the central questions of Sword of Justice seems to be whether Schwarzhelm is still capable of being the Emperor’s Champion, or if he is too elderly, past victories propping up his reputation and hiding the fact that he might not be capable of such feats again. His short contribution to the campaign against the greenskins seems to suggest otherwise, as does the final set-battle in Averheim.

Speaking of the climax in Averheim; I found it a little muddled. It was fast-paced, mimicking the ferocity and speed of the conflict, but it seemed to be slightly jumbled. Some of it wasn’t clear, explained too late, and in some ways not sufficiently explained.

Overall, this novel exceeded my expectations and was enjoyable, if inconsistent. If I had one criticism, it would be that Wraight sometimes gives in to a little too much detail and description, which slows the pace of the novel – which, on the whole, is very good and engrossing. If he could find the correct balance of description and pacing, then his novels would easily become some of the best published by Black Library.

Sword of Justice’s mix of intrigue, conspiracy, and frequent gritty battle scenes offers something for all fans of fantasy fiction, and should certainly appeal to fans of other Warhammer fiction. It might also convert some new readers to other novels in the same setting. A solid start to the Warhammer Heroes series. Recommended.