An Interview with PAUL TOBIN 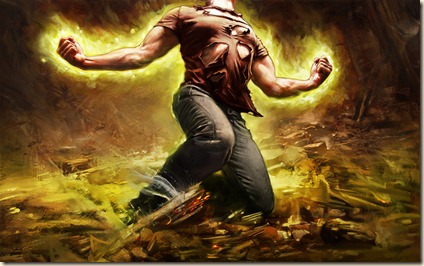 Prepare To Die!, the debut novel from Paul Tobin has been on my radar for a little while, now – pretty much since Night Shade announced it. However, because I’m writing a super-hero-related novel myself, I’ve been hesitant to read it in case I get unduly influenced, or depressed about the competition… [In case you’re wondering, yes, my dilemma over Prepare… is one of the two books that sparked the “Should You Read What You Write” post.]

However, after Paul’s description of the novel (below), I find myself ever-more eager to read it. I think I’m going just to throw caution to the wind and get to it in the next couple of weeks. So, read on to find out about Paul’s writing, superhero Grosse Point Blank, and more!

I thought I’d start off this interview with something easy: Who is Paul Tobin?

A bald writer with a moustache. A guy who wants character to be the central part of all his fiction. A comic book writer with probably around 300 comics to his name. A novelist who just released his first book, but there are already three more finished, because I've been working on a handful for a number of years as a hobby, but have now grown serious about it. I live in Portland, Oregon, with my wife (artist Colleen Coover) and one plant: an African Violet that occasionally flowers and makes me feel special.

Your debut novel, Prepare to Die! is out now through Night Shade Books. How would you introduce the novel to a new reader? Where do you see the series going in the future?

The genesis/central plot of the novel is that moment when a superhero’s arch-nemesis seems to have an upper hand, and does a cackling pronouncement of “Prepare to die!” And then there’s always the dramatic turn-around and the hero wins and blah, blah, blah. My thought was, What if the hero accepted this? What if he said, “Yes. I would like to prepare to die.” Where would it go from there? In my novel, Steve Clarke, Reaver, is given two weeks to prepare to die. He travels back home to a town he hasn’t seen since he gained his powers, and the love of his life that he left behind. It’s sort of Grosse Point Blank for the superhero/fantasy genre.

As far as where I see the series going in the future, I’m not really considering it as a series. There is another book I’d like to do that takes place in the same world, called Your Merest Touch Can Destroy Me, but I need to finish a different book before I can start on it. 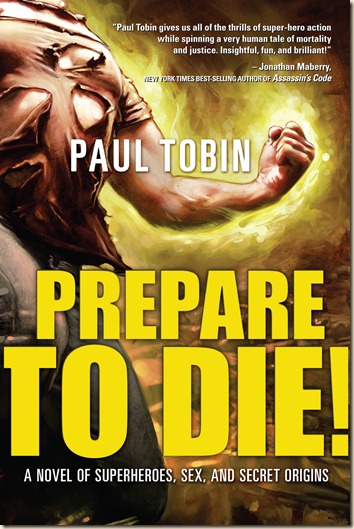 The inspiration is definitely from cheesy old comics… those overly-dramatic moments, especially the Jack Kirby/Stan Lee comics from the 1960’s. As far as my inspiration in general…? It’s from everywhere. Noir movies. 80 years of comics’ history. A wealth of novels, television shows, and even just listening to people talk in cafes. I’m a little leery of people with narrow lists of influences. It’s particularly telling in the comic book field, where many writers have nothing but other comic book writers as influences, so everything because watered down versions of the original, rather than fresh takes or new voices.

The novel features a superhero – do you have a history of reading comics? Which are your favourites and why? 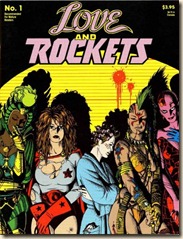 I’ve read comics all my life, and written hundreds of them for all the major companies, all the major characters. I grew up reading American comics, and still love ’em to death, but too much of the field is dominated by the superhero genre, and I think the medium would be best served by expanding other types of writing. Love & Rockets has always been a favorite of mine. And the works of Hugo Pratt, Jordi Bernet, Dupuy & Berberian, Herge on Tintin, all of the “duck” books by Carl Barks, Hub’s work on Okko, anything by Seth, Dan Clowes, Chris Ware. There’s lots more. 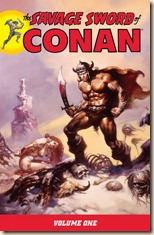 I honestly can’t remember. I’ve been reading it all my life, and I’ve a horrible memory. I was picking up the early Savage Sword of Conan magazines from Marvel when I was young, but I was reading far earlier than that. I went to a very small grade school in Floyd Iowa (my entire class was 21 people) and always in the library there, reading about Nancy Drew or the Hardy Boys or the adventures of the Greek Gods. If someone had a mystery, I wanted to know how they solved it, and if someone had a sword in their hands, I wanted to read about what they were doing with it.

It’s fantastic to be a writer, but sometimes rather draining to be a professional writer, with all that comes with it. I did a recent blog post where I really totaled up all the “business” aspects of being a professional writer, and found that if I went by a strict 40 hours-a-week schedule, eight months out of my year are eaten up by tasks that aren’t actual writing. Disheartening. Of course, any professional writer can tell you that a 40 hour work week is for amateurs. Many of us try to find methods of working 40 hours in one day. Not possible, of course... but we TRY.

As far as my working methods, and strictly speaking of prose, here, I have a minimum word total for each day, and a maximum for each day. I find that if I don’t have a maximum (it’s a measly 1,500 words), then I tend to write so much that I lose momentum, deciding that, hell… since I wrote 5,000 words yesterday, I can take a day off. And that’s a killer. Equally bad, without a word maximum, I’ll write until I finish off a good part, meaning that each new day starts from a dead spot, which is tough.

So, each day, I proof what I’ve read on the previous two days, and then add between 1,000 and 1,500 words. It's a slow and steady march that gets the job done, and also gives the work a time to develop. I’ve friends who brag about doing 15,000 words in a day, and I read their writings and go, “Yeah. It shows.” 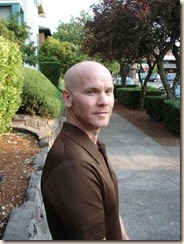 I don’t really remember a time when I didn’t want to be a writer, though I remember times when I didn’t understand that it actually was possible. My first real foray into writing was submitting to Dragon Magazine, talking about cool magical items I’d developed for the “Jester” class in D&D roleplaying. I can still remember receiving my article back in the mail, with a big “contract enclosed” scrawl across it.

I think it’s a really exciting time for genre fiction of all types. The digital age is allowing both authors and readers a freedom that we could have never dreamed of in the past. It’s easier to get the works out there, and it’s easier for readers to find exactly what they want to read. As far as where my work fits, that’s always the question. Really, as long as I’m happy with my writing, I can’t worry too much about the other side. I imagine I appeal to those who want strong character depth, a human feel to characters, people who live in fictional worlds but you still feel like you could meet them on the streets of your own town.

Oh hell… I’m working on lots of things at the moment. The next novel is titled Agatha, and is the story of a woman’s life (and un-life) from the period of 1880 up until today, with a stress of the decadence of Germany’s Weimar years, and a grand tournament called the Tumult. The book is rather a cross between Jonathan Strange & Mr. Norrell combined with… maybe Dragonball?

Beyond that, I’m finishing up a book titled Red Zipper Sidekick, which is about two young men and their ongoing relationship, as one of them decides to become the fastest gunslinger in all creation, up to an including the gods.

And I’m trying to get a huge chunk of a middle age series done before I start releasing them. A series called The Marvelous Adventures of Kirby Steinberg, which is loosely based on the Banana Sunday comic book series my wife and I did. I’m on the fourth book of the series. I should probably start releasing them, eh?

And then, I’m working on Miss Piplin’s School For Ghosts, which will be a follow-up to Agatha.

That all sounds like a lot, but again… some of this has been in progress for years, as I was writing prose for a hobby while working in comics. I’m still working in comics as well. I have two secret graphic novels projects, an upcoming supernatural horror piece called Colder, and I’m working on Bionic Woman, and my wife and I just started up a charming little online comics entitled Bandette. 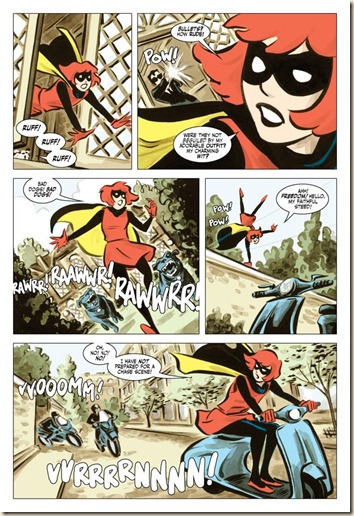 A page from Bandette

At the moment I’m on a Doyle kick, reading lots of Sherlock Holmes stories and also the Professor Challenger works. There’s some P. G. Wodehouse next to my bed, as well as Dashiell Hammett and Raymond Chandler. All mainstays. Just finished The Night Circus. Let’s see, also just finished Osiris by E.J. Swift, and Scourge of the Betrayer by Jeff Salyards. Also reading piles of reference books on Regency-period London for my Miss Piplin project.

Hmm. The range of my favorite places to write? It’s cafes and city parks and strip clubs. A writer I really respect once told me to write in strip clubs, because it feels weird, and you shouldn’t feel normal when you’re writing fiction… you should feel like you’re in another world. It’s actually worked for me.

Just the continuation of my writing. I’m incredibly eager to get my Agatha book underway. When I wrote Prepare To Die!, I thought it was the best thing I’d ever written. Now I think it’s Agatha.