“The Walking Dead: Rise of the Governor” by Robert Kirkman & Jay Bonansinga (Tor) 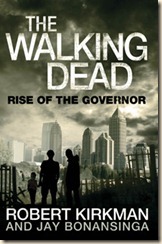 Set in the world created by Robert Kirkman, this is the start of a standalone trilogy with new characters and new storylines.In the Walking Dead universe, there is no greater villain than The Governor. The despot who runs the walled-off town of Woodbury, he has his own sick sense of justice: whether it’s forcing prisoners to battle zombies in an arena for the townspeople’s amusement, or chopping off the appendages of those who cross him. The Governor was voted “Villain of the Year” by Wizard magazine the year he debuted, and his story arc was the most controversial in the history of the Walking Dead comic book series. Now, for the first time, fans of The Walking Dead will discover how The Governor became the man he is, and what drove him to such extremes.

I should probably start this review off by clarifying that I haven’t seen The Walking Dead on TV, nor have I read the graphic novels. However, if The Rise of the Governor is anything to go by, I will be checking them out for sure, even if I have had my eye on them for a while now.

Although I understood what was happening for the most part, I didn’t really work out what the Governor had to do with it until the very end. I had a rough idea as to who was to become the Governor, but Kirkman and Bonansinga have managed to surprise me as to his identity – I don’t know if his identity is mentioned in either the graphic novels or the TV show, but it was a constant source of mystery to me in the novel – I knew that there was going to be an appearance of somebody called “the Governor” featuring at some point in this novel, I just didn’t know who it was until the end. After some research, I’ve seen the Governor described as a villain in comic book lore that has almost as much of a reputation as Darth Vader. Now, I don’t know about you, but this novel really didn’t go into what atrocities the Governor would later commit, but I’m guessing those are covered in the graphic novel and TV show.

The story follows four main characters and their adventures across the wasteland that was once America. Phillip Blake and his daughter Penny are the main characters, alongside Phillip’s brother and two of their high school friends. They’re mostly strong characters, but a few peripheral characters weren’t strong enough to be memorable (for instance, I’ve already forgotten the names of the two high school friends and Phillip’s brother). Nevertheless, they are all key players in the story, and each make their own choices that impact the outcome of the novel. Phillip is the strongest character out of them all, and we see him develop throughout the novel.

The plot surprised me. Not only is it strong, it’s also fast-paced, and about as action-packed as you’d expect from your average zombie novel. There are constant shocks that you wouldn’t expect to find, which kept me hooked and there is never a dull moment. You won’t be able to put this book down once you get into it, that’s for sure, and Rise of the Governor proves that it isn’t just an attempt to milk the franchise, but rather a decent novel in its own right – although I can’t help feeling that if I knew more about The Walking Dead, and how evil the Governor is in the graphic novels, I would have liked this novel even more.

Maybe once I’ve read the graphic novels, I’ll come back and give this one a re-read and see if my opinion changes.

Although this novel may not be an original zombie survival story, with plenty of others like it on the market today, you shouldn’t miss an opportunity to read it. The pace is fast and it’s not too long, which you should be able to read over the course of a couple of afternoons.

While Rise of the Governor may not be as powerful or emotional as other zombie survival novels (for example, The Reapers Are the Angels by Alden Bell), it still manages to hold its own, and given the number of zombie novels that are on the market today, that is no easy feat.

All this being said, I did have some issues with Rise of the Governor. Chief among them was the ending. Although I didn’t see it coming, I found the conclusion to be rushed, which was a real shame – particularly after the great first three quarters of the novel. This meant the novel didn’t have as much overall impact as it could, if the ending had been rounded off better. I don’t know about you, but TV/comic/videogame novel adaptions seem to be a lot better than novel adaptions of films (in my experience anyway), so I will be looking out for more like this in the future.

Whilst I can’t say that a Walking Dead fan would enjoy this or not, given my lack of familiarity with the setting, I would say that you should still give it a go if you find zombie-survival fiction appealing.