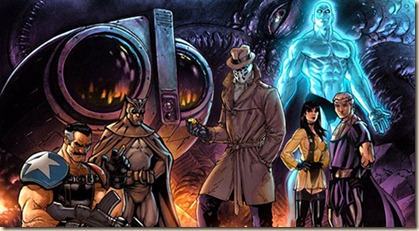 Last time I talked about Before Watchmen, my experience with these prequel series had been largely positive, with the exception to Brian Azzarello’s Comedian #1, which I rather disliked. The other three, Minutemen #1, Silk Spectre #1 and Nite Owl #1, I’d really liked and couldn’t wait to read more. You can find my review of them here. So it was with quite a bit of enthusiasm that I dipped back into the Watchmen-verse this month. 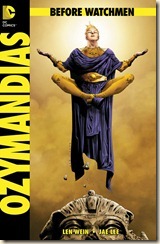 “I have goals to achieve. Dreams to make come true.”

This left me largely disappointed. Adrian Alexander Veidt is the smartest man in the world, but the story fails to really convince me of that. It treads a rather beaten and clichéd path, telling the story of a repressed boy who grows up into an emotionally detached and self-centred individual whose only care is to be at the top of the food chain. All this makes Adrian a callous man who doesn’t care one jot about the consequences of his actions, and only about establishing his dominance.

By the time we are done with the script, he is just about to embark on becoming Ozymandias, the smartest superhero crime-fighter in New York. At least that’s what I deduce. That this follows the loss of someone close to him didn’t really work for me, either. There is just too much detachment in him and I fail to believe at any level in his motivations and his desires. 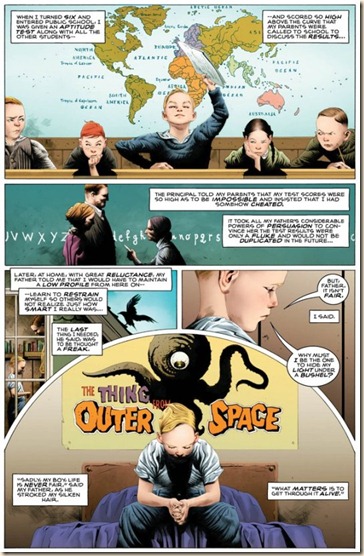 Then there’s the artwork by Jae Lee, which also failed to draw me in. The aspect of the art that really bothered me was how Lee draws faces and exposed skin. He gives the impression of depth through masses of shaded lines, and when he does the same thing with the character faces, it really jars for me. It’s a style that puts me off. Plus, almost all his male characters have a very thin head of hair. A really small thing to notice, to be sure, but it makes me hesitate and practically leaps off the page at me.

In terms of art, the only two good things about this issue are the second and third variant covers, by Phil Jimenez with Romulo Fajardo Jr., and Jim Lee with Scott Williams & Alex Sinclair, respectively. Looking at that second cover, I really wish that they had gone with Jimenez and Fajardo’s style for the characters. It is much more... believable. 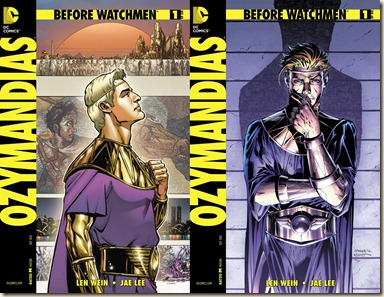 Overall, I’m not impressed by this issue at all. And I won’t be continuing with the series at all either. I was looking forward to this mini-series but it has proven to be too disappointing. 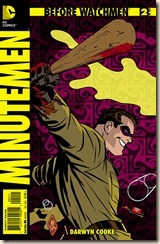 “This isn’t a book. It’s a bloody confession!”

On the flip side, Darwyn Cooke continues to impress with Minutemen #2, which furthers the story of the group as Captain Metropolis finally gets them together and they begin undertaking joint missions. I really liked this issue, all things considered. The character arcs went mostly where I expected them to go, but some were a real surprise.

In the first issue, I’d been really drawn to Hollis Mason’s Nite Owl and Ursula Zandt’s Silhouette. Their stories seemed to be very real and believable because they were superheroes in the style of Superman and Wonder Woman: they cared about the people they were protecting, they had a very human connection with their work. This issue carried that forwards with a nice touch, as these two team-up in the second half with Mothman for a case that Silhouette has been working on – the child-trafficking ring that we saw in the previous issue. With this, Darwyn explores what makes each of them tick, why they are in the Minutemen to begin with, and how they relate to each other. This was perfect. 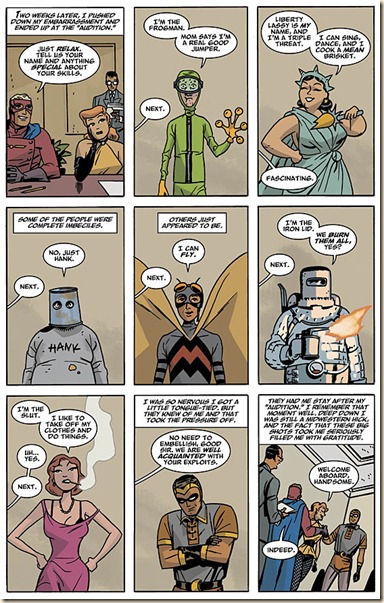 On the other hand, we have Captain Metropolis, Silk Spectre and Comedian, individuals who seem to be involved for the popularity and even the money. With Sally’s agent working as their PR guy, that’s taken to the next level as even one of their screw-ups is turned into a media campaign in which the group comes off as heroes. This serves as a great counterpoint to the other arc with Nite Owl, Silhouette and Mothman, and the contrast really works. It shows that there is some dissension within the team and that while everyone’s objective is the same, their methods are very different, as are their motivations and their expectations.

One thing that confused me was where Darwyn is taking The Hooded Justice’s character. His homosexuality is touched upon in this issue and it surprised me. It takes the comic to a whole new level from the previous issue. The overtures made by Sally’s agent, Laurence, were also surprising, because I lacked the necessary context to see what it all meant and why he was trying to setup HJ and Sally together as an item to sell to the media. Since then, though, I spent a few minutes on the Watchmen Wiki to learn more about him and I see where it is all headed. It adds that “darkness” that was slightly missing in the mini-series and that I remember from the movie.

In terms of art, this is a really great issue. The vibrancy and sharpness that defined the first issue is present here as well. Soft colour palettes, great contrasts, and some really cinematic moments 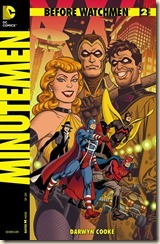 make it a complete visual experience, just like its predecessor. Darwyn Cooke and Phil Noto have done an excellent job here with all the art panels.

My only gripe, a really minor one, is that they should have gone with Jose Luis Garcia-Lopez and Trish Mulvihill’s variant cover rather than the one by Darwyn Cooke. The former speaks more of the tone and mood and objective of the issue rather than the latter because it is a group shot, not a Comedian shot. That’s really it.

Overall, great job by the creative team, and I’m totally sold on this mini-series. 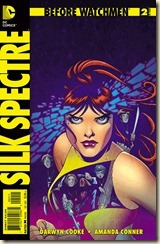 “I’ve just come to a horrible realization... My mom would be really proud of me right now.”

Next is another Darwyn Cooke presentation, working alongside Amanda Connor.

From the very first pages of the issue, we are promised an explosive script: we meet Laurie in an out-of-the-way ruined building where she is attempting to save a man from being killed by a quartet of drugged-up nutjobs. It totally sets the mood for the rest of the issue. The script is presented, for the most part, as Laurie writing a letter to her Uncle Hollis, the first Nite Owl, as she assures him that her life in San Francisco is great and that she is putting the lessons her mother taught her to good use. As she says, “For the first time ever, my life is an adventure.” 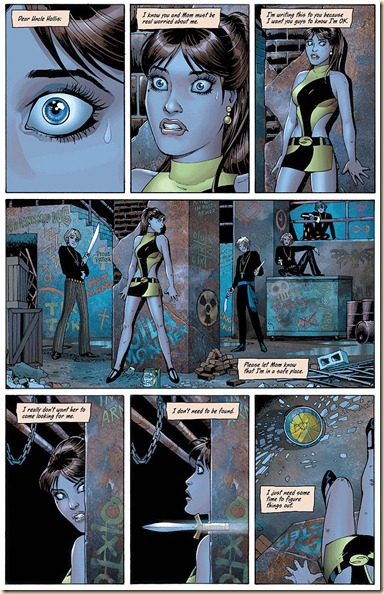 This issue is all about Laurie growing into her new-found role as a crime-fighter, one grounded in the realities of a fun, enjoyable life together with her new friends and her boyfriend. It’s a very personal issue, enhanced by the use of the letter as a device to tell most of the first third of the script. It really pulls you in. Given the time that the story is set in, we also see how her environment in San Francisco has an effect on Laurie and her friends, such as public protests, drugs, “hippy” culture, etc.

What I really loved about the issue is how well Cooke and Connor mesh the artwork and the script to great effect, and deliver the full package. One of the most telling instances of this is when Laurie imagines that she is someone else, perhaps a pirate or a wealthy heiress who doubles as a crime-fighter. Such a small thing, but it really pulls you into the story. 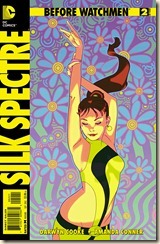 Speaking of the art, we get more of the same as the previous issue. There is a touch more of a modern look, mixed in well with the old Archie-style that is so endearing. The most fun art is in the panels which either show Laurie as really ticked off, really surprised or just super excited. There is a warmth to those scenes that’s really great.

This issue is also far more risqué and mature than the previous. There is some inconsequential swearing, but more than that are some of the art panels featuring topless women at parties, or scenes of intimacy between Laurie and Greg. However, neither of these scenes is intended to shock. The latter conveys Laurie’s personal growth and her new life, while the former shows how life in general is in San Francisco at the time, with the new wave of “hippy” culture finding purchase in the city.

Overall, this is a fantastic issue that once again sells me on this mini-series and makes me want to stick with it. Kudos to the entire team. Finally, we have Brian Azzarello’s Comedian #2, which was (again) a major disappointment. At this point, I think this particular mini-series just isn’t for me, and it’s not working for me at all on any level. The artwork is great, sure, but the script leaves me cold. I keep wondering if the story is just too nuanced for me to appreciate, given how involved Eddie Blake is with the Kennedy family, his inherent sadistic nature, and his clichéd badassery. 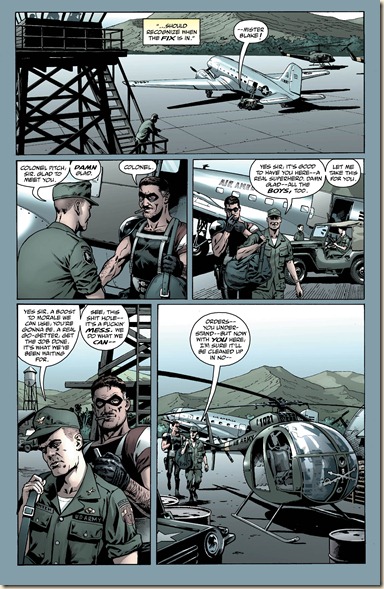 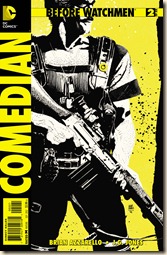 substance. It’s as if there are entire panels missing from this issue.

Another thing: there is a particular scene involving the Comedian and some of the top brass of the American forces in Vietnam. It’s all just one case of swearing after another, these guys swearing worse than sailors. The entire two-to-three pages do absolutely nothing for me other than tell me that these are all just nutjobs.

I don’t know. Comedian just isn’t for me I guess. I’m entirely done with this mini-series.

This month also we get four more two-page instalments of Len Wein’s backup story. Our hero finds himself in the clutches of a pirate captain – no less a stature than Davy Jones himself and aboard the Flying Dutchman. The constant small instalments really don’t work so well, and these four particularly contain too much beating around the bush as Gordon McClachlan is treated to a rather long introduction to his new friends. While I enjoyed the first four instalments, with these new ones I find myself rather ambivalent.

Taken as a whole, then, the first two months of Before Watchmen have certainly been divisive. On the one hand, Darwyn Cooke, Amanda Connor and J. Michael Straczynski have given us the great Minutemen, Silk Spectre and Nite Owl mini-series, while Len Wein and Brian Azzarello have failed to impress with Ozymandias and Comedian. This is somewhat disappointing, for sure, but I can only hope that Azzarello’s Rorschach and Straczynski’s Dr. Manhattan really up the game (both due in August), for they need to. The only consistent aspect of the entire prequel initiative so far has been the artwork, and especially the covers and variants. If you don’t want to read the series, at least get the covers, if you can (the images are widely available online, if nothing else): they are definitely worthy of being part of any collection.