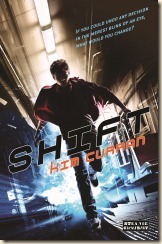 When your average, 16-year old loser, Scott Tyler, meets the beautiful and mysterious Aubrey Jones, he learns he’s not so average after all. He’s a “Shifter”. And that means he has the power to undo any decision he’s ever made.

At first, he thinks the power to shift is pretty cool. But as his world quickly starts to unravel around him he realises that each time he uses his power, it has consequences; terrible unforeseen consequences. Shifting is going to get him killed. In a world where everything can change with a thought, Scott has to decide where he stands.

There seems to be a new sub-genre developing in YA fiction, focusing on various forms of time-travel or inter-dimensional travel. Recent great examples include E.C. Myers’s Fair Coin and Ian McDonald’s Planesrunner. Now we can add Kim Curran’s Shift to the genre’s growing ranks of quality novels. In her debut, Curran has written an intriguing world of limited time-travel (it reminded me a little of the dynamics in the Nicholas Cage movie, Next). It’s an excellent introduction to the setting and characters, and despite a couple of niggles, I certainly enjoyed reading Shift.

As the synopsis states, Scott is your average teenage school-boy, trying to get through high school in one piece. His family life is a little fraught, his parents bicker and argue all the time. The only solace he finds at home is on his own or with his younger sister. Then a dare goes wrong, and Scott unconsciously Shifts to save his life. Aubrey approaches him, and things start to get very weird, very fast for our new hero. He will encounter former-Shifters, and predators of the most horrific sort, all while having to maintain a grip on which reality he is actually in – unlike many Shifters, you see, he is able to hold on to the memories longer.

I really like the premise and story – it’s quick-paced, and throws us into the Shifting early on, without dragging it out. Some readers might think Scott’s world changes too quickly and that he becomes proficient rather rapidly (a common concern with debut novels featuring a character’s power-awakening), but in Shift it does serve the plot, rather than convenience.

The Shifting itself is very well done. Curran has thought of and covered almost all of the angles, and I really liked the way she’s woven the Shifting into the story and how the choices they make can alter the characters’ realities. There are a lot of nice touches throughout. One thing, though, was that I think the Shifters’ memories could have been developed a little more – I’m not really sure how it would work, of course, but if they lose the memories of the other realities after they Shift, then how do they know they’ve ever Shifted? A minor concern, but one that popped into my mind on a couple of occasions.

The characters are really well-drawn, and the key characters develop nicely over the course of the novel as well. They’re varied, colourful, and don’t come across as two-dimensional. Some of them are perhaps “typical” of this type of story, but Curran makes them work and her original twist on time alteration makes the novel feel fresh and engaging. One character in particular – Benjo – is absolutely horrific, and Curran does a good job of weaving him into the narrative.

That being said, a couple of important events are wrapped up rather quickly; events I thought could have been expanded on a little bit. Some of the scenes with Benjo, for example, felt just a little rushed, and I thought that expanding them would have made them feel a bit more perilous. A villain does learn the lesson that to speechify is to invite defeat, though, so one can understand why certain scenes were very fast-paced. I do think Curran could have relaxed and expanded many of these moments without compromising the quality of the novel or fluidity of the story.

There’s a pretty cool Matrix-esque awakening at the end, which I didn’t completely understand, even if it was only short-lived. There’s little-to-no discussion, reason, or explanation given as to why it happens. This is a pity, as I thought it was rather inspired. It suggested there’s a lot more about the Shifting powers that has yet to be explored and studied.

The story is focused very much on introducing us to the world of Shifting, but doesn’t give us too much information. Some might wish that there’d been a little more exposition and exploration of Shifting and the characters involved, but Curran’s prose kept the story rattling along at a quick pace. It was very hard to put this down. There’s still plenty of potential to explore. It feels very much like an opening act, and it’s one that has certainly piqued my interest. I would certainly come back for more stories in this setting.

This is a very good debut novel. I’ll definitely be keeping an eye out for Curran’s next novel.

The sequel to Shift will be published in the second half of 2013, and is tentatively titled Control. At the moment, the series is a projected trilogy.