“The Litigators” by John Grisham (Hodder) 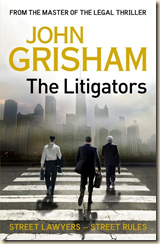 The latest legal thriller from the master of the genre

David Zinc has it all: big firm, big salary, life is in the fast lane.

Until the day he snaps and throws it all away.

Leaving the world of corporate law far behind, he talks himself into a new job at Finley & Figg. A self-styled ‘boutique’  firm with only two partners, Oscar Finley and Wally Figg are ambulance-chasing street lawyers who hustle nickel-and-dime cases, dreaming of landing the big win.

For all his Harvard Law Degree and five years with Chicago’s top firm, Zinc has never entered a courtroom, never helped a client who really needed a lawyer, never handled a gun.

All that is about to change.

Ever since I read Grisham’s The Brethren over a decade ago, I’ve been a big fan of the author’s work. I’ve tried to read as many of his new releases as possible (one day I’ll probably try his YA thrillers), as well as catch up with his back catalogue (to date, I’ve managed to read 15 of them). There have been very few disappointments, and each new novel I’ve found addictive and engaging. In fact, there’s only been one Grisham novel that I’ve not been able to finish (The Street Lawyer), despite trying to read it twice. I have no idea why I can’t get into that one. Anyway, with The Litigators, Grisham is on good form and, despite a second-half wobble, I was not disappointed; it was a very enjoyable read.

In fine Grisham style, we are introduced quickly and expertly to the key characters. The dysfunctional three members of Finley & Figg: Oscar Finley, the street cop turned irascible street lawyer, getting on in years, in a dead-end marriage and basically ready for retirement. Wally Figg, the hustler and ambulance-chaser, always chasing the big score. David Zinc, Harvard-educated, mega-firm burn-out, idealistic and eager to change his life. And, of course, there’s the ever-put-upon legal secretary (who basically runs the place). Zinc’s introduction is the longest, as he goes on a single-day bender after suffering from a panic attack at his firm, and just bolting. He snaps and decides everyone at the firm can go screw themselves. By accident, he ends up at Finley & Figg, asks for a job, and after a couple of moments of drunken bravado, is hired.

What follows is basically Zinc’s education in street law – miles away from the glittering boardrooms and hundreds-of-dollars-per-hour fees. He learns from Figg all about ambulance chasing and how to deal with the less salubrious, wealthier clientele that Finley & Figg attracts. Zinc also gets caught up in Figg’s latest money-making scheme (his endless, fanatical hunt for the next get-rich-quick scheme is certifiable) – filing suit against a pharmaceutical company for a “bad” drug, and getting caught up in a mass, nation-wide tort case. While Figg is becoming star-struck by the experts who fly in to “help him out”, the pharmaceutical company starts its own maneuvers to put down Figg’s and everyone else’s cases. Things do not go well, and the novel builds to a final-third courtroom drama, as Finley & Figg battle their way through an increasingly-difficult case and near-endless personal battles and obstacles. I really enjoyed the realistic portrayal of the characters: Grisham gives them plenty of quirks, and their interactions felt very natural – especially the way they get on each others’ nerves and bicker. Given the types of characters in the novel, there’s also a good deal of humour – wry, cynical, and situational – which was a nice change, something I’m not used to from Grisham.

The Litigators also benefits from the lack of a rose-tinted filter. Yes, Zinc does pull off a win at the end of the novel (though not the one you’re probably expecting), but it comes after quite a grueling ordeal and also plenty of time to realise just how awful some of these characters are. Even the ‘heroes’ aren’t particularly noble, and certainly not respectable characters. They are petty, selfish and greedy – but that, I think, is Grisham’s intent: to show the effects of these mega-tort cases, how the little guys (Finley, Figg and Zinc, but especially the plaintiffs that are rounded up) get completely taken advantage of by the bigger fish, only to be shafted when things go badly. Really, very few characters come across as anything other than reprehensible. And that’s a good thing. We root for them all because of their flaws. Figg and his ridiculous schemes; Finley and his awful marriage and desire to just have everyone leave him alone. Zinc’s idealism and on-the-side pro bono work are probably the only rays of sunshine.

The Litigators is far more about the characters than the law, which was a nice change (although, I must admit that I do love the law stuff Grisham includes in all his novels). One more comment about David: while he certainly grows and develops as a character over the course of the novel, it wasn’t until the final quarter that I truly believed he’d gone to Harvard – he came across as surprisingly dense at times, quite ignorant of some supposedly important and key elements of the law. However, his masterful handling of a difficult situation ends up saving the day for Finley & Figg, and at that point it was possible to accept that he had been so well educated.

The Litigators is an interesting novel. It seemed to wobble a bit once the trial began – it felt dragged-out, even though the result is quite obvious from before it begins. The story does rally in a good, exciting manner (if rather out-of-left-field, and perhaps in a bit of an irrelevant way). The end falls perfectly within the “Small Dog Eats Big Dog” oeuvre. Some of the tactics employed by both the defence and plaintiff teams are highly cynical, which is something Grisham is very good at showing – he doesn’t hammer readers about the head, but rather inserts asides and comments that lay bear the Machiavellian tactics and cynicism of these lawyers.

I don’t think this novel is as good as his previous, The Confession (which I thought was superb), but it is still high-quality. If you’re a fan of Grisham’s previous novels, then I would definitely recommend The Litigators: it has the great pacing, deft characterisation, and addictive story-telling we have come to expect from the author.

I thoroughly enjoyed this, and really can’t wait for The Racketeers (published in October 2012).

Posted by Civilian Reader at 12:15 PM