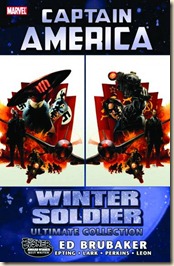 A midnight call to duty brings Captain America aboard the S.H.I.E.L.D Heli-carrier to identify the corpse of his most feared adversary: the Red Skull. The shocking murder of Cap’s oldest enemy may not be the end of the Skull’s plans, however, because whoever shot the Skull has stolen his final project: an unfinished Cosmic Cube with the potential power to alter reality itself.

Adding to the imminent danger, a cadre of the Skull’s followers has already set in motion a plan to ignite bombs in the hearts of Paris, London and Manhattan – causing untold death and destruction. Racing against these bombs’ rapidly ticking clocks, the Star-Spangled Avenger must not only solve the mystery of his nemesis’ murder, but find the Cube before it can be used in the Red Skull’s malevolent plot against the United States!

Then, the questions plaguing Captain America’s dreams and memories have been answered in the most brutal way possible. And in the wake of this brutality, General Lukin makes his first all-out assault – tearing open old wounds and threatening to make new scars that will never heal.

I really enjoyed the new Captain America movie, and have also enjoyed a few issues of Marvel’s new Winter Soldier series (which I took a chance on largely because of Lee Bermejo’s covers, but also because I was looking for something new). I wanted to try out some Captain America graphic novels, but they all seemed a little out of my price range. So, when I saw this book in BMV in Toronto (a big discount bookstore – this was 60% off), I took it as a sign, and decided it would be a great point to start my Captain America reading. Brubaker’s take on the character was also recommended by a couple of friends. I thoroughly enjoyed this, and I hope to catch up with the rest of Brubaker’s run on the series.*

In this story there is a Cosmic Cube, just as there was in the movie, and also Red Skull – only here, Red Skull doesn’t last for very long, as a mysterious assassin takes him out and steals the cube. While investigating the murder, Captain America uncovers part of the Skull’s plans – incendiary bombs below Manhattan and a couple of other major cities. What else is going on, and who is calling the shots?

Well, the title probably gives it away... I enjoyed the story of Winter Soldier, and I think Brubaker has done an awesome job of bringing nuance, atmosphere, and a thriller’s tension to the story. The book is filled with great action, great pacing, and plenty of thoughtful passages as well. It’s not all wham-bam action. (Or “kapow”, even.)

As someone not familiar with the long Captain America canon, it was very nice that Cap is having a problem with vivid memories intruding on his dreams and waking hours, which helped to fill in a little bit of background detail and catch this new reader up to the present. We learn a lot about Cap’s World War II years, and also about Bucky and his demise (which, I later discovered, was never actually portrayed in a comic up until this point). Readers will get some information about the successor Captain Americas after Steve Rogers’s ‘death’, and also the replacements for Bucky (there’s an amusing comment about how a replacement was ridiculous, given how old Barnes had become and how young his second was, and disbelief at how people believed it anyway).

The book has a very nice introspective, moody atmosphere – I really liked this version of Captain America, and I thought the balance between investigation, introspection and action was brilliant. Cap is distracted and not exactly the confident hero we’ve been led to believe he is. This is reflected in the artwork, which is quite shadow-heavy. The art style for the flashback sequences is also very nice, slightly different, with a less-sharp quality that makes it akin to watching old video footage (if in colour). The artwork changes for chapter #9 – I don’t think it is as good as Epting’s artwork, which makes up the bulk of the book, but Lark still did a very good job. The artwork is also different for “The Lonesome Death of Jack Monroe”, an extra story at the end of this collection, which really tugged on the heart strings, I thought, even though I had no previous experience or knowledge of who Jack Monroe was. (artists John Paul Leon & Tom Palmer handled this story).

Overall, I really liked the breadth of the story contained in this book. There’s so much going on, everything is brilliantly tied together and plotted, and I was hooked from the beginning.

This is very highly recommended for anyone wanting to make a start on Captain America. I’ve already finished Red Menace, the next collection, and I’ll write and post a review in the next week or so.

* For some reason, Marvel have re-started the numbering for Captain America. It’s still written by Ed Brubaker, but I have no idea how it ties in with the events of this run on the series. The first collected hardcover is already out.

Posted by Civilian Reader at 4:58 PM