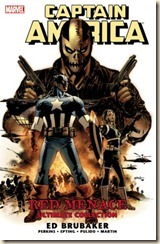 Six months ago, Crossbones kidnapped the Red Skull’s daughter, Sin, from a government re-education facility and disappeared into the night. Now, he and his spawn of infinite evil have come to the American Midwest to tear a new hole in A.I.M. – but none of them counted on Cap and Agent 13 stumbling into the mix.

The second volume in Brubaker’s run on Captain America picks up the story and expands on Cap’s history and the canon surrounding the character and some of his most infamous nemeses. It’s dark, gritty, action-packed and quite gripping.

This book starts shortly after the Winter Soldier storyline ended, with Red Skull’s former-minion and right-hand-hatchet-man Crossbones attempting to re-indoctrinate the Skull’s daughter (who he broke out of a S.H.I.E.L.D. re-education camp in Volume 1). There were some scenes in this chapter that were reminiscent of V For Vendetta.

There isn’t a seamless move from the first story arc to this one – for example, Nick Fury has suddenly gone underground. This is no doubt an example of how frustratingly interlinked the multitude of Marvel titles have become. (As far as I can tell, it’s only got worse, too.)

Captain America and Sharon are on the trail of Crossbones and Sin, who have been tearing up a bloody trail across parts of America. Crossbones’s rampage conveniently puts our heroes onto the trail of Bucky “Winter Soldier” Barnes, who is still getting used to his restored memories, and attempting to acclimate to the fact that he has been in-and-out of suspended hibernation for decades and manipulated by the Russians to act as a super-assassin, ever since he was thought dead and rescued by the Russians in World War II. So yeah. He has a few issues.

The story is great throughout, and really manages to maintain the momentum of the Winter Soldier story. Effectively, an evil, Machiavellian CEO, Lukin, is up to no good – he featured in the previous book, but in Red Menace his agenda and encroaching madness come to the fore and play a central role in Captain America’s and S.H.I.E.L.D.’s troubles. While very enjoyable, this story arc didn’t feel quite as focused as Winter Soldier.

I think the only problem I had with this book is the 65th Anniversary section in the middle. It’s not that it was bad, per se (it adds some extra layers to Cap, Bucky and Nick Fury, their histories, and also explains some of ‘current’ Bucky’s actions – it also sets a few things up for the final two chapters). It’s just... Well, I think it went on just a little too long, and at the time felt like quite a segue. The artwork took on a nostalgic style, which is fine on its own, but when compared to the excellent artwork for the story-proper it just doesn’t have the same impact. 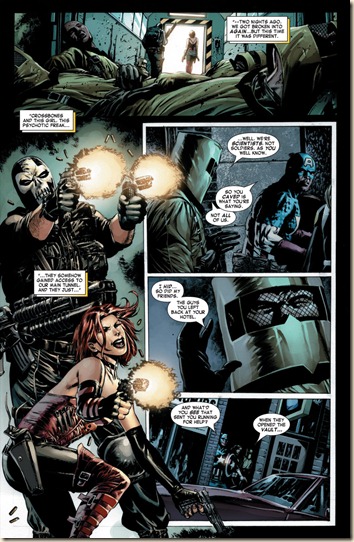 Towards the very end of the story, Brubaker sets up (in the background) some of the catalysing events that led to Marvel’s Civil War event – a cross-series event I am actually quite interested in reading, despite me general cynicism towards Marvel’s “events”.