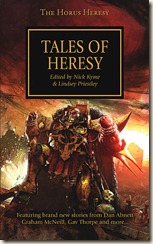 When Horus the Warmaster rebelled against the Emperor, the ensuing civil war nearly destroyed the Imperium. War raged across galaxy, pitting Astartes against their battle-brothers in a struggle where death was the only victor.

Black Library’s Horus Heresy series has been a huge success, adding extra layers of detail and understanding to the background of Games Workshop’s popular table-top wargaming universe. Up until now, there have been nine novels in the series, but Tales of Heresy offers up seven short stories that take a look at less grand vistas of the time. For example, Dan Abnett’s opener, “Blood Games”, introduces us to the Custodes, the elite guardians of the Emperor and his palace on Terra. This story was pretty good, and featured Abnett’s breathless action-writing as we have come to expect it. However, given the short length, and the amount that is packed in, it felt rushed (three missions are covered in just 50 pages) and there wasn’t the space for the author to flesh out his characters (something he is very good at in the Gaunt’s Ghosts series).

The other stories in this volume are a mixed bag, providing some innovative approaches to the age. There are three tales of expeditionary forces from three Space Marine legions, two loyalist and one that would eventually turn to Chaos: Mike Lee’s “Wolf at the Door” covers the Space Wolves and a mission to a newly discovered planet (it should also help whet people’s appetites for Graham McNeill’s A Thousand Sons and Dan Abnett’s Prospero Burns, which will feature the Space Wolves); Anthony Reynolds writes from the perspective of the Word Bearers in “Scions of the Storm”, as they assault an enemy bastion. Gav Thorpe’s “Call of the Lion” covers a Dark Angels attempt to being a world into compliance with the new Imperium edicts.

The remaining three stories are the ones that grabbed my attention more because of their different approach and content. “After Desh’Ea”, by Matthew Farrer (the last story in the anthology), follows the days after the discovery/reunion with the World Eaters (then known as the War Hounds) primarch, the somewhat psychotic Angron, and his integration into the rigid structure of an Astartes Legion after growing up on a savage world of battle. James Swallow’s “The Voice”, is about a group of Sisters of Silence and their hunt for a missing Black Ship (effectively Imperial prison ships for the Chaos tainted and newly found psychics).

Finally, the most interesting story in the book, “The Last Church” by Graham McNeill. This last story is very topical, as a priest is confronted by a secularist, who introduces himself as ‘Revelation’, asking questions of the priest, about

“what keeps you here when the world is abandoning beliefs in gods and divinity in the face of the advances of science and reason.”

For the chosen forum to ask such questions, McNeill has done a good job of writing an intelligent, interesting dialogue on the place of religion in modern society and life. Some of the observations aren’t new, such as Revelation’s point, “Politics has slain its thousands, yes, but religion has slain its millions”. Definitely a nice surprise to find it in this volume. The story also contains perhaps the only honest appraisal of what the Emperor’s grand vision, painting a picture of such narrow-minded arrogance and self-belief. (Like some other reviewers, I think “The Last Church” would have worked better as the last story in the anthology, much more powerful is its content and message, not to mention the strength of the McNeill’s writing.)

Overall, I would say that, if you’ve been following the Horus Heresy series, or are a fan of the Warhammer 40,000, then you will probably like some, if not all, of the stories within. The stories are all pretty good, some clearly better than others, but if nothing else, they’re really handy time-fillers if you can’t decide on what to read/review next (this is how I ended up reading them).