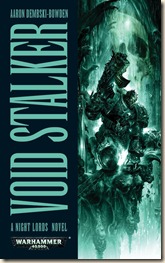 The Conclusion to the Night Lords Trilogy

The hunters have become the hunted. The Night Lords flee to the dark fringes of the Imperium to escape their relentless pursuers – the Eldar of Craftworld Ulthwé. Their flight takes them to the carrion world of Tsagualsa, where their Primarch died and their Legion was broken. There, history will repeat itself as a deadly assassin stalks the shadows, and the Night Lords are drawn into a battle they are destined to lose.

It’s no secret that I’m a huge fan of Aaron Dembski-Bowden’s fiction. I think he is ridiculously talented, and his novels and short stories are all among my favourite sci-fi stories. In this final volume in his Night Lords series, in which he has managed once again to humanise what are effectively super-human terrorists, he ties up all the plot points into a very satisfying conclusion. Superb. Again.

From the very first pages, this book had me hooked. The novel opens with one of Dembski-Bowden’s favourite narrative devices – the flash-forward, before taking us back and laying out the events that bring the characters to the painful scene of the prologue (and beyond). This is a great way to add and build tension in the story, as we try to figure out how events are going to unfold. The novel is quite a broad one, and a hell of a lot happens. As it is the third in the series, I’m going to keep plot-discussion to an absolute minimum. Suffice it to say, the Night Lords go to war; put into motion a truly inspired-if-horrific plan to disrupt the Imperium in an entire sector; and battle their internal and external demons, not to mention each other. In addition, the visions of Talos, the Prophet of the Eight Legion, start to converge with reality.

There’s nice growth and genuine character development – not only within this novel, but across the whole series. Each character bears the marks (often scars) of what they’ve experienced over the course of these three novels and the few short-stories as well (the latter are not essential to follow the story, but they do add a nice extra level of detail).

Talos, newly risen to commander of this Night Lords raiding party, remains the central figure and also one of the most interesting characters in WH40k fiction – rivalling the Primarchs in my mind (not in power, presence or ability, but I find him utterly engaging and fascinating). He is a creature of two sides (“man” is not the right word): one is thoughtful, reasoned, noble and even caring of his subordinates and slaves. The other side of his character is cold and calculating, vicious and cruel, savage and brutal. He sets in motion a truly horrifying and wide-spread revenge for the colonisation of Tsagualsa (the Night Lord’s second homeworld, where Konrad Curze met his end). He makes calculating command decisions, and is coldly dismissive of the collateral damage among the non-Astartes crew and slaves.

Talos’s duality is mirrored in the other Night Lords, and is fully on display in Void Stalker: their nobility and rationality (frayed as it is in some members of the warband) is juxtaposed by their savagery and sadism when unleashed in combat. The Space Wolves, World Eaters and Flesh Tearers are… enthusiastic warriors, but the Night Lords’ stock-in-trade is, basically, superhuman terrorism. And they not only are very good at it, but they relish it. When asked why the Night Lords will murder entire planets, why they skin their victims, Talos replied dispassionately:

The novel has plenty of edge-of-your-seat combat, particularly close-combat scenes. Of particular note, Xarl, the combat-master of First Claw, is involved in one of the bloodiest single combat scenes I’ve ever read. While battle is, of course, important to the story, there’s a lot more going on in the novel. The author’s combat scenes are superb, but his real skill (unrivalled among Black Library’s stable of authors) is in creating engaging characters. This series is, at heart, a character study. It’s very well-constructed and written, and is a thoughtful and thought-provoking military sci-fi novel. I’ve said it before, and I’ll say it again – Dembski-Bowden blows all tie-in fiction conceptions out of the water.

Dembski-Bowden has done it again – he’s managed to make sadistic killers into sympathetic figures. Talos is a superb central figure, surrounded by well-written, three-dimensional characters and companions. The story builds to a final crescendo of battle, as the tensions within the Legion and Talos’s premonitions merge with reality. It’s bloody and intense. The body count is huge. One death in particular was so surprisingly tragic and moving, I almost shed a tear. The novel has three epilogues (an interesting decision), and the final one is incredible – and really makes me wonder if we’re going to see more of the Night Lords in the future.

Fifteen years ago, Dan Abnett reinvented WH40k fiction with his Gaunt’s Ghosts novels. With the Night Lords series (and also The First Heretic), Aaron DB has perfected it. He’s easily among my top five favourite authors. He is a genius at writing nuanced, complex characters. I will read anything he writes.

Very highly recommended, Void Stalker is a masterful conclusion to a superb series.