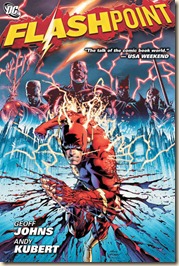 Not a dream, not an imaginary story, not an elseworld. This is Flash Fact: When Barry Allen wakes at his desk, he discovers the world has changed. Family is alive, loved ones are strangers, and close friends are different, gone or worse. It's a world on the brink of a cataclysmic war – but where are Earth’s Greatest Heroes to stop it? It’s a place where America's last hope is Cyborg, who hopes to gather the forces of The Outsider, The Secret 7, SHAZAM!, Citizen Cold and other new and familiar-yet-altered faces! It’s a world that could be running out of time, if The Flash can’t find the villain who altered the time line!

Flashpoint is a very good graphic novel, with a pretty interesting premise, ably executed by its creative team.

Everything is very different for Barry Allen when he wakes up at his desk. The world has been turned on its head, and it takes him a little while to get to grips with it. Not only that, his memories of the ‘real’ world are starting to fade. What’s more, he doesn’t have his powers. Therefore, he must set out to not only discover how this apocalyptic version of the world came to be – not to mention reverse it if possible and in time, but also attempt to regain his super-speed.

I don’t have any knowledge of the Flash comic series, but I still found this pretty easy to follow: the cast is pretty huge, and you’ll see cameos from a good number of DC’s main characters – including Batman, Wonder Woman, Aquaman, Superman, Grifter, Deathstroke, the Enchantress, and many more. Because of my familiarity with a fair few of these characters (thanks to the New 52), it was nice to see some pretty cool alternate takes on such a wide variety of DC heroes. I particularly liked the idea of Wonder Woman and Aquaman at each others’ throats, in the middle of a globally destructive feud.

Johns’ writing is great, as is Kubert’s artwork. I would definitely like to check out the other books set in the Flashpoint timeline. This is actually a pretty short graphic novel, so while we get a pretty great introduction to what life in this world is like, we don’t get to stick around and really explore it in any great detail. These companion tomes (much longer than this book) should allow for more exploration.

Apparently, this event was connected to the then-upcoming launch of the New 52 in some way, but I didn’t spot it at all. If anybody has an idea, feel free to leave some thought and observations in the comments thread.

Overall, I would say this is definitely recommended to anyone who wants to read an interesting, slightly darker take on a near-apocalyptic version of the DC Universe. It’s a great book.