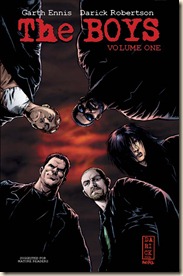 Who watches the Super Heroes?

Don’t miss this dark, twisted look at super – people, and the men and women who make sure the world's “heroes” never go too far.

This series has been recommended by a lot of people, and I finally managed to get my hands on the first volume. (That makes it sound like more of an ordeal than it was – all I had to do was go to a bookstore…) It’s quite an interesting title, too – visceral, brutal and imaginative. Definitely not for the squeamish (or the young reader), it has a lot to recommend it, and it’s not hard to see how it’s become a popular on-going series for so long.

This first collected volume is a good introduction to the various sides of the fight. On the one side, there’s Butcher and The Boys – the titular anti-heroes of the series, they are a fascinating group to guide us through this world. Each has their own reasons for being part of the team – a team only just now being brought back together (there’s reference to some past incident that didn’t go well for Butcher et al). The Boys are a CIA-affiliated group of misfits tasked with making sure the plethora of super-powered beings running around the place don’t go too far. The team is diverse, drawn together for a variety of reasons, and are an interesting bunch to follow around. The newest member of the group, a Scot who looks like Simon Pegg, comes to Butcher’s attention after a fatal accident caused by a careless super-hero. It’s largely through his experiences that we learn about this version of our reality. Billy Butcher, the gruff and arrogant leader of the group actually has a very high moral standard. He just also has a handful of narcissistic tendencies, too.

Super-heroes in this reality are not the noble type – they exhibit a far more natural arrogance, narcissism and various other shades of self-involvement that would come alongside exceptional powers. Which brings us to the Seven, an elite group of arrogant superheroes with their own corporate-frat-boy approach to everything – the men are pretty awful male specimens – horrible, repugnant assholes. Their sexism and misogyny are on full display in this book as they “welcome” a new female member to the team. Let’s just say, sexual harassment is apparently not only for the lowly human beings… For them, the fight for justice is about dollars, good media exposure and getting away with basically everything. There’s something about the portrayal of the super-heroes that makes me wonder if there’s a little commentary on the bigger publishers and merchandising in there... It’s not exactly veiled.

In some ways, this comic is pretty ugly, in that it lays bare the worst traits of humanity and also superheroes (assumed and extrapolated, of course). In that respect, it’s a very honest comic, with a more cynical assumption of how super-heroes and super-powered beings would behave in the real world. (If you’ve read Irredeemable, make it even more “mature” and widespread, and you’ll get something of an idea of what this title is like.) It gives us a lot of unvarnished humanity, which makes it a pretty grim, but engaging read.

The series doesn’t pull any punches – it’s not meant to be sanitised, or safe, or comforting. It’s dark, violent, gritty and quite promising. I’ll try to get hold of more of the books, and bring you reviews here.