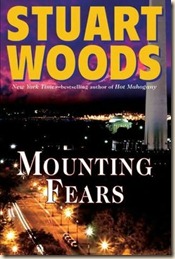 President Will Lee is having a rough week. His vice president just died during surgery. Confirmation hearings for the new vice president are under way, but the squeaky-clean governor whom Will has nominated may have a few previously unnoticed skeletons in his closet. And Teddy Fay, the rogue CIA agent last seen in Shoot Him If He Runs, is plotting his revenge on CIA director Kate Rule Lee — the president’s wife.

Plus there are some loose nukes in Pakistan that might just trigger World War III if Will’s diplomatic efforts fall short. It’s up to President Lee — with some help from Holly Barker, Lance Cabot, and a few other Stuart Woods series regulars — to save the world, and the upcoming election.

This is the third novel by Woods that focuses on Will Lee’s presidency (after The Run and Capital Crimes). It maintains the relentless pacing of the first two novels, but it unfortunately doesn’t address some of the issues I found with the previous books in the series – in fact, the flaws are more pronounced. Entertaining, but thin and ultimately unsatisfying.

[There are spoilers in this review – they were unavoidable, due to my chagrin at how the story played out.]

Mounting Fears opens with a lot of events thrown at the reader. First off, a group of Al Qaeda operatives have taken over a mobile nuclear missile launch station in Pakistan. President Lee must coordinate with Pakistani President Khan as to how to respond. In the meantime, back in the United States, Vice-President George Kiel has gone into surgery for prostate cancer, and has to withdraw from the re-election ticket. The replacement Lee and his team settle on (in lightning-quick fashion), California Governor Stanton, could have some skeletons in his closet, which could throw a spanner into the works. When Kiel subsequently dies, Will moves quickly to appoint Stanton as his replacement. This brings Stanton’s dirty laundry front and centre, which suggests the administration is in for a very bumpy ride. After all, as the FBI Director says, while organising the background check,

“We’ve got a dead vice president, not even in the ground yet, and an appointment of a new one by the president on the fly in the middle of a nuclear event halfway around the world.”

The cynic in me had to raise an eyebrow at anything being done so quickly and efficiently in American politics, but I’m sure it does happen sometimes. On such a major decision, however, I found it a little… questionable.

Stanton’s issues therefore receive the bulk of the author’s attention in the novel. Not only is Stanton in the middle of a divorce (which goes from amicable to toxic seemingly out of nowhere), but there are also rumours of mistresses (which are borne out to be true). So far, so mundane. Stanton has another issue, however, one that is of much greater concern for the confirmation team, and that is the question of his eligibility to be Vice-President in the first place. This, I thought, was a particularly interesting part of the story, as the question of Stanton’s birth and whether or not he is actually an American citizen is an original one, in my experience. The issue plays out pretty much as one would expect, as damage control is dispatched quickly to discover the truth of where Stanton was born (his father worked in Mexico, and the official story is that he was born just after crossing back into the United States). This conceit gave me (at least) an interesting look at the laws of citizenship. It’s not as clear-cut as we are made to believe...

One thing I do like, is that Woods paints a mostly realistic picture of the political calculations the administration makes – they aren’t all noble and for the greater good, as they usually were in The West Wing, but rather purely political calculations usually rule the day. For example, the attempts to diminish the importance and influence of a third party, black Reverend candidate by appointing him ambassador to or assistant secretary of state for Africa – a rather unimaginative solution, to say the least. That same Reverend is also probably, at least in part, inspired by Reverend Jeremiah White (only exaggerated) with, I think, a hint of Newt Gingrich’s buck-raking obsession thrown in for added flavour. Woods is also good at pointing out the ridiculous things politicians worry about, the things that matter and can skewer a nomination or appointment, which in normal life wouldn’t matter – true, this is hardly a novel topic of discussion in political thrillers, but at least it’s done rather well in this series.

There are a few links to Woods’s other series – Holly Barker, for example, who provides some ass-kicking fun as the assistant to a CIA Deputy Director, is the star of Woods’s Orchid series. Also a killer from the past, long-thought dead, comes back to cause Lance Cabott some grief.

There’s a lot of good dialogue, very good pacing (I read the whole novel in about four-and-a-half hours), and decent story. It’s not the best thriller, but certainly not the worst. It’s entertaining and quick, but also rather thin. It’s rude to say so, but I think Woods may have phoned this one in a bit. There’s not a whole lot of sustained focus on any one aspect of the story, which robs the novel of much of its tension at the end – the Pakistan issue crops up at beginning and end; Stanton’s “natural-born” status pops up but ultimately fizzles out at the end; a third-party candidate’s existence seems to be enough to get him targeted by a deranged, scarily-talented hitman (in a development that I didn’t follow); a jilted mistress in a high-powered government job is on the verge of doing something crazy at the end, but is talked down by a simple phone call; an ex-lover of the president persistently and successfully manages to hoodwink his Secret Service detail… And yet, it all ends happily for Will Lee.

Speaking of Will Lee, he is a little less cold and artificial in this book. He’s not much improved, but he’s a little more relatable. As in Capital Crimes, he sort of fades into the background, as other characters come to the fore. I would have liked to see more of the president at work with regards to Pakistan and the search for and confirmation of the new vice-president. Instead, it’s all dealt with rather perfunctorily.

The solutions to all of Will Lee’s problems, and the issues that have run through the novel, are not at all satisfying. It really does feel half-baked and too easy – the non-policy issues are all solved with a phone call at the end by the President, which just left me feeling a little cheated. It’s not that Lee had to act cynically and by brushing problems under the rug (I believe that happens more often than anyone would like to have confirmed), but it just made everything too neat. Perhaps that was Woods’ intention all along – that in politics, even the weirdest, craziest and least-flattering issues and problems can just be brushed under the carpet with, effectively, a bribe, an ego-stroke, or the flexing of presidential muscle.

Regardless, this is probably the last novel by Woods that I read. It was just disappointing. There’s no real tension, and it never feels like the stakes are really that high, despite the story’s potential. If you’re only looking for a quick political thriller to tide you over before you read something else, then this will suit. But there are plenty of novels in the same sub-genre that are infinitely better.

I’m going to be more picky in the future when it comes to political thrillers. Next up will be Philip Margolin’s Washington Trilogy, the first two of which I picked up in Toronto. The series seems to have been rather well-received, so I have high expectations – a review of the first in the series, Executive Privilege, should appear in the next couple of weeks.