An Interview with LYNDSAY FAYE

A little while back, a rather intriguing press package turned up on my doorstep. It was for Lyndsay Faye’s second novel, The Gods of Gotham (which I had originally learned of from Fantastical Librarian Mieneke). As a sucker for anything New York-related, I promptly put it on my TBR pile. And have not yet had time to read it, for which I’m rather annoyed with myself. So, in lieu of a timely review, I decided to get in touch with Ms Faye, and ask her some questions about her work, writing, and so forth.

I thought I’d start off this interview with something easy: Who is Lyndsay Faye? 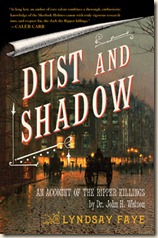 A few years ago, I’d have said I was a musical theatre actress who dabbled in Shakespeare and new works, but then I grew a bit disheartened at the incessant nature of auditioning, the knowledge that even if I did get a good gig, I’d be unemployed again in a few months. Then the restaurant I worked at got knocked down by bulldozers. While I was looking for work, I wrote Dust and Shadow, which is a Sherlock Holmes pastiche pitting the detective against Jack the Ripper with a great many true crime elements, which came out in 2009 from Simon & Schuster. If I’m one thing, I’m a storyteller – acting and writing are very different disciplines, but it’s all in pursuit of drama.

Your second novel, The Gods of Gotham is published by Headline this year. How would you introduce it to a new reader?

The Gods of Gotham is day one, cop one of the NYPD. It’s the story of the cataclysm caused by the formation of the new police force, a devastating fire in downtown Manhattan, and the beginning of the Irish Potato Famine and the massive immigration influx it caused, all in the summer of 1845. It’s also the story of how Timothy Wilde lost everything and started over. 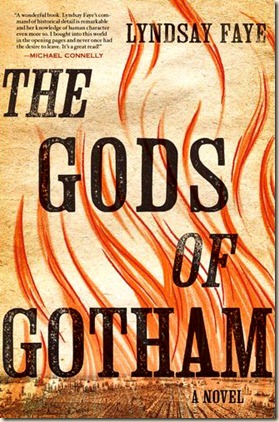 The inspiration for the story came from the fact that the history itself, as I was researching it, was highly dramatic material. I wanted to write about the very first cops on the beat because origin stories are very resonant for me. I can’t really claim to draw inspiration from any specific place... a great many things inspire me. People and their courage and eccentricities. Music, poetry. I’m an omnivore.

Writing as a professional was a major transition for me due to the fact that acting is about as social an enterprise as you could imagine, while writing is grotesquely solitary. I’m extremely lucky to be doing what I’m doing, but the lack of interaction with other humans is still something of a hurdle. I guess the characters talking in my head while I’m writing a manuscript take the place of bantering with co-workers by the water cooler.

I spend six months researching before I embark on a manuscript, because I hate having to stop to look things up historically speaking – I immerse myself in the world first. Then I spend four to five months banging out the manuscript in a slightly mad, driven fashion. Then I edit like a fiend. 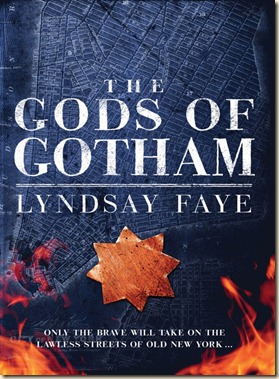 I don’t think there was ever an “Aha!” moment when I decided I wanted to become a writer because I’ve always written. Since I was a kid. Little stories, plays, songs, and later college essays about T.S. Eliot and Toni Morrison when I was a lit major. I’ve been a voracious reader since I learned to read, and that’s what drove me to write my first novel: not at all the desire to “be an author” – that seemed way, way, way out of my league – but rather, “I’d like to read a particular book and I don’t think it exists.” 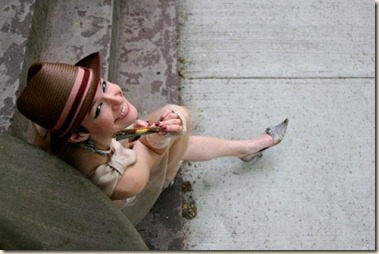 As to my work, I’m just trying to live up to authors I admire. I’m definitely in the historical thriller genre, technically speaking, but I’d prefer to say I write hero stories and leave it at that.

I’m near finished with the sequel to The Gods of Gotham, which takes place six months later and features the same roster of rogues. After that, I can honestly say I don’t know yet and am eager to figure it out.

I just finished When God Was a Rabbit by Sarah Winman. It’s unspeakably good. I don’t read non-fiction generally unless I’m researching, not because I don’t like it, but I’m always tempted away by a ripping good yarn.

I am a huge geek. No, sorry, that’s not surprising. Surprising, let’s see... I play the kazoo very feelingly.

The Gods of Gotham’s release, Feaster (some call it Easter), watching Martin Freeman in The Hobbit, this year’s Shakespeare in the Park season, trips with family and with friends. It’s going to be a good year.

Here’s the official synopsis for Gods of Gotham, which makes me think of Gangs of New York and Edward Rutherford’s New York all at the same time:

Timothy Wilde tends bar near the Exchange, saving every dollar and shilling in hopes of winning the girl of his dreams. But when his dreams literally incinerate in a fire devastating downtown Manhattan, he finds himself disfigured, unemployed, and homeless. His older brother obtains Timothy a job in the newly minted NYPD, but he is highly skeptical of this untested “police force”. And he is less than thrilled that his new beat is the notoriously down-and-out Sixth Ward – at the border of Five Points, the world’s most notorious slum.

One night while returning from his rounds, heartsick and defeated, Timothy runs into a little slip of a girl — a girl not more than ten years old — dashing through the dark in her nightshift… covered head to toe in blood.

Timothy knows he should take the girl to the House of Refuge, yet he can’t bring himself to abandon her. Instead, he takes her home, where she spins wild stories, claiming that dozens of bodies are buried in the forest north of 23rd Street. Timothy isn’t sure whether to believe her or not, but, as the truth unfolds, the reluctant copper star finds himself engaged in a battle for justice that nearly costs him his brother, his romantic obsession, and his own life.