While stumbling about on Amazon today, I discovered a novel that seems to be so transparently aimed at fans of another series. It was so transparent, that I thought I’d scribble down some comments and share them on here.

The novel in question is Madeleine Roux’s Allison Hewitt is Trapped, which seems to bear a strong resemblance to Mira Grant’s Newsflesh novels – in theme and elements of the premise, if not in content. Just take the style of the cover artwork, as an opening example… 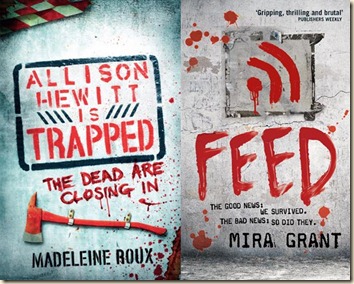 One thing I should stress from the get-go, is that this is not a statement on the relative qualities of the novels I’m writing about – I’ve read none of them, so I am in no position to discuss whether or not they’re any good. I have heard very good things about Mira Grant’s novels, though I hadn’t heard of Madeleine Roux’s novels until today. This is also not a statement that should be taken to suggest that one author has ripped off another’s idea (I have no proof of this and would very much like to not be sued). It’s more a statement of… well, marketing laziness, perhaps? 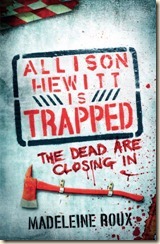 A quick look at the novels’ synopses will show you some of what I mean. First off, here’s the synopsis for Allison Hewitt is Trapped:

Allison Hewitt is trapped. In the storeroom of Brookes & Peabody’s. In a world swarming with the Undead, the Doomed, the Infected.

Locked away with an oddball collection of colleagues and under siege, Allison takes advantage of a surviving internet connection and blogs. She writes, as the food runs out and panic sets in, as relationships develop and friends die, and as zombies claw at the door, all in the hope of connecting with other survivors out there. But as she reads the replies to her posts, Allison begins to comprehend the horrifying scale of the damage. And when no one comes to the group's rescue, they are forced to leave the safety of their room and risk a journey across the city; streets that crawl with zombies, and worse – fellow humans competing for survival.

And for Mira Grant’s novels, Feed: 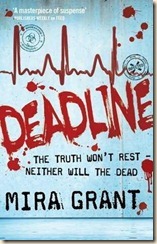 Shaun Mason is a man without a mission. Not even running the news organisation he built with his sister has the same urgency as it used to. Playing with dead things just doesn’t seem as fun when you've lost as much as he has. But when a researcher from the Centre for Disease Control fakes her own death and appears on his doorstep with a ravenous pack of zombies in tow, Shaun’s relieved to find a new purpose in life. Because this researcher comes bearing news: the monster who attacked them may be destroyed, but the conspiracy is far from dead. Now, Shaun hits the road to find what truth can be found at the end of a shotgun.

And finally, Blackout (published in June 2012)… well, actually, that has a massive spoiler in it, so I’m not going to include that in the post. (Damn you Amazon and your spoilers!!)

Could the fact that the two of these series focus on bloggers/journalists plying their trade during zombie outbreaks suggest that we’re seeing the birth of a new, mini-sub-genre? Perhaps.

Needless to say, because the Newsflesh series sounds pretty interesting, and because a lot of people I know have tried it and enjoyed it, I’ve gone and bought the first book, which I will read and review when I get a free minute…

What do you think about this?

Posted by Civilian Reader at 1:48 AM