A couple of months ago, Boom Studios leaked a pair of teaser-images for an upcoming dystopian super-hero series. The images (below) were pretty enticing, as they gave the impression of the new series being pretty bleak: 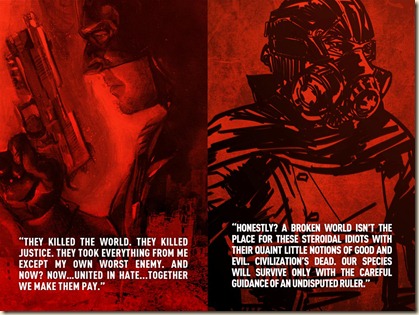 Then I discovered it was being written by Simon Spurrier, and I was absolutely sold. I’ve read some of Spurrier’s fiction (for Black Library) and also loved his Marvel mini-series, X-Club, which I thought was delightfully twisted and amusing (see the “Comics” page for links to the issue reviews). Since then, the covers for the first two issues of the series have been released into the interwebs. 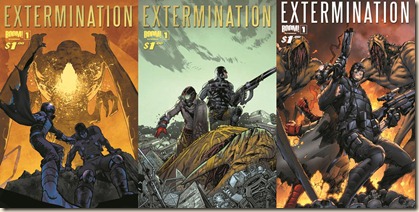 It’s been difficult to glean any more information about this upcoming series, but Comic Book Resources got the scoop: Extermination takes place in “a world in which an alien incursion has already decimated the Earth’s population, including its super-powered community.” The story follows two former nemeses, Nox and the Red Reaper,

“who must strike an uneasy truce in an attempt to drive out the invading force and begin to rebuild society – of course, their motives for doing so could not be more dissimilar.” 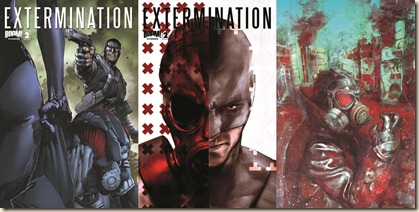 The story begins after the apocalypse is over and done with, Spurrier told CBR.

“It wasn’t even an ‘invasion’ in the conventional sense – no overwhelming attack by big wibbly UFOs or unimaginative hivemind gribblies – but a brutal corruption of the planet itself, wiping out millennia of history in one fell swoop and leaving the aggressors to merely mop-up what dregs of resistance remained. At the story's start find we ourselves on a broken Earth – a cinder, an apocalyptic waste of tortured terrains, deadly meteorology, fractured cities and horrific sights. The vast majority of the populace died in the upheavals – continental earthquakes, mega-tsunamis, solar storms and toxic rains – and certainly all traces of government, culture and military have been systematically decimated since then.”

Spurrier continued, saying that “part of the beauty of this story lies in juxtaposing this hideous new status quo with the big, simple boldness of ‘regular’ superhero activity – punchin’, flyin’, spoutin’ one-liners”. The series will use “a lot of cleverly-deployed flashbacks” to explore the period of the invasion itself: “How it started, who died, who survived (and how), and above all why the invasion occurred at all.”

I can’t wait for this series to start (the series starts in June)! There’s a lot more to the piece on CBR, so head on over to get the full scoop on the upcoming Extermination.

Posted by Civilian Reader at 12:00 AM