An Interview with DAVID TALLERMAN 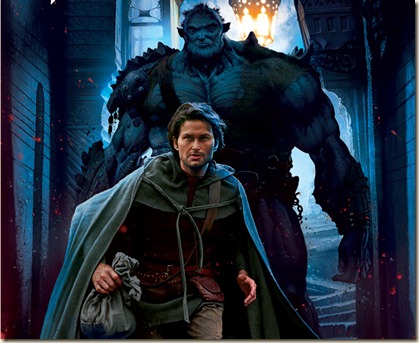 David Tallerman’s debut novel, The Giant Thief, was one of the most anticipated fantasy releases for the first half of this year. I decided to send him some questions to find out more about his work, inspirations and other thoughts on writing and fiction.

As a debut novelist, I thought I’d start off this interview with something easy: Who is David Tallerman?

I’m not sure that’s so easy! I’m a British writer, and over the last few years I’ve made a habit of trying to keep far too many balls in the air at once. I’ve written film and comic scripts, short fiction, novels and poetry, and published Fantasy, Science-Fiction, Horror and Crime fiction, in various combinations.

I currently work at one end of the country and live at the other, so I spend a lot of time on trains. When I’m home, whatever time I have that’s not spent writing goes into working on the house I just bought. It’s over a hundred years old, and in need of a lot of love… not to mention some wallpaper and carpets.

Your first novel, Giant Thief, is out now through Angry Robot Books. How would you introduce it to a new reader?

Giant Thief is a fun, fast-paced Fantasy adventure with a heavy dose of Crime fiction thrown in for good measure. It follows the misadventures of a down-at-heel, petty thief, Easie Damasco, who’s narrowly saved from hanging at the story’s opening only to find himself press-ganged into the army of the invading warlord Moaradrid – an army about to battle Damasco’s own countrymen.

Damasco’s response is to escape, robbing Moaradrid on the way and making off with a monosyllabic, pacifist giant called Saltlick, similarly forced into fighting for the warlord’s forces. Inevitably, Moaradrid doesn’t take too kindly to this, and it isn’t long before both Damasco and Saltlick are on the run, with Damasco – very much against his will – finding himself drawn into a desperate resistance effort. 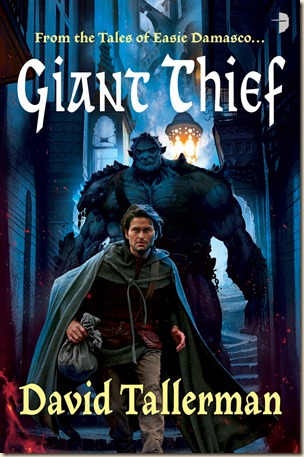 I try not to rely too much on inspiration as such; I wasted a lot of time waiting around for it but it never seemed to come, so eventually I gave up and started actively digging around for ideas instead. I learned to recognize the little blips of weirdness that were my brain throwing out something that could be the nugget of a story – and then to pin them down, think them through and see what, if anything, I could make out of them.

So far as I remember, that was where Giant Thief came from: lying half awake, just batting ideas around, seeing what stuck. I was trying to think of a mechanism that could drive a fast-paced Fantasy story, and from somewhere came this idea of a guy riding on the shoulder of a giant. Immediately, it felt like the core of something. I liked the absurdity of it, I suppose, and also the possibility for this eighties action movie, buddy comedy kind of relationship between the two. That was definitely the beginning. Why would these two very different characters be together in this bizarre situation? What are they running from? The more I probed, the more it seemed like there was room for a bigger story there.

I don’t know that there was ever a single, defining moment. Like most people who grow up to be writers, I imagine, I’ve read a lot ever since I was very young. C.S. Lewis’s Narnia books must have been one of my first encounters with Fantasy. I came to horror in my early teens, through a low quality copy of Dawn of the Dead... which made the entire movie that bit scarier because the picture was so bad that you had to really concentrate to keep up. As for sci-fi, I remember finding a tatty paperback of Frank Herbert’s The Green Brain on a family holiday and being completely fascinated by it. 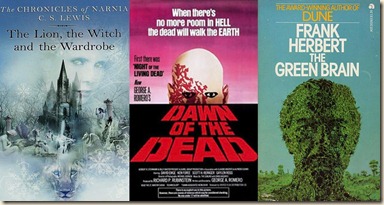 Well, I love writing, of course, I could never have stuck with it to this point if I didn’t. I love the actual process of writing, and editing too, and even the tangential tasks like blogging and keeping my website up to date – it’s all creative stuff, and it’s fun to do. It’s one of the strange ironies of getting published, though, that the more you go on, the less time you’re actually able to devote to the core of it, the bit where you’re creating new fiction. Sustained writing time starts to become something of a treat.

As for the industry side… well, the publishing world is a tough place to make a living of any sort. It’s one of those facts that you have to get to grips with very quickly once a book deal comes along, that unless you’re in the tiniest of minorities you don’t get to walk away from your day job, that in effect your hobby has become a second career, with all the demands that entails.

On the other hand, there are very many amazing people working in genre publishing, and degrees of passion and enthusiasm that you’d perhaps be hard pressed to find elsewhere. I’m starting to discover the convention scene, I did my first panel appearance at SFX a few weeks ago and my second at Eastercon just now, and both were huge fun. But mainly, these events left me in the awe of the way that anybody will, and does, talk to anybody, and how much it feels like a community. I’ve had amazing conversations with publishers, editors, professional and amateur writers, genre fans who love books and those who couldn’t care less about them. The fact that all those people can get together and talk openly is, I think, all but unique to our industry.

As for writing practices? Not so much, these days. Writing around a contracting job, weird hours and lots of travelling has taught me to write anyhow, anywhere and just about any time I can. Given the choice, I’ll be at my desk, with a glass of wine near to hand and some good music in the background… but if it comes to it, as it often does, I’ll work wherever I can set up a laptop. 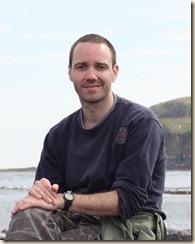 I think I always wanted to work in some kind of artistic field; I don’t remember a time when I wasn’t writing or drawing something. It seemed like a totally natural thing to do, and I’m not sure I entirely understood, even as a teenager, that those weren’t things you could just step into in the way that you can with some more conventional careers.

Then, when I went to university, I got kind of pushed off track. I’m not sure that studying literature is such a great idea for a would-be writer, because in effect it’s three years of people telling you, “Look, this is how good you’re never going to be!” It took me a long, long while to realize that that’s not how it works… that being a writer is about telling the best stories you can tell, in whatever genres and mediums you’re best suited to telling them in. And around about the same time, I came to understand that I’d never really be happy if I didn’t at least try to make a go of it.

So, yes, I think I do look back on my early experiments with a certain amount of fondness. They were mostly mistakes… but I think you have to own your mistakes and try to learn from them, and if you can, they often show you the way forward. There are even a few ideas there that I might go back to one of these days, who knows?

In terms of the work coming out, I think genre fiction is in a pretty good place. The fact that people care less and less about the boundaries within genres and between genre and non-genre fiction is producing some fascinating work. Ideas that were avant garde twenty years ago are part of the fabric of Fantasy and Science Fiction these days, and it’s great that we’ve managed to evolve like that.

Again, though, coming away from Eastercon has made me rethink a lot of my ideas… particularly when it comes to things like gender balance and cultural diversity. What struck me very forcibly, for perhaps the first time, is that every time we limit the people we allow – or even just fail to encourage – to tell stories, we make our stories that bit less interesting. Human experience is so impossibly vast, and yet we’re often so quick to restrict it in the kind of fiction that we allow out there or choose to consume.

As to where I fit into it… well, I don’t know if I do, entirely! There’s so much I want to do, in different mediums and different genres, and I hope I get to keep dabbling in all those different pools, because a big part of the fun of writing for me is that one day I’ll be writing a funny steampunk comic, the next a horror short story, the next a fantasy novel. I’ve pushed hard to have a little success in a lot of different places, and I hope I can keep getting away with that. 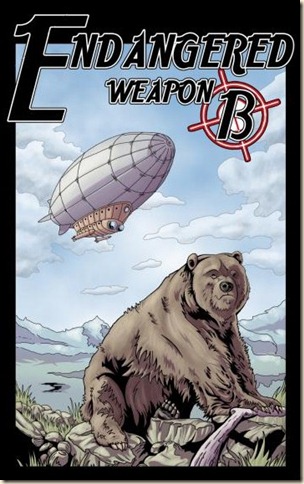 I’ve just handed in the second Damasco book, Crown Thief – due out in October – and I’m half a dozen chapters into book three, Prince Thief. There’s my on-going comic book project, Endangered Weapon B (above), that I’m developing with artist Bob Molesworth, and I’m planning a couple of shorter strips that hopefully I’ll get to put together soon. I have three years of short stories that I’d really like to start editing up and getting out there. I guess those are the main things right now.

I’ve just started the last part of Lavie Tidhar’s Bookman trilogy, The Great Game, and I’m midway through the Dark Tales of Lost Civilizations anthology I recently had a story in… and, for that matter, the Lightspeed Year One anthology that I was in, which came out over Christmas. I try to read everything I have a story in cover to cover, but time has been short these last few months. 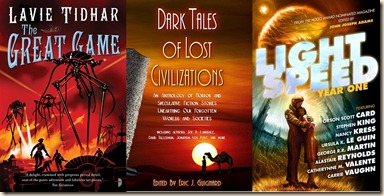 About ninety percent of Giant Thief is autobiographical. I just changed a few names to make it less obvious to friends and family.

On a personal level, I’m looking forward to doing the work on my house, and eventually, to finishing it… it’s been an interesting process so far, and if everything goes to plan, the final result is going to be a wonderful little writer’s den. Obviously, I’m looking forward to Crown Thief coming out – and in the shorter term, seeing Angelo’s finalized cover art for it. And I’m waiting for news on another long-term project that may or may not be getting to go-ahead. Of everything happening this year, that has the potential to be the most exciting… so it’s a shame I can’t talk about it yet!

Want to know more about David’s writing and upcoming projects? Check out his website and blog where you can find plenty of information about his past work and more of his thoughts on a variety of subjects.

Posted by Civilian Reader at 6:00 AM