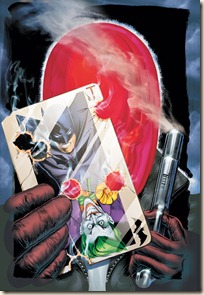 Jason Todd, the former Boy Wonder, returns to life and fights to rediscover his humanity in this exciting adventure from the six-issue miniseries. Learn what secret events led him down the path of death and destruction as he tours the DC Universe in an effort to find his way in a world that left him behind.

In the first of what I hope to be many pre-New 52 character introduction reviews, this graphic novel is a brilliant look at the evolution of a newly-resurrected Jason Todd (the second Robin) into the brutal vigilante Red Hood. I tried out Red Hood & The Outlaws (part of the New 52 range of titles) on a whim, and really loved it, so wanted to find out more about Jason Todd and how he came to be the Red Hood. This book offers a good deal of his background (it is an incomplete account, however – more on that, later), explaining his education and also motivations.

The aim of these reviews is to take a look at past stories of some of my favourite DC characters, pre-re-boot. Red Hood and Batwoman were the easiest to track down, but I’m also going to try to get some Nightwing, Catwoman, and Batgirl. And, of course, more Batman stories (Hush, Batman Reborn, and other classic storylines).

The first issue/chapter deals with the Talia al Ghul’s discovery of Jason, and her attempts to waken him from his dissociative condition. Talia ends up taking the drastic move of dumping him in the Lazarus Pit, and then rather cruelly casting him out (into a river with just a survival kit). It’s no wonder he’s a little broken, as not only was he murdered by the Joker, resurrected and then cast out by the person who resurrected him, on his first day on his own, the newspaper headline reads “Batman Returns Joker to Police Custody”. His father-figure not only hasn’t killed Jason’s murdered, but he just keeps returning him to prison – somewhere the Joker appears to have considerable ability to repeatedly escape from, causing yet more mayhem, death and destruction.

While we see Jason evolve as a killer, we also just how ingrained the teaching he received from Batman is in his mind – the powerful sense of justice, the need to do the Right Thing. The only difference is that Jason’s moral compass has been knocked off kilter, and he now exhibits some sociopathic tendencies that extinguish much of the self-control that prevents Batman from going too far. Jason is not at all averse to killing those he believes the world would be better without.

Over the course of the book, we hear of Batman’s activities, and how he handled Jason’s death – he, too, became more angry, a little less controlled, and more brutal in his take-downs. But, he also replaced Jason with a new Robin – something Jason doesn’t take too well. And when he learns of the Joker’s whereabouts... Well. Things kick off even more, let’s just stick with that.

This is the story of how Jason evolved into the cold vigilante he became, how he learned far more than Batman would teach him. It’s very nicely done, actually – we get a sense of Jason’s inner struggle, he coldness, his motivation, and his twisted nobility as well. But, we also feel sorry for him, and the tragic nature of his new life (although, it’s still a little unclear how he came back to life).

The story looks a little more at the relationship between Batman and the Joker (which also featured in the latest Batman video game, Arkham City) – how strange and somewhat co-dependent they have become, how Batman’s refusal to kill the Joker only puts more people at risk. This is, I’m discovering, a popular trope in Batman-Jokes storylines.

The creative team have also put together a visually great book – the artwork throughout is dynamic, stylish, sharp and nicely coloured.

If you have any interest in the Batman franchise, and the New 52 Red Hood & the Outlaws in particular, then this is a must-read, in my opinion. An excellent graphic novel, and an engaging look into the background of one of Batman’s some-time antagonist, some-time ally.

Red Hood’s story is continued in the Under the Red Hood collection, which I’ll review later this week. 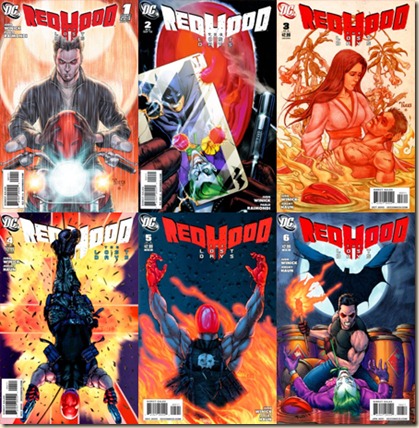