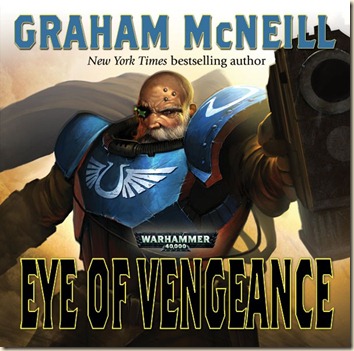 When the twisted Dark Mechanicus priests of the Bloodborn descend upon Quintarn, the Ultramarines are quick to move in defence of their prized agri-world. However, it soon becomes apparent that the planet’s fate will not be decided by the massed battle companies of the Space Marines, but by the actions of just one lowly sergeant – Torias Telion. A master marksman and Scout with a long history of service to the Chapter, Telion must now face the worst of the Bloodborn’s technological terrors and secure the city of Idrisia from the enemy advance, if the Ultramarines are to have any hope of prevailing against an enemy whose numbers swell with every victory.

A solid Warhammer 40,000 audio-drama, from one of Black Library’s best authors. The story focuses on an Ultramarine campaign against a group of renegade Dark Mechanicus priests. The Ultramarine campaign leadership dispatches a grizzled scout veteran and his team into enemy lines, hoping to sway the battle in their favour. I think this audio-drama delivers everything a fan of McNeill’s and also WH40k would want.

Telion is quite the Maverick – he is old and experienced enough to thumb his nose at Legion precedent and leadership, not to mention break from the teachings of the Codex Astartes. (He has something of a James Bond voice, which I thought was amusing.) Telion and his squad are sent off on a mission, after he butts heads with the rigid Chapter leadership, who don’t like his methods. The scouts confront super-heavy tanks on the way to their objective, and infiltrate the Dark Mechanicum’s forge.

The whole audio production is very nicely done, especially when they enter the foundry. We get a really good sense of the dark, oppressive atmosphere in the manufactorum, and the sound-effects actually help, rather than disrupt the picture the narration may conjure (an all-too-often failing of audio-dramas, in my opinion, is that the sound effects often don’t converge with my own imagination). I thought there was good tension and atmosphere to this part of the story.

The Ultramarine leaders are given patrician voices, but the troops are given more “common” accents. This was a strange choice, I thought, given that most of them would have similar upbringings and training. It is handy for the listener, though, as it makes it very easy to discern who is speaking.

This audio-drama is more diverse than the previous ones I’ve listened to – helped immensely by having the multiple performers and a narrator. Overall, therefore, it’s a pretty good audiobook. There’s a strangely calm and subdued air to the narration, despite the fierce combat, which I thought was actually quite suitable, given the Ultramarines’ nature.

I think I prefer the Garro audio-dramas over this, but that could be because of my preference for Horus Heresy-era stories (still one of the best decisions Black Library made). Eye of Vengeance didn’t quite grip me as much, but it remains a good WH40k story, with interesting characters. If you’re a fan of McNeill’s novels and short stories, and especially his Ultramarines series, then this is an absolute must.