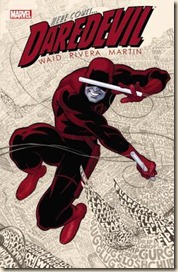 The Man With No Fear returns!

The Devil is Reborn. Renewed. Resurrected.

With new enemies, new friends... and that same old “grinnin’ in the face of hell” attitude, the Man Without Fear is back in action and leading with his face!

Having turned his world upside over the past several years, Matt Murdock realizes that justice may not be blind to his past and villains may not be the only ones looking for answers. Bring it on. If Matt Murdock could see what he was doing... he’d be terrified.

Given how much great press this series has been getting – enough that Marvel started printing one- and two-page spreads of quotes and endorsements in their other series – there was just no way I was going to ignore it. Also, it’s written by Mark Waid, so... Yeah. This was a must-read for me. And it definitely lived up to my expectations. Indeed, it exceeded them – I had, I am sad to admit, some reservations about the artwork, but that was only because I’d seen rather poor examples of it. This comic is, in almost every way, excellent.

The first chapter of the book is an interesting, drop-you-in-the-action (re-)introduction to Daredevil and Matt Murdoch – we see him in action as both, and also how much trouble his past is causing him. This chapter is double-length, and halfway through it jumps back in time from a rather momentous panel to when Murdoch and his law partner, Foggy Nelson, are still trying to re-start their practice. This second half offers a crash-course in exposition and catching-up, as Murdoch brings Nelson up to speed with regards to his new outlook on life and how his radar-senses have developed and improved. Despite the rather info-dump feel, and sudden transition, Waid manages to write it extremely well and brings the two threads (Daredevil and Matt) together very well.

The fact that everyone thinks Matt is Daredevil, despite his constant protestations to the contrary and their inability to prove it, causes endless problems for Murdock’s day job. So, after a number of false starts, he comes up with a pretty cool work-around, which allows him to empower those in need of help even more. While this is all going on, he has also attracted the attention of a new Assistant DA for New York. Although, it wasn’t entirely clear what her agenda was.

There are lots of references to other series and storylines – including the new Captain America (I think), past Daredevil stories, and so forth – but I nevertheless felt at home and never lost. It helps that Waid’s writing is so engaging and fun. There’s a great, almost cheeky sense of humour running through the story, which was employed and deployed expertly, and never ruined the tone of any scene. 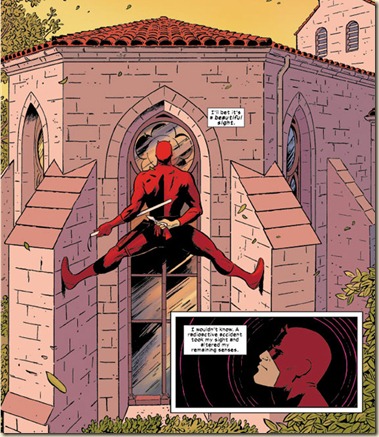 The artwork is very distinctive, as well as dynamic – a must for any Daredevil comic. Waid & Co. put Daredevil through a number of death-defying moments, and add a real swashbuckling feel to his acrobatics and antics. In addition, and equally important to any Daredevil story, is Matt’s “radar sense”, which is rendered pretty amazingly, too (below).

As the story goes on, Daredevil finds himself ever-more drawn into a conspiracy of international super-terrorists – maybe the only thing I didn’t like about the comic was the cartoon-y, ridiculous outfits of some of the bad-guys. That being said, I thought The Spot was pretty creepy (and therefore awesome as a bad-guy). The stories are loosely tied together by the premise of Matt’s re-entry into life and work in New York. For the most part, it really works.

This is a really good series. It’s not as dark as I had been expecting (I’d done some research on the character and he’s been through some pretty dark times – which are alluded to in this book), but it works very well in the tone Waid’s chosen, and I thoroughly enjoyed it. I’m really looking forward to volume two (out in June 2012).

Posted by Civilian Reader at 11:11 PM