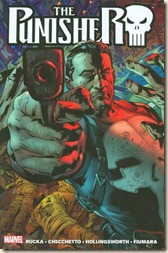 For Frank Castle death comes easy... life is where things get complicated.

As New York City’s body counts continue to rise, the city’s streets are teeming with more methodical criminals than ever and a police force doing its best to keep its head above water. The Punisher has returned to serve his own brand of justice with everything he’s got... but can he survive the darkness stored in his own arsenal?

Plus bonus pages exploring some of the new personalities in Frank’s life ... and how closely intertwined living is with dying.

I really enjoyed Rucka’s work on Batwoman: Elegy, so when I saw that he was writing this run on The Punisher, I decided to check it out. This was the first time I’ve ever read any of the series, but I was familiar with the character from the occasional guest appearance in other series as well as the first movie. I must say, it far exceeded my already high expectations – this is an engaging, nuanced story, brought to life with beautiful, atmospheric artwork.

The book opens with a massacre at a wedding party of a former US Army Colonel, when two opposing, heavily armed gangs crash the reception. Their presence appears to be an accident, which only 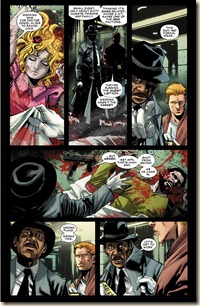 makes the situation that much more tragic. As the NYPD struggle to find a reason for the violence and pin down the killers, The Punisher gets involved in a case. The Punisher racks up a massive body count, hunting down members of “The Exchange”, this criminal outfit, but as he works his way up the organisational ladder, more powerful criminals get nervous, and they order his death.

Alongside the Punisher’s storyline, there is a focus on the two cops on the case, who are both frustrated by and also secretly glad of the Punisher’s involvement – perhaps even jealous of his lack of law-constrained options. The cops’ measured approach and by-the-book investigation offers a good balance and juxtaposition to the Punisher’s brutal tactics. There’s also a journalist who is trying to get ahead on her skills as a writer rather than on her looks. As she digs deeper into the case, she gets closer to the former bride (who barely survives the attack), and also stumbles onto some important, newsworthy information about the Punisher.

The story moves along at a fantastic clip, and Rucka’s writing is superb throughout. It’s pretty brutal, as you would expect from this title, and we’re often posed with the question, “How far is too far?” with regards to Punisher’s methods. 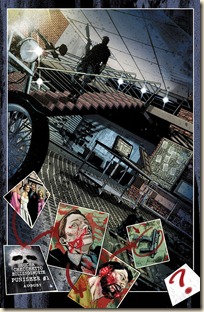 What is particularly noteworthy about this series, though, is how integral the artwork is to the story. For example, for a lot of the first chapter, there is no dialogue or narration – the artwork conveys everything expertly and perfectly. Rucka clearly trusts his artistic team utterly – and for good reason, as the artwork speaks volumes all on its own: It’s powerful, visceral, intimate and bloody. The only sound-effect that is ‘written’ is a single click of a pistol hammer being pulled back. Excellent. It adds a visual power to the imagery and story that I’ve not read or seen anywhere else. The Punisher doesn’t actually say a word until the last page of chapter three (“You...”), and yet we always know what he’s thinking. His cold detachment is as palpable as his motivation.

This is a brilliant start to the series. I’ll definitely be sticking around for more. Volume 2 is published at the end of September 2012. 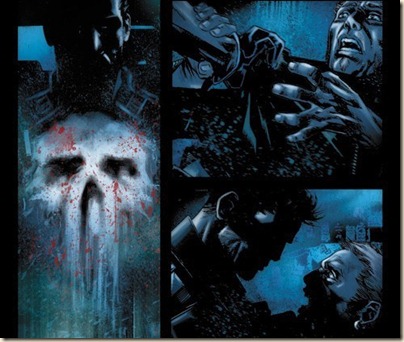 Posted by Civilian Reader at 6:41 PM