Ah, finally! I heard about Jay Kristoff’s Stormdancer what feels like AGES ago (but was probably only last year), so when the cover was revealed, it all started to feel rather more imminent. The first in Kristoff’s The Lotus War series, here is the artwork: 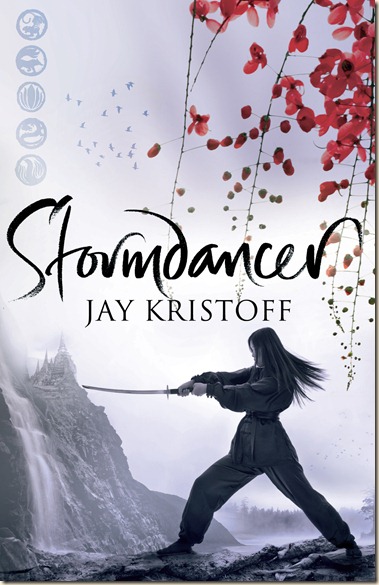 Published in September 2012, the novel has been described as “a dystopian steampunk fantasy with a flavour of feudal Japan”, here’s the synopsis from Amazon UK:

Griffins are supposed to be extinct. So when Yukiko and her warrior father are sent to capture one for the Shōgun, they fear that their lives are over. Everyone knows what happens to those who fail him. But the mission proves less impossible and more deadly than anyone expects.

Soon Yukiko finds herself stranded: a young woman alone in her country’s last wilderness, with only a furious, crippled griffin for company. Although she can hear his thoughts, and saved his life, all she knows for certain is he’d rather see her dead than help her. Yet trapped together in the forest, Yukiko and Buruu form a surprising and powerful bond.

Meanwhile, the country verges on collapse. A toxic fuel is choking the land, the machine-powered Lotus Guild is publicly burning those they deem Impure, and the Shōgun cares for nothing but his own dominion. Authority has always made Yukiko uneasy, but her world changes when she meets Kin, a young man with secrets, and the rebel Kagé cabal. She learns the horrifying extent of the Shōgun’s crimes, both against her country and her family. Returning to the city, Yukiko and Buruu are determined to make the Shōgun pay – but what can one girl and a flightless griffin do against the might of an empire?

Expect more coverage of this novel on the blog, and I will (of course) attempt to interview Kristoff at some point in the near future.

[I found the artwork on The Story Siren, who is running an interview with Kristoff & a signed-copy-giveaway.]