This issue is coming out on Wednesday (May 2nd), but I thought it was particularly noteworthy. As long-time readers will know, I’m not the greatest fan of Morrison’s work – I think he mostly has great ideas that are then poorly executed. I’m really hoping this isn’t one of them. First off, the artwork, followed by the synopsis: 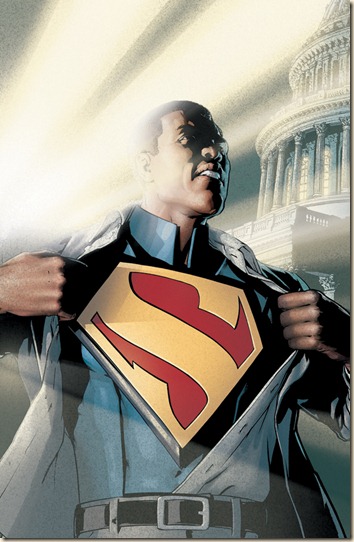 Guest artist GENE HA joins GRANT MORRISON for this tale of not one, not two, but THREE Earths!

And in the backup story, President Superman must stop a nuclear attack – but he can't leave the White House!

Yes, the most interesting thing about this issue is the idea of President Superman (who appears to be influenced by President Obama, too). Despite my general lack of interest in multiple-realities, and the fact that the synopsis is written in language that is rather off-putting, I’m actually really interested to see what Morrison and Co. come up with.

Posted by Civilian Reader at 8:46 PM