The Return of HE-MAN…?

In July, DC Comics is bringing back He-Man & the Masters of the Universe. The series will be written by James Robinson, with pencils by Phillip Tan and inks from Ruy Jose. Here’s the artwork for issue one of the six-part mini-series: 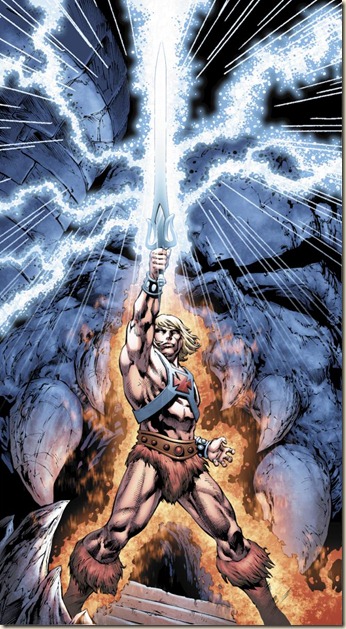 According to the DC website, Robinson reintroduces a new He-Man & the Masters of the Universe… uh, universe: Skeletor has won a major victory, and he now rules the world of Eternia from Castle Grayskull. He-Man and the other good guys (“the Masters”) have no memory of their former glory:

“Adam is a simple woodsman haunted by dreams of a heroic warrior, wielding a powerful sword in battle. He is found by a mysterious sorceress who tells him his dreams are of the way the world should be, that he is Eternia’s champion He-Man. Adam sets off on a quest to regain his power and reawaken the Masters of the Universe.”

I loved He-Man when I was a little kid. That being said, I don’t remember a lot of the story, characters or really much of anything about the story of the series. I’m not sure what I’ll make of this series, but I must admit that I’m a little intrigued.

Posted by Civilian Reader at 3:34 AM