“The Gods of Gotham” by Lyndsay Faye (Headline) 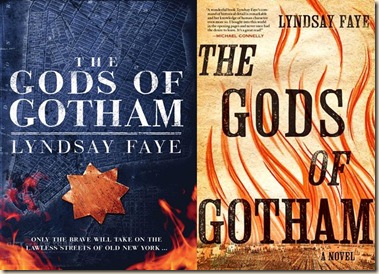 August 1845 in New York; enter the dark, unforgiving city underworld of the legendary Five Points... After a fire decimates a swathe of lower Manhattan, and following years of passionate political dispute, New York City at long last forms an official Police Department. That same summer, the great potato famine hits Ireland. These events will change the city of New York for ever.

Timothy Wilde hadn’t wanted to be a copper star. On the night of August 21st, on his way home from the Tombs defeated and disgusted, he is plotting his resignation, when a young girl who has escaped from a nearby brothel, crashes into him; she wears only a nightdress and is covered from head to toe in blood. Searching out the truth in the child’s wild stories, Timothy soon finds himself on the trail of a brutal killer, seemingly hell bent on fanning the flames of anti-Irish immigrant sentiment and threatening chaos in a city already in the midst of social upheaval. But his fight for justice could cost him the woman he loves, his brother and ultimately his life...

The Gods of Gotham is a great novel. Mixing history, thriller and social commentary, it brilliantly portrays mid-19th Century New York society, both high and low. Social and political troubles form the backdrop (as well as obstacles) for an investigation into a string of child deaths in the city. I thoroughly enjoyed this novel.

Tim Wilde, the main focus of the novel, experiences tremendous loss due to a fire that decimates his neighbourhood. Destitute, homeless, and unemployed, he reluctantly accepts his brother Valentine’s help in setting him up as a member of the newly-created New York Police Force. Like many New Yorkers, he’s unimpressed by the notion of a police force, seeing it purely as another tool to be wielded by the political party in power – New York at this time was a haven (even the gold standard) of political patronage: “Elections decide which horde of rats gets to gnaw at the bones.”

His encounter with the blood-soaked child sets into motion a much wider investigation, as Tim attempts to sift through the girl’s lies and evasions. The investigation will take him to churches, cheap tenements, and some of the most exclusive brothels in Manhattan. He knows of this world already, but with the creation of the police force the former ties between dens of iniquity and political operators is considered less acceptable. Tim finds himself at odds with politicians, madams and even his fellow New Yorkers, as his investigation inadvertently stirs up trouble and suspicion.

The formation of the New York Police Force, the “Copper Stars”, is a contentious one: some denizens of the city barely tolerate them, some are surprised to discover they exist, and some openly revile them as a “standing army” in the city (shades of today’s knee-jerk cries of “TYRANNY!” abound in this novel...).

“Never have I seen a deadlier-looking collection of firemen, street brawlers, Party thugs, and fighting entrepreneurs in my life… If you were loyal to the Party or maybe even a good watchman, you could wear a copper star. If you looked like you’ve killed a man with your bare hands and aren’t shy about doing it again, you could be a captain.”

Valentine is something of a libertine: he is personally willing to imbibe anything and is rather free with his affections. However, there are times when he also exhibits a stern belief in what is right (by the standards of the time), and in the case of the dead children and selling of children, he is steadfastly (deviously) dedicated to his job as a copper. Tim finds him fascinating and repugnant all at the same time. Tim is quiet, and devoted to one woman, who gives all impression of not being aware of his deeper feelings. When he takes on the role of policeman, he finds himself slowly drawn into the job, accepting his position completely, and wholeheartedly pursuing the ideals of what a police force should be. It helps that he’s not interested in politics, and has no desire to conduct his job to suit the political desires of his brother and the Democratic Party.

Tim and Valentine both find themselves in positions that force them to ask the question, “Does blood run deeper than politics?” Tim believes so, but for Valentine it seems to be a harder question.

It took me a little while to get used to the prose’s patter and flow, but after I did, I fell into its rhythm and was swept along. Faye weaves in the “flash” language very nicely (it’s a derivation of English Thieves’ Cant): each new term is expertly placed so the reader should never be lost as to its meaning, but for the more obscure terms, characters will offer translations – either in their thoughts or specifically for non-flash-speakers in attendance. Also, it was surprising how many I knew already – often because my father still uses them. Which suggests I may need to have a word with him...

The novel doesn’t have the relentless pacing of some thrillers, but it certainly doesn’t suffer for it – in fact, I found it benefited from the less-than-breakneck pacing.

The Gods of Gotham brilliantly evokes the New York of this era – everything from the politics to the social mores are very keenly observed, well-researched and interwoven into an engaging story. We get a great, detailed sense of the political battles being fought, the religious and social struggles and bigotry, the harsh living standards of the poor, Irish and unfortunate. The Irish, in particular, exist in abject poverty, shunned by New Yorkers, described as “heathens” and “rats that look like humans”. They were the recipients of a perversely twisted, religious-based hatred that could make otherwise sensible, rational and even Godly people consider them with extreme malice and contempt. (Faye includes epigraphs with each chapter, quoting a document or newspaper article that shares some preposterous urban legends about the encroachment of Papist beliefs and the like.) The lack of understanding, the lack of interest in understanding was a powerful, persistent problem in mid-19th-Century New York (and America as a whole).

One of Faye’s greatest talents is weaving all of this history and factual information into the narrative without upsetting the flow of the story – I never came across a passage that I thought was clunky, and she certainly knows how to show and not tell. Faye has also peopled her novel with a varied, colourful cast – each character feels real and engaging, and each is placed expertly into the story. While the investigation at times felt secondary to the portrayal of New York in this age, Faye kept me guessing right until the end, throwing out a handful of well-timed red herrings. I thought the solution was very well done, too.

In this novel, politics, religion and poverty are stirred together around a serial killer investigation with great skill and flare. Faye’s a fantastic, talented author; one with a fluid, distinctive writing style and great attention to historical detail. I look forward to reading more of her work. Highly recommended.

As an aside, if you’d like to learn more about New York in this age, check out Richard Zacks’s Island of Vice (Doubleday, 2012), which looks at the various sin-industries of late-19th Century New York and Theodore Roosevelt’s futile, ultimately doomed attempts to clean up the city.