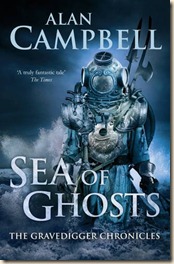 Thrown out of the Graveyard corps by a corrupt and weak emperor, Granger has to turn to running his own prison. It’s not a lucrative business but if he keeps his head down, doesn't succumb to pity or morals then he may just survive.

But when two unexpected prisoners enter his life then his world is turned upside down. Ianthe is young, blind and deaf – she can only see or hear through other people’s senses. This makes her unique in a world held to ransom by the powerful Haurstaf – a sisterhood of telepaths who consider the young girl a threat to their power. She’s also Granger's daughter...

Just a quick news post, which is also an opportunity to mention this fantastic novel again. I reviewed Sea of Ghosts last March, and I thought it was superb – an opinion I stand by today. At the time, and in my enthusiasm, I said it was “easily one of the best [novels] I’ve read in years” and “almost indescribably good”. That’s certainly more enthusiastic language than I normally use in my reviews, so I hope that gives you some indication as to just how much I enjoyed the novel.

So, with the paperback now available (in the UK and for UK Kindle, at least…), if you will indulge me for a moment, here are some more snippets from the review:

“The Sea of Ghosts is a novel of honour, revenge, loyalty and perseverance, set in a world ravaged by unfathomable science and magic.”

The plot is tight and quickly paced… the world-building is expertly interwoven into the plot… a world so full of weird, wonderful, and sometimes horrifying invention, it’s captivating.”

“Campbell’s prose is sublime, possessing that indescribable quality that sucks you in, envelopes your imagination and pulls you happily along for the ride; insistently readable and compelling. The novel kept me up until 4am on three occasions, as ‘one more chapter’ turned into three or four.”

“Campbell’s knack for atmospherics is almost peerless, and his innate storytelling ability is awe-inspiring.”

I said it then, and I’ll say it again today: Sea of Ghosts is absolutely superb and I think Campbell is an author every fantasy fan must read, and I’d highly recommend his work to everyone. I really can’t wait for the next novel in the series. I also can’t understand why on Earth I haven’t finished his Deepgate Codex series. I’ve read the prequel short story, Lye Street, but not the rest of the series: Scar Night, Iron Angel, and God of Clocks (the latter two novels were reviewed by Emma). 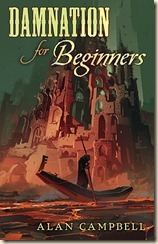 Learn more about Campbell’s novels at his website and his blog. Alan’s latest available work is Damnation for Beginners, a special edition novella published by Subterranean Press. Like Lye Street before it, this story is set in the world of Campbell’s Deepgate Codex, further expanding on that series and world. Here’s the synopsis:

“The story begins in the beleaguered city of Cog. The protagonist, Jack Aviso, is himself a cog, a functionary in the soulless, profit-obsessed enterprise known as the Henry Sill Banking Corporation. When a routinely corrupt business transaction shatters both his marriage and his well-ordered life, Jack finds himself — quite literally — in Hell, where he embarks on a perilous, unprecedented journey of revenge.”

Posted by Civilian Reader at 5:40 AM