So, last week I was in Toronto for Alyssa’s Spring Break. It was my first time in Canada, and I must say I really liked Toronto. It was very easy to see why film companies love to film there – it really can double for Anywhere, North America really easily. It was also because of this fact, I think, that I felt comfortable and relaxed there – it was oddly familiar. Not only that, but the atmosphere and temperament of the Canadians seems to be much closer to my own. All except the passport control official, who was surprisingly aggressive with his questions [my trip was bookended by aggressive, suspicious border agents, sadly].

Anyway, let’s bring things back to what this post is really about: 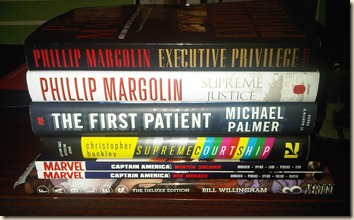 The one thing Toronto has in abundance is bookstores, and I visited a lot of them over the course of a week. As you can see from the photo above, I acquired a modest pile of new reading material, all of which was in some way discounted. The Fables Deluxe edition was a present from Alyssa. Christopher Buckley’s Supreme Courtship is a pristine, like-new hardcover, which cost me… $1, and was bought on the way to Manic Coffee (), where we went for breakfast on the first day of the trip.

The stretch of Bloor Street near where we were staying had three very good stores (Book City, Seekers, and the awesome BMV Books). Additionally, there is the World’s Biggest Bookstore (which has an overwhelming selection of books), the Canadian Indigo Books chain (very like Barnes & Noble, but the staff are much better informed in my experience), and sci-fi and fantasy book store Bakka-Phoenix. There are plenty of others, but these are just the ones I dragged Alyssa into over the course of the week. 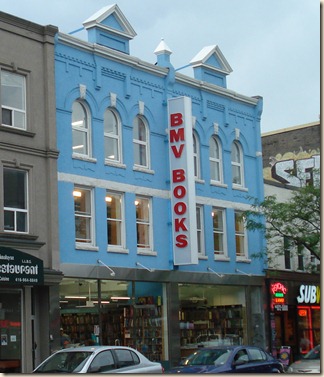 This store is fantastic – it’s huge (three floors), and everything in the store is discounted quite heavily. This is partly because the books are remaindered, but there are some that are second-hand and also plenty of new books as well. The science fiction, fantasy and graphic novel sections (the whole top floor) is particularly awesome. There are as many books as in many high-street SFF section (more than UK stores, though). Strangely, like all of the discount book stores in Toronto, the graphic novel selection leans heavily towards Marvel books – which was fine, as I’m trying to expand the range of Marvel titles I read anyway; but also slightly frustrating, as I was mainly interested in catching up with some DC and Vertigo titles.

Of the books in the photo, Margolin’s Executive Privilege ($6) and the two Captain America graphic novels ($10 and $11) were purchased in BMV. I could easily have spent more, but because I was on a specific mission due to my reading mood (political thrillers) when I was in Toronto, I didn’t spend too much time browsing the SFF novel section. 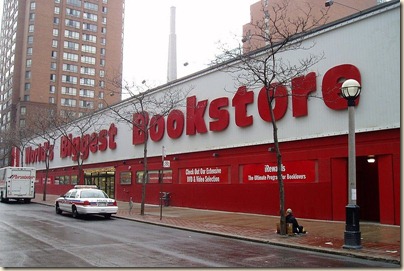 This store is incredible. Not only do they have a lot of bargain-priced books, but the sheer range of books they have in store is mind-boggling! Here’s a view of the interior, which sadly does nothing to adequately portray the scale of the place… 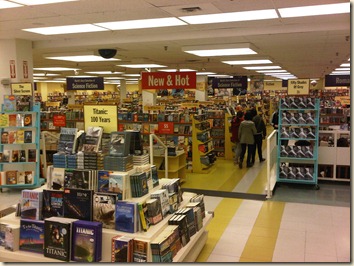 As a quick aside: Matt Forbeck’s Carpathia was on that Titanic display, but on the side facing into the store – was very pleased to see it featured there.

The SFF, Thriller/Mystery, and Graphic Novel sections were incredible and near-exhaustive. Just check out this shelf-end display from the SFF section: 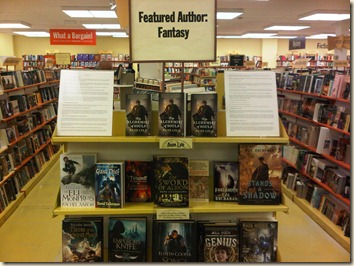 Eight of those authors have featured on this blog! So, naturally, I think the staff at WBB are awesome and have impeccable taste.

From World’s Biggest, I bought Palmer’s The First Patient and Margolin’s Supreme Justice – $6 and $5, respectively, and both pristine hardcovers.

A couple of doors from World’s Biggest, on the same street, is another BMV Books – much smaller than the one mentioned above, but it has a few extremely well-priced, remaindered Vertigo Comics Deluxe editions (Y The Last Man, Fables and Ex Machina). 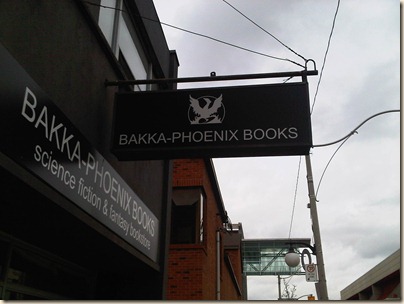 Bakka-Phoenix is a strange store. First off, they have an excellent selection of science-fiction and fantasy novels, with very good recommendations and comments throughout. The staff, however, are a little strange. Alyssa and I were the only two customers in there, and neither of the staff seemed to even notice us, and instead carried on a very strange conversation about tweens who only get into SFF because of Twilight.

And one day we had a picnic with some of Alyssa’s university friends, in very small playground huts on Toronto Island. I didn’t fit, but it was very pleasant: 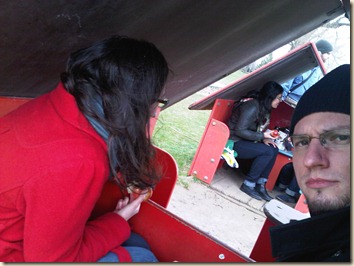 Alyssa, left, and me in the mini-huts

So, the lesson from my Toronto trip, which I choose to draw from, is that being a reading-obsessive does not have to be expensive, especially if you are not too picky about the condition of the books you are buying and reading. With this in mind, I’m going to start doing a series of posts about reading on a budget – this may be a weekly, monthly, or entirely sporadic feature on the blog. I am currently thinking of a “Reading on $20” first post, which will look at a specific week of releases (fiction, comics and also magazines), and will tinker with the format until I come up with something that works.

The other lesson I’ve learned is that Border Agents think I look suspicious, which is a little disheartening for someone who can’t seem to remain in one country for very long…

I’ll finish off this post with a photo of an amazing mural, at the Augusta Avenue-Oxford intersection: 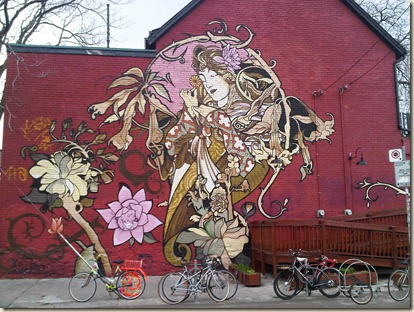