“The Alchemist of Souls” by Anne Lyle (Angry Robot) 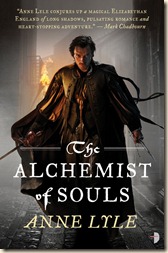 Book One of Night’s Masque

In The Alchemist of Souls, Anne Lyle has created a fascinating, richly detailed version of Elizabethan England filled with intrigue, politicking, plenty of espionage and, above all, engaging and interesting characters. With beautiful prose, Lyle has easily written one of the best debuts of the year.

Maliverny Catlyn, our main protagonist, is one of the best I’ve read in a while. He is unceremoniously invited to the Tower of London by Sir James Leland, the Lieutenant of the Tower, and receives a rather insincere apology for the “regrettable... misunderstanding” of his arrest. Mal is press-ganged into serving as bodyguard and guide for the new visiting Skrayling ambassador. Shortly after that, he’s approached by Sir Francis Walsingham, the Queen’s Secretary and Spy Master, who tasks Mal with keeping spying on the ambassador’s movements and business.

The Skraylings are a new race Lyle has introduced into her world, physically similar to elves, but more original and interesting than your average Tolkien-esque species. They come from Vinland (part of North America), and share some traits with the Native Americans. [If you’d like to read an article that introduces the Skraylings, I’d recommend Lyle’s “The Big Idea” piece.]

A strange and intriguing relationship develops between Mal and Ambassador Kiiren – one that allows us to learn more of the Skraylings’ culture and social mores, while also providing the impetus for much of Mal’s character development. There’s something from his past, something he seems to have semi-blocked from his memory, that connects him to the Skraylings. The mystery at the heart of this novel is quite tantalising, and I particularly liked the fact that Lyle only slowly provides bits of information. The issue of race and racism is quite central to the plot, as Mal comes to terms with his assignment – he has a common, human’s distaste for the “other”, which in this case is the Skraylings, that manifests as a just-beneath-the-surface racism. However, as he spends more time with the ambassador, we see the impact that exposure to another culture can have on someone initially reticent or even racist – the rationalising impact of education. Over the course of the novel, he discovers a little bit more about his connection to the Skraylings, and comes to respect and appreciate Kiiren as almost a friend.

In addition to his new job, Mal is caring for his twin brother, Sandy, who is apparently quite mad, and must live at Bedlam. When Mal first goes to see his brother, it’s heart-breaking – Lyle really made me believe the brotherly connection, and the obvious sadness that Mal felt keeping his brother locked up and living in the squalid and inhospitable conditions mental patients endured during this period of history.

The other key protagonist of the novel, Coby, is a woman disguising her sex from the acting company she works for. Through her experiences we learn a lot about the lives of players during this time – everything from the running of a troupe to the social standing and expectations of actors. Eventually, the two storylines converge. At first, I didn’t find Coby’s story as engaging as Mal’s, but as the two threads became joined more closely, I really started to enjoy the whole. I think the main issue for me was that it sometimes felt that Lyle was letting the historical details take over just a tiny bit – there were a few passages when Coby is working at her job for the company that started to feel just a touch repetitive and over-detailed, slowing down the overall plot.

The novel as a whole has a more gentle pace during the first half, which I enjoyed a great deal. By not throwing us straight into the main plot and conspiracy, Lyle gives the reader some time to get to know the characters very well. I felt like I had a pretty good handle on Mal’s multi-faceted character, for example, before his appointment as bodyguard actually began. He is a man who characterises his life, at one point, as “secrets, lies and a blade in each hand” – a perfect description of his part in the story. We get to know Coby and Ned Faulkner – some-time lover of Mal’s, but also someone who unwittingly gets caught in the conspiracy – almost as well as Mal. As events and tension builds, the pace of the novel becomes a little brisker (though no less unhurried – you’re just going to read it faster and be even less inclined to put it down), and our protagonists are really put through the wringer, confronting sabotage, the Huntsmen (Skrayling-hating killers), a near-limitless number of spies, strange magics, and a conspiracy that goes right to the heart of England’s power.

Lyle’s prose is fantastic – it is fluid and expertly crafted. Her story drew me on from the beginning, through the twists and turns of the various sub-plots and switching loyalties and revelations. In The Alchemist of Souls, Lyle gives us a wonderful impression of where politics, diplomacy and theatre collide. It’s really interesting, and she gives us a lot of nice details about the theatre practices of the time, as well as of high and low society. Lyle’s characters and their relationships are deftly handled. Each member of the cast feels  lifelike and distinctive. They and their relationships – especially way Coby’s and Mal’s – develop in interesting and unexpected ways.

The ending sets things up for a very interesting series to come, asking the question “How far would you go to stop a potential invader, to protect your culture and way of life?” Add a little magic into the mix, and you get something pretty awesome and original.

I've not read much historical fantasy (and my historical fiction reading has been pretty much limited to Bernard Cornwell’s Sharpe and Archer series), but this has convinced me the genre is worth much more attention.

Lyle is a superb talent, one I think everyone should be reading. The Alchemist of Souls is very highly recommended.