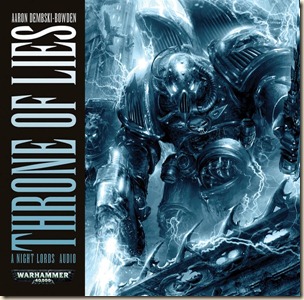 Night Lords audiobook from one of the Black Library’s most promising up-and-coming authors.

The Night Lords are among the most feared Chaos Space Marines in the universe. Betrayed, cast from the Emperor’s light and hunted as heretics, they are the rebels of the 41st Millennium. Garbed in symbols of death, the Night Lords are remorseless hunters and killers. They will never repent for the blasphemies that saw them banished. They prey upon the dying Imperium, bringing death from the darkness between the worlds. And terror is their most powerful weapon.

The warband of the Exalted, travelling aboard The Covenant of Blood, are recovering from the events at Crythe Primus. But their dark crusade against the loyal Imperial forces continues, and they will leave a trail of blood and terror behind them.

This is the second Black Library audiobook I’ve tried out. It’s a tie-in to Dembski-Bowden’s Night Lords series, which I haven’t yet read (but have heard nothing but good things – so, you really have to wonder why I haven’t read it yet… I’ll get on it). I’m never sure what to write when reviewing audiobooks – with a running time of only 72mins, it’s basically a short story on tape, so to go into too much detail would be to spoil the story.

The story centres on a Night Lords warband, which is searching for a mysterious hololith, presumably containing some secret information that is of considerable value to their Legion. From the opening sequence of a navigator’s efforts to massage a tense translation from the Warp into real space, to the final, almost sad scene, Throne of Lies clicks along at a fair pace.

There’s a lot more description going on here than there is dialogue or interaction between characters. The Night Lords crop up quite late in the story, all things considered, when they ambush a Callidus assassin during her mission to execute a local cult high priest. Talos, the leader of the warband, is seeking a specific Callidus temple, in which the hololith that has eluded him for so long supposedly resides. The quest is based on the Night Lords’ oldest grudge: it was an assassin from the Callidus temple that carried out the execution order place on their Primarch, Konrad Curze. (This is actually one of the more interesting events of the late Horus Heresy, so I wonder if the novels go into more detail… More reason to check them out.)

The audiobook is well-acted, if at times a little over-done. The writing and story come across very well, and one even feels sympathy for the Chaos Marines in that final scene. The description sometimes feels a bit too florid, but I think this is partly because of the medium and the tenor of the delivery – there are times when it feels too dramatic for what’s being described. The quality of the story has certainly piqued my interest in the Night Lords series (and Dembski-Bowden’s other writing), and I’ll endeavour to get the first instalment – Soul Hunter – read and reviewed before the second book (Blood Reaver) is released in May 2011.

I think it’d be fair to say that I don’t find audiobooks as satisfying as novels or short-stories. There’s just something far more pleasurable in reading a story than having it read to you. For me, this has everything to do with the ‘voice’ of the story – narrative, in my head, is usually pretty monotone, whereas the actors on audiobooks sometimes seem a little too eager to turn it into some oratorical event. There are just some things that will never stir peoples’ emotions, though… If there’s just one thing you don’t like about the performance, it can make the whole experience less pleasurable (the voice of the navigator’s attendants, for example, were a problem for me, as were the slight changes in accent that differentiated certain characters).

Overall, I would say that Throne of Lies contains a great short story based on the Night Lords Chaos Space Marines, one that manages to generate a surprising sympathy for such dark and brutal characters. It is certainly Dembski-Bowden’s story that carries this audiobook. If you haven’t read the author’s Night Lords series, then this will certainly make you want to read them.

If I could request one thing, however, it would be for this story to be printed in an anthology or omnibus edition of the series at a later date.

Posted by Civilian Reader at 10:42 PM