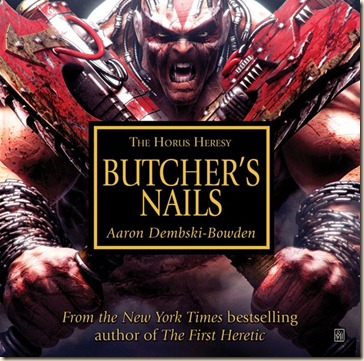 The Primarch Angron: gladiator-king and Horus’s lunatic attack dog. Never having hidden his resentment for his brothers, he now carves a bloody swathe through the galaxy in the Warmaster’s name, with the Heresy providing a convenient excuse to indulge his love of brutal warfare. When they are tasked with a secretive mission alongside the Word Bearers Legion, the World Eaters’ violent tendencies soon attract the attention of xenos raiders, troubled by the portents surrounding the primarch’s berserk fury and his ultimate destiny as ‘the Blood God’s son’...

Another great Horus Heresy story, complete with action, introspection and myth-building, this time focusing on the psychotic Primarch of the World Eaters, Angron, and his relationship with his brother Lorgar. This audio-drama is the best production of any I’ve listened to from Black Library thus-far, and I must say I was very impressed with the performances. The story and writing was, of course, top-notch as well.

When the World Eaters are ordered on a secret mission alongside Lorgar and the Word Bearers, the violent tendencies of Angron’s Legion quickly creates fractures between the two traitor Legions, and soon attract the attentions of the Eldar.

I really liked the characterisation of Angron, a Primarch I wish featured more in the Horus Heresy series as a whole. Everything from his barely repressed anger, fury, and general psychosis, to the paranoia they breed in him is nicely portrayed and not presented in an over-the-top manner.

We get a great look inside Angron’s psyche, and what the Butcher’s Nails of the title (rage-inducing cranial implants) do to his personality and thought processes. Lorgar’s frustration and disappointment with Angron’s character and attachment to his implants is palpable, and is the cause of much of the tension between the two Primarchs. The implants are the only things that bring Angron a modicum of peace – a “clarity of purpose”, he calls it, when he descends into the purity of his rage. Angron’s contempt for Lorgar’s preaching is obvious in all of their interactions.

“Perhaps they will hear you, shouting from the moral high ground.”

The actor who portrays Angron makes sounds like a gruffer, angrier Hugo Weaving as Agent Smith from The Matrix.

Kharn was another interesting character, so different from the character from the “present” Warhammer 40,000 timeline – he is not yet the slavering slayer that players of the game might know and recognise, not yet given over to worship of Khorne.

Between Lorgar and Angron, we see two traitor Primarchs discussing the potential of their deaths (Ferrus is dead, at this point), which was a nice touch, and something hitherto undiscussed in a way that would suggest it’s even possible. Up until this point, after all, they have yet to meet an opponent who could come close to besting them – with the Legions split loyalties, the potential to face off against another Primarch is now likely, which evokes a rare moment of reflection on their mortality.

We hear of cracks forming between the World Eaters and Word Bearers. Their enforced, Horus-ordered campaign struggles under the two competing Legion ideologies. Unlike the loyalist Space Marines, there’s really no way anyone except, perhaps, Horus can order Angron and his Legion around, and then only if it aligns with Angron’s own preferences, tendencies, and tastes, which “ran along bloodier lines.” During the campaign, Lorgar is distasteful of the World Eaters’ strategy of leaving a “grave world” of silenced cities, filled with the bleached bones of the dead. Lorgar can’t accept this, and eventually the two Primarchs come close to open conflict. In the wake of an alien attack, they grudgingly join forces to give chase to their assailants.

The (Dark) Eldar – “reavers” – are pursued and boarded by both Primarchs, who cut a bloody swathe through the aliens. In a final, cataclysmic battle, the Eldar leader voices the prophecy of the Blood God’s Son, and the path that will lead one of the “mon-keigh god-princes” to the Skull Throne. Lorgar doesn’t like this, but Angron’s anger and lack of self-control commits him to damnation. In this scene, Lorgar sounded almost jealous of Angron’s future fate... Given the other Primarch’s distrust of the Word Bearer’s words, however, Lorgar’s concern and warnings were unlikely to ever get through to Angron.

This is easily one of the best audio-dramas Black Library have released. The story is superb. As usual, I wish it had been presented as a text novella, but there we go. I doubt I’ll ever prefer audio-dramas over printed stories, but this certainly came very close to being as satisfying.

The story shows us how fractured the traitor Legions are, and that they were in no way a unified force. (See also the Alpha Legion and their own agenda – as outlined in Legion and Deliverance Lost).

Highly recommended for all fans of the Horus Heresy series, Aaron Dembski-Bowden, and Warhammer 40,000 in general.