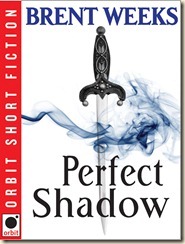 Discover the origins of Durzo Blint in this novella set in the world of Brent Weeks’ New York Times-bestselling Night Angel Trilogy.

Gaelan Starfire is a farmer, happy to be a husband and a father; a careful, quiet, simple man. He’s also an immortal, peerless in the arts of war. Over the centuries, he’s worn many faces to hide his gift, but he is a man ill-fit for obscurity, and all too often he’s become a hero, his very names passing into legend: Acaelus Thorne, Yric the Black, Hrothan Steelbender, Tal Drakkan, Rebus Nimble.But when Gaelan must take a job hunting down the world’s finest assassins for the beautiful courtesan-and-crimelord Gwinvere Kirena, what he finds may destroy everything he’s ever believed in.

Brent Weeks’s Night Angel series was one of the first fantasy series I reviewed on CR, and I loved it. To return to this world a couple years later, and learn more of the master-assassin Blint is wonderful, and Weeks shows once again just how good a writer he is.

It took me a couple of pages to get familiar with the world again, as my mind brought back the names and so forth that I remember from the original trilogy. There are a couple of familiar characters, and many of the locations are familiar for those who have read the trilogy (but still rendered very well and evocatively in this novella).

The novella opens with an ingenious and elaborate assassination at a previously-thought-impregnable fortress, conducted by Gaelan. It brought to mind the apocryphal death of King Edward II, only far more elaborate and ingenious.

Perfect Shadow is a great introduction to the world and society of Weeks’s Night Angel novels, and also to Durzo Blint, who is such a great protagonist. In this novella, as mentioned above, he is not yet using that name. It is the story of how he becomes the character in the main novels. We are taken through his training as a wetboy (a magically gifted assassin), how he came to ally with and know Gwinvere, the Mistress of Pleasures, and his part in a sudden and brutal underworld coup – including how he came to be the city’s best assassin. (He has a few tricks and abilities up his sleeves that give him an unfair advantage, but who’s really going to argue with him?)

“I got a bit of prophecy,” the old assassin said. “Not enough to be useful, you know. Just glimpses. My wife dead, things like that to keep me up late at night. I had this vision that I was going to be killed by forty men, all at once. But now that you're here, I see they’re all you. Durzo Blint.”

I came out at the end of reading this novella really wanting to re-read Weeks’s debut trilogy (it’s almost indecently good for a debut, actually). Given the considerable size of his novels (most of them clock in with hefty page-counts), Perfect Shadow shows that the author is just as gifted when he tries his hand at a finely crafted and precise tale, sacrificing none of the atmosphere, momentum or character development.

The pacing of this novella is superb, as are the writing and characterisation. Dialogue is natural and fluid, there were a couple of amusing asides, and the ending is pretty great, too.

Thoroughly entertaining and engaging, I devoured Perfect Shadow in one (rather late) sitting. It’s really great stuff. It could serve as an excellent introduction to the Night Angel Trilogy, although I do think someone who has read the trilogy might get a little more out of this than a total newcomer.

[Perfect Shadow is part of Orbit’s Short Fiction eBook program, and is available through Amazon US & UK.]

Posted by Civilian Reader at 2:50 PM