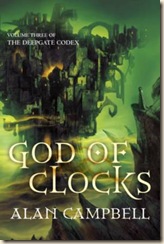 War, rebellion, betrayal… But the worst is still to come.

Scar Night introduced us to the dark and decaying world in which the city of Deepgate hangs in chains over the abyss in which dwelled the god Ulcis. Iron Angel detailed the protagonists’ difficult journey away from the ruined city, across a dangerous wilderness. God Of Clocks continues the story, as Dill and Rachel rush towards a final confrontation with King Menoa, Lord of the Maze. Rachel has rejoined the blood magician Mina Greene and her demonic dog Basilis. Carried in the jaw of a debased angel, they race to the defensive stronghold of the god of clocks, pursued by the twelve arconites – Menoa’s merciless automatons (the iron angels of the previous book). Meanwhile, John Anchor pulls Cospinol’s skyship into Hell itself to meet Menoa on his own ground. But neither Heaven nor Hell is anything they could have expected…

For this final installment to the series, Campbell’s writing has become even darker. His previous occupation as a video-game designer really comes through, as his writing is incredibly atmospheric and evocative – it’s clear that creating a complete picture for the reader is very important to him. He creates a dark and disturbing world, and as the characters journey into Hell, they find ever-more twisted and debased creatures. Campbell blurs the lines between good and evil: even relatively benevolent characters, such as Cospinol, deal in casual cruelty. This is a world in which no one can be trusted: neither gods, nor men, and certainly not any of the demons who inhabit Hell. Nothing is as it seems, keeping the characters, and the reader, guessing throughout.

The wide cast of diverse characters, well-created, does sometimes become a little unwieldy, as we try to keep track of the various story-threads. This is not, however, too much of a problem – and one that might be mitigated by reading the series in one go, rather than having to wait a year between books (something a lot of fantasy fans do, with trilogies). Another slight problem was the ending, which didn’t tie up nearly as many loose-ends as it perhaps should. Sure, not everything can be tied off, but it does make me wonder if this is actually the last in the series… (anyone?) It would also have been nice to know a little more about the Deepgate Codex, which is only alluded to a couple of times, but never in too much detail.

Rachel is a great, strong female character (she kicks ass, basically). The god Hasp is a complex yet appealing character. I liked the way the author subverts the traditional ‘bad-guy’ tropes of fantasy; for example, both Mina Greene and Alice Harper are morally dubious, but even they turn out to be psychologically rounded characters – it’s clear why they do what they do, playing the hand they’ve been dealt.

Comparisons with Mervyn Peake (author of Gormenghast) are certainly justified, but Campbell brings a contemporary twist to a Peake-style gothic world – it’s certainly something new, strange and compelling.

Overall, an excellent series, but I would love to know if this is, in fact, going to be the last volume. I shall be watching eagerly for Campbell’s next book.

Posted by Civilian Reader at 12:06 PM