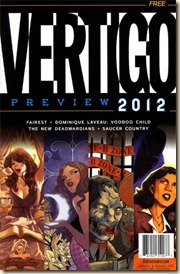 If you’ve been in a comic store this past week, you may have either seen or received a new preview sampler issue that includes tastes of four new titles coming from Vertigo next month.

All four titles sound pretty cool, so I thought I’d just share some information on the blog to help generate some interest. I’m quite familiar with two of the series’ writers already, aware of a third, and one of them is an entirely new name to me.

So, read on for some information and quick thoughts on Dominique Laveau: Voodoo Child, Fairest, New Deadwardians and Saucer Country. 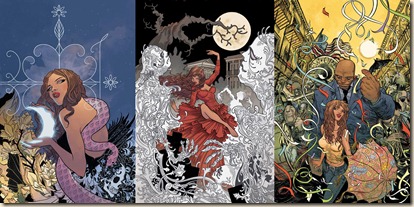 This is the story of a half-breed, outcast and heir to the Voodoo Queenship of New Orleans, if she can live long enough to claim her birthright. New Orleans is the most haunted city in America: a town of centuries-old ghosts and newly drowned spirits; where vampires, voodoo spirits and loups-garous make their home. Ruling over this all are the powerful Voodoo Queens, whose influence stretches into politics, business and crime as they maintain a delicate balance between the mortal and supernatural worlds.

But in the aftermath of Katrina, all that has changed, for someone or something has murdered the Voodoo Queen and most of her court. The number one suspect is Dominique Laveau, a grad student at Tulane who is about to discover that her entire life has been a lie. Now Dominique must forge alliances with those out to kill her while seeking to uncover the truth behind the royal murders, as she is ultimately forced to deal with a destiny she could never have imagined.

Selwyn Seyfu Hinds is the former editor-in-chief of The Source magazine, an award-winning author, journalist and TV producer, while Denys Cowan is the co-founder of Milestone Media. That’s not the most gripping introduction to the creative team, but I am entirely unfamiliar with any of their work. Nevertheless, the few pages in the sampler were very interesting (in terms of writing and artwork), and I know I definitely want to read more of the series. 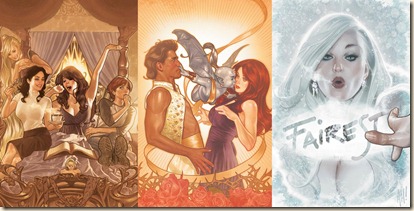 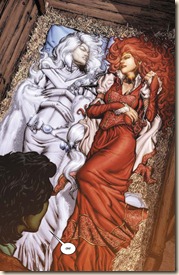 with a wraparound cover on issue #1. I’ve not read any of the Fables series, but it is very high on my wish-list; I’ve never heard anyone say or write a bad word about the series. Naturally, I’m torn between buying the cheaper TPB edition and the quite lovely deluxe hardcovers… I hope to try out at least the first volume this year. According to Shelly Bond, most of the stories in Fairest predate the Fables timeline.

Moving on. This series is doubly – nay, triply – intriguing due to the two other creative teams that will be working on future arcs. The first pair are 2011 Arthur C. Clarke winner Lauren Beukes (Moxyland, Zoo City) and artist Inaki Miranda. The second pair are iZOMBIE and Memorial scribe Chris Roberson and artist Shawn McManus.

The artwork for the first issue (sample above) is amazing, and some of the nicest I’ve ever seen inside an issue. It’s all cover-worthy, so I’m particularly looking forward to having entire issues of it. An intriguing taste, I’m definitely looking forward to this series. 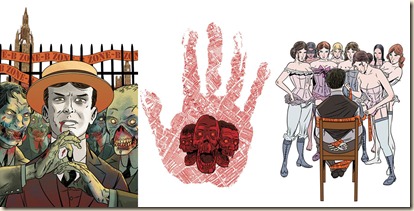 Trust us. This is different.

In post-Victorian England, nearly everyone of the upper classes has voluntarily become a vampire to escape the lower classes who are all zombies.

Into this simmering cauldron is thrust Chief Inspector George Suttle, a lonely detective who's got the slowest beat in London: investigating murders in a world where everyone is already dead!

But when the body of a young aristocrat washes up on the banks of the Thames, Suttle's quest for the truth will take him from the darkest sewers to the gleaming halls of power, and reveal the rotten heart at the center of this strange world.

The New Deadwardian is the latest comics project from CR-favourite Dan Abnett, who has been involved in a staggering number of excellent projects – in comics he is currently writing, with Andy Lanning, Resurrection Man, Villains for Hire and New Mutants; at the same time he writes the Gaunt’s Ghosts series and occasional novels in the Horus Heresy series for Black Library. Art is provided by newcomer I.N.J. Culbard (At The Mountains of Madness). I’m very much looking forward to this mini-series (there will only be eight issues).

The sample doesn’t give us too much, but it did leave me wanting to know what happens next – which, ultimately, was the point. Culbard’s artwork is interesting, very distinctive, and more cartoon-y. I’m not entirely sure what I think of it, so I guess I’ll have to wait until I’ve read an entire issue. 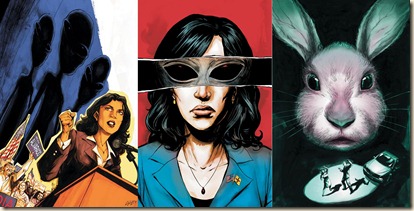 Arcadia Alvarado, the leading Democratic candidate for President of the United States, says she was “abducted by aliens.”

As the Mexican-American Governor of New Mexico, she’s dealing with immigration, budget cuts and an alcoholic ex. She’s about to toss her hat into the ring as a candidate for President in the most volatile political climate ever.

But then… a lonely road and a nightmarish encounter have left her with terrible, half-glimpsed memories. And now she has to become President. To expose the truth – and maybe, to save the world.

With the help of her quirky staff, Arcadia will pursue the truth of her abduction into danger, mystery and awe.

Arcadia’s quest is at the heart of this new monthly series from one of my new favourite comics writers, Paul Cornell (Demon Knights, Stormwatch, Action Comics, Doctor Who) and artist Ryan Kelly (New York Five, Northlanders). The series has been described as a “dark thriller that blends UFO lore and alien abduction with political intrigue, all set in the hauntingly beautiful Southwest.” That sounds pretty cool, to me. Definitely excited to read this.

Saucer Country has a great premise, and the few pages included in this sampler are very nicely drawn and coloured. Kelly’s style is great, and complements Cornell’s writing very well. Of the four new titles, this is the one I’m most looking forward to.