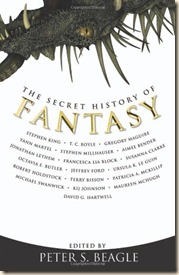 Step right up and buy your ticket to the impossible marvels of the Barnum Museum. Take a highly caffeinated ride through the Empire of Ice Cream. If you dare, hunt feral archetypes deep within a haunted English forest. Or conquer the New World with a band of geographically-challenged Norsemen.

Tired of the same old fantasy? Here are the stories that you’ve never imagined possible. Nineteen extraordinary writers offer much-needed antidotes to clichéd tales of sword and sorcery. Combining the best of the old and the new, these instant classics will inspire even the most jaded of readers. Beloved author and anthologist Peter S. Beagle reveals the secret: fantasy is back and it’s better than ever.

The Secret History of Fantasy comes with a lot of big names attached to it: notably Stephen King and Neil Gaiman, but also Gregory Maguire, Francesca Lia Block, Octavia E. Butler, Patricia A. McKillip, Jonathan Lethem, Yann Martel, and Susanna Clarke, to name but a few. Add to that Peter S. Beagle (whose The Last Unicorn I read only recently and loved) as both editor and contributor, and expectations are pretty high. As it turns out, it is every bit as good as it should be: Beagle has performed his task thoughtfully and with dedication, and the stories are original, varied, and distinctive. This collection is a very good read.

The intention of The Secret History of Fantasy is clearly stated by Beagle in his introduction: to reveal a tradition of fantasy that harks back to the genre’s pre-Tolkien roots. The range of authors he has chosen as a part of this tradition is impressive: from giants of the genre to lesser-known writers, this collection has them all – with winners of Hugos and Bookers alike. The variety of pieces included is also striking. Some retell classic stories and fairy-tales; others invent new ones. Some (T. C. Boyle, I’m looking at you) are just darkly, brilliantly weird. Others resist classification or generalization, accomplishing the anthology’s mandate to show just how many things fantasy can do. A recurring feature in these stories is the lurking presence of the uncanny, the mysterious, inexplicable elements of the world that we discover when we step off the beaten path or outside of the orbit of our daily lives. The journey into the woods (beloved by classic fairy-tales, and Bruno Bettelheim) occurs literally and metaphorically, taking characters and the reader to the edge of the known and looking at the shadows beyond that edge.

Each of the stories is worth reading, and I won’t go into detail about all of them. That being said, there were a few that really stood out for me. Maureen F. McHugh’s “Ancestor Money” is a quiet but thoughtful account of a major event in one woman’s afterlife, and has stayed in my mind since I read it. Stephen King’s “Mrs. Todd’s Shortcut” I found touching and oddly exhilarating. When I began Neil Gaiman’s “Snow, Glass, Apples,” I fully intended to go to sleep when I finished, but I was so unsettled by the story that I had to read the next one (Aimee Bender’s whimsical “Fruit and Words”) before I could turn out the light. Susanna Clarke’s “John Uskglass and the Cumbrian Charcoal Burner” was utterly delightful, and made me promise myself I’d finally read Jonathan Strange & Mr. Norrell in spite of the mammoth size of my copy and glad that I recently purchased The Ladies of Grace Adieu and Other Stories.

This collection also benefits from the inclusion of some non-fiction pieces on the fantasy genre. Ursula K. Le Guin’s essay, “The Critics, the Monsters, and the Fantasists”, examines the problematic relationships academia and literary reviewers have with fantasy (and gets bonus points for reminding me about Tolkien’s essay “On Fairy Stories,” which I’ve wanted to read since a roommate of mine in university studied it in a class). David G. Hartwell’s “The Making of the American Fantasy Genre” charts the history of the commercial evolution of what he calls “genre fantasy” as distinct from (although not necessarily at odds with) “fantastic” literature. Beagle’s own introduction positions the fantasy he has chosen to include in this book against the Tolkien-esque heroic fantasy that he sees as dominating the genre. These essays are all thoughtful and thought-provoking. I don’t agree with everything they say (indeed, I could go on at length discussing and responding to them – don’t worry, I won’t), but all three provide interesting and insightful commentary on fantasy fiction, and would be valuable reading for anyone wanting to enter into critical debate about the genre.

There is one issue raised by these essays (in particular Beagle’s introduction) that I will take up, because it relates to the way this anthology is positioned in relation to the broader fantasy genre, which I find somewhat problematic. Really, what I’m objecting to is right there in the synopsis: the idea that these stories provide “much-needed antidotes to clichéd tales of sword and sorcery,” or indeed that such antidotes are necessary. While I’m not going to insist that everything produced in the sword-and-sorcery vein is brilliant and original (that would be foolish, as it is demonstrably false), I think Beagle is too dismissive of the sub-genre (if that’s the appropriate term). He notes that the distinction between the fantastic and the literary is quite new in storytelling and publishing, but seems to redraw what he has already demonstrated to be an artificial line between the Tolkien-imitating, heroic, commercial fantasies, and what he describes as “an older, eclectic fantasy tradition.” The goal of looking at stories outside of the sword-and-sorcery tradition is laudable; I’m just not sure dismissing said tradition is necessary to justify it.

For me, a more apt image for the fantasy genre in general and this collection in particular can be found in one of the stories the anthology includes: Steven Millhauser’s “The Barnum Museum.” In this story, my favourite in the anthology, we are introduced to a museum with an apparent infinity of rooms full of colourful, mysterious, and wondrous creatures and things. The museum is visited by people of all ages and aspirations, and all find something of what they’re looking for. The house of fantasy is one with many rooms, and The Secret History of Fantasy allows us to enter a few that we don’t visit too often.

This is a very well-done collection: the stories are all, in many different ways, pleasures to read, and the essays are very interesting. While I take issue with the stated premise of the anthology, I can find no fault with the product.