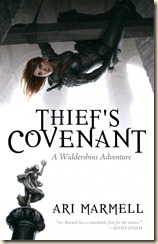 Once she was Adrienne Satti. An orphan of Davillon, she had somehow escaped destitution and climbed to the ranks of the city’s aristocracy in a rags-to-riches story straight from an ancient fairy tale. Until one horrid night, when a conspiracy of forces — human and other — stole it all away in a flurry of blood and murder.

Today she is Widdershins, a thief making her way through Davillon’s underbelly with a sharp blade, a sharper wit, and the mystical aid of Olgun, a foreign god with no other worshippers but Widdershins herself. It’s not a great life, certainly nothing compared to the one she once had, but it’s hers.

But now, in the midst of Davillon’s political turmoil, an array of hands are once again rising up against her, prepared to tear down all that she’s built. The City Guard wants her in prison. Members of her own Guild want her dead. And something horrid, something dark, something ancient is reaching out for her, a past that refuses to let her go. Widdershins and Olgun are going to find answers, and justice, for what happened to her — but only if those who almost destroyed her in those years gone by don’t finish the job first.

This is the start of what promises to be a great new YA fantasy series. I’d only read one other novel by Ari Marmell before reading Thief’s Covenant, The Conqueror’s Shadow, which I thoroughly enjoyed. I was intrigued by the idea of Marmell writing YA fiction, so came into this with high expectations. Luckily, my expectations were exceeded: this novel is a fun, action-packed and sneaky adventure. Thief’s Covenant features engaging characters and a great story, and kept me reading well into the night on more than one occasion.

The novel opens with a graphic scene in the aftermath of a mass murder. This was unexpected, but also very well done. Widdershins is hiding in the rafters above, and takes in the whole thing – these people are her friends, but the reader knows nothing about them beyond that at this stage. The novel alternates between the ‘present’ day and flash-backs, the latter of which bring us extra details about Widdershins’s past and also what is going on in the main storyline (each one is set that little bit closer to the present). Marmell uses this device extremely well, giving us just the right amount of information to happily follow along.

Widdershins is a superb protagonist. She is skilful and strong, but also slightly vulnerable and reckless. She has a lot of moxie, and an occasionally inadvisable sass that she deploys at times when diplomacy might be better called for. She is a frustrating character – not for the reader, but for some of the other characters she interacts with. For us, she's delightful. She gets into a lot of trouble with the City Guard, the higher-ups in the Thieves’ Guild, and just about everyone she comes into contact with. A lot of the novel is taken up by Widdershins attempting to avoid or address the unwanted, frustrated attentions of her enemies and peers. In particular, a group of Guild enforcers led by the man-mountain Brock, and his two sidekicks “Scarface” and “Pockmark” (Widdershins never deigns to learn their names).

Marmell has populated this novel with a lot of superb and well-drawn characters. They all felt natural, and their interactions were realistic and often amusing, from the conspirators to companions. Even Olgun, Widdershins’s god, is a great character. I really liked the way Marmell wrote him into the story – he gives us a good sense of the god even though we don’t actually see or hear him at all.

While we follow Widdershins around the city, on jobs and in the past, there is an on-going, wider conspiracy moving towards its end-game. Started years ago, the conspirators had a hand in the destruction of Widdershins’s former life. There are a multitude of power-centres attempting to out-fox each other and to ascertain who’s pulling which strings in the city, and Widdershins has a tendency to find herself in the middle of things. The official visit of a religious official throws in more complexities (as well as another great character) into the mix. I was really impressed with how Marmell was able to bring us a world that is fully formed without relying on any considerable exposition. Our impression of the world forms naturally over the course of the novel.

I liked the way religion works in this world. All of the gods exist, as long as someone believes in them. A Pact has been struck, to ensure non-aggression between the various religions and for the most-part, it keeps the peace. This forms an important part of the story, as Widdershins finds herself at the centre of a religious plot.

Marmell’s sense of humour comes through nicely in the novel. It falls more  in line with contemporary Pratchett-style observation – whimsical, slightly absurd tendencies of humans as a collective, that sort of thing – and never drowns out the wider story. There’s not a lot of it, but it’s good. I found myself smiling or chuckling at quite a few comments, asides and quips.

The novel builds to a great ending, as the conspiracy is revealed. Not everyone survives, Widdershins is taxed like never before, and a few secrets are revealed.

Thief’s Covenant is a fun, brisk story. I got sucked in every time I picked up the book, and the pages zipped by. This is a thoroughly entertaining novel, and one that should appeal to younger and older readers alike. Marmell doesn’t condescend to the reader, and instead gives us a great fantasy novel. I’m very glad I won’t have to wait too long before the second book in the series, False Covenant, is available.