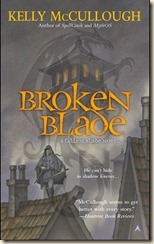 A good, if flawed start to a new series

Once a fabled Blade of Namara, Aral Kingslayer fought for justice and his goddess alongside his familiar, a living shadow called Triss. Now with their goddess murdered and her temple destroyed, they are among the last of their kind. Surviving on the fringes of society, Aral becomes a drunken, broken, and wanted man, working whatever shadowy deal comes his way. Until a mysterious woman hires him to deliver a secret message-one that can either redeem him or doom him.

I’d been looking forward to reading Broken Blade for a while, ever since I stumbled across it through Twitter. It falls squarely within the new wave of assassin- and thief-related fantasy, which I’ve been rather enjoying, but at the same time offers some interesting twists on what have become the tropes in that sub-genre. The novel is a good beginning to a new series, with plenty going for it, but it nevertheless did not meet all my expectations. It is, however, probably perfect for fans of Steven Brust’s Vlad Taltos series.

Aral Kingslayer, former religious assassin, is now a thief, or Shadow Jack, plying his lonely trade in the city of Tien. At the start of this novel, he takes on a seemingly straight-forward and simple job, but as is the way of these things, it turns out to be something else entirely. There is a lot more going on, and the potential ramifications are considerable. Someone from his past, long-thought dead, seems to be hunting him. A dispossessed noble wishes to be reinstated in their rightful place among the elite. The novel follows Aral’s attempts to navigate these obstacles, and get to the bottom of a number of mysteries. Over the course of his travails, he will come face-to-face with warrior baronesses, the undead, the various law enforcement organisations of the city, less-savoury elements of Tien’s population, and a fair bit of cool magic, and a good number of people who want to kill him for one reason or another.

The focus of the novel is very much on Aral (it is, after all, presented in a first-person narrative) and Triss, Aral’s shadow familiar. A lot of the novel covers their relationship, which has an interesting and quite endearing dynamic. They are like a loving (platonic) couple, almost, with Triss frequently chiding Aral on his drinking but extremely devoted and protective. They are best friends. It’s unavoidable that a comparison will be drawn between this and Jon Sprunk’s Shadow series (it’s what sprung to mind as soon as I read the synopsis for Broken Blade), but I should stress that they are distinct from each other in many ways – the dynamic between Caim and Kit is very different, and Kit doesn’t actually interact with anyone other than Caim. Triss, on the other hand, has some pretty awesome and diverse abilities he can use to support Aral.

The novel is told from Aral’s perspective, in a first-person narrative. He is an interesting guide to this world, but I think he could have been better. He had one major flaw: he has no real edge to him, and I wonder if the author was maybe too cautious about trying to make him virtuous and over-sold it a bit. I struggled to connect with Aral, because there was simply nothing objectionable about him. In some scenes, when we get a look back at his early years as a Blade, a lot of his idealism and righteous indignation at the wrongs of the world can be put down to youthful naiveté and enthusiasm. In scenes set in the story’s present, however, this is slightly less forgivable and less believable – his entire life and religion were destroyed, and yet the only way his grief manifests is in a drinking problem and a proclivity for solitude. However, rather than being a real challenge to overcome, he is rather a good-natured drunk who everyone seems to like just fine. He gets hangovers, and his abilities are slightly impaired, but it hardly presents much of an obstacle to overcome as he manages some amazing escapes and still exhibits some considerable skills with subterfuge, evasion and bladed weapons. This lack of edge or real complexity, coupled with the first-person narrative, is where the rest of the novel suffered and prevented me from engaging fully with Aral. In my opinion, I think Aral could – perhaps should – have been a little more nuanced and complex, and this would have improved the novel.

Maylien, Aral’s eventual, inevitable love-interest is somewhat predictable, and I found their hook-up to be rather bland to read about. Sure, she has a lot going for her, but there are also a couple of issues I had with her personality and worldview that just didn’t make much sense (they are considerable spoilers, so unfortunately I can’t go into it much more than that). Other characters, for example the law-enforcement officer who seems to operate outside of official boundaries was really interesting, and yet she didn’t have much of a role to play. Likewise, the wizened librarian, who is clearly a mentor and friend of Aral’s, is also one of the most interesting characters in the novel and yet features in but one scene. I do hope we spend more time with them in future novels.

Aral is a taciturn sort, not given to seeking out company, which means there’s not a lot of dialogue. McCullough’s prose has a nice, brisk pacing, but without much dialogue to convey exposition and world-building, there were certainly moments when the over-description veered dangerously close to telling, rather than showing. This was a particular problem in the middle of the novel. It is a difficult balance to walk, though – Aral is a solitary figure, so in order for there to be a story, he has to show us the world through his eyes. Some of the description is really good, and I was particularly grabbed by the account of how Aral got the epithet “Kingslayer”, which I thought had a lot of imagination and originality (it’s on a par with the ingenuity of Durzo Blint’s first job in Perfect Shadow).

Now, where McCullough excels is in the magic system he has created for his characters. When Aral’s describing his magic, or we’re seeing it in action, the prose is streamlined and brisk enough that one doesn’t mind the extra detail, and a lot of this magic is pretty original and interesting. All of the various magics drawn on by Aral and the other factions in the novel, in fact, are varied and interesting – from the deathmarks, Triss’s abilities, to those of the various law enforcement personnel we meet along the way – they are all written confidently and engagingly.

The first and last quarters make up the best half of this novel, but the middle section I think needed tightening. McCullough throws up a  few surprises along the way – many of them interesting – but also leaves a few things hanging, and it’s unclear if they were just random extras, or if they are going to become more important in volumes to come. I’ll be interested to read at least the next novel in the series, Bared Blade, if not all of them. There’s a lot of potential in this world and series, and I hope McCullough fulfils it over the next few novels.

Broken Blade’s synopsis would suggest a grittier read than I think the novel turned out to be, which I admit was a disappointment. Broken Blade is a novel worth trying, but I’m not entirely sure how I feel about it, just yet. If McCullough deals with the aforementioned issues with Aral and description, making him a more compelling protagonist, and allowing other characters to take centre stage for even a little bit, then this could become a very good fantasy series.