Before I get to the reviews, I wanted to write a quick comment about The Road Ahead in terms of comic reviews on Civilian Reader: The weekly round-ups are probably going to become shorter. There are fewer on-going series I want to read in short chunks, so I’m going to start focusing on just a handful of my favourites, but also some single first issues, maybe mini-series, and a few Three Issue Tests – this means I’m going to be a lot more discerning and brutal when it comes to deciding on whether or not to keep buying monthly issues.

[Titles I receive for review from the publishers will, of course, still feature, but will still be addressed and reviewed as if I’d bought them myself – same standards, same potential vis-a-vis Three Issue Tests, and so forth.]

This week, I bring you an unhinged, super-powered loser, a team of super-powered protectors, the hunt for a rogue paramilitary terrorist outfit, some transdimensional magic, and some KGB agents belatedly activated after the war is over. 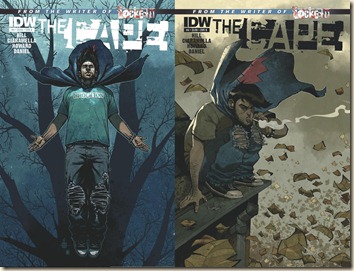 What pushes someone to hurt the people they love? Eric has shown us that his capacity for evil is limitless, but is something else to blame?

Two down, one to go. While the city of Boston burns from the crash of Florida Air flight 4877, Eric gives Nicky a final ultimatum: Meet me or someone other than you dies. Grieving from the death of his mother, and wanting to put an end to the madness, Nicky sets out to confront Eric on top The Prudential Building. The stage is set for the final act.

Hm. I have mixed feelings about this final chapter. Eric’s psychosis and jealousy of his brother, Nick, is palpable, and their confrontation on top of the Prudential Building is intense and brutal, making me wince a few times. But, despite the fraternal-rivalry and airing of family issues, the issue as a whole nevertheless ends the series on a bit of a flat and sudden note (the comic’s only 21 pages). I think this story will work better as a collected edition (especially if it included the original one-shot).

The artwork’s very good, and is suitably gritty and has a grimy feel to it that seems to match the story – it’s hard to explain, but the artwork’s perfect for the story.

This is a very interesting series, which pushes the boundaries of what we expect from a comic and super-powered protagonist. It is also, however, one I think you should wait for the collected edition – it will feel like a lots more story, and be more satisfying. 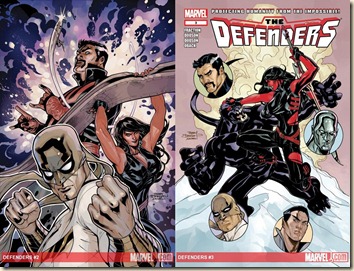 What is the secret of Wundagore Mountain? The Defenders vs. the Breaker of Worlds!

Inside Wundagore Mountain, the Concordance Engine comes to life, and the Defenders’ mission snaps into crystal-clear focus. What does this miraculous machine do? What happens if it doesn’t do its job? And how many more are there around the world?

Well. This was a little disappointing. I remember liking the first issue quite a bit. But these two issues didn’t feel quite up to scratch. They’re both quite hectic. The artwork’s nice, with bold colouring and clean images (and some nice focus-effects for movement, etc.). It’s just also a little too much, and the bad guy’s not really that compelling or scary. Together, these issues felt flat and didn’t live up to the first issue at all. A real pity, as I had high hopes for this series. This is where I stop reading The Defenders.

Also, why does there have to be quippy comments at the bottom of many of these pages, in the margins? Do these appear in other Marvel titles? (I haven’t spotted them in the few that I read already.) I know which pages are adverts, I really don’t need to be told that (or informed “That was a good ad”, as we are at one point). Those bits of text were distracting and annoying. Please don’t do it again. 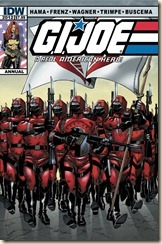 G.I. Joe is on the trail of a rogue unit of Crimson Guardsmen. But the Joes aren’t the only ones hunting down the renegade threat: Zartan and his Dreadnoks have been sent by COBRA to handle the situation. This could get ugly for the Joes.

A Cobra sleeper agent becomes a victim of the economic crisis and jobs contraction, and decides to take things into his own hands, abusing the Cobra resources he has access to. Naturally, this annoys Cobra command, and the Commander orders Zartan to get to the bottom of things, and put the kibosh on Ted’s operation.

This is a pretty good annual – the story’s long and felt like a good, original take on Cobra’s covert sleeper cells, but given a contemporarily resonant spin. The sleeper agent’s motivations have a shade of the 1993 movie Falling Down, when the rat race just gets too much, and one thing piles on top of another to just tip you over the edge. Only, instead of Michael Douglas getting pissed off in a MacDonald’s, it’s a Cobra operative fired from his job. With a knack for mixing explosives.

Zartan’s chameleonic abilities allow for a couple of amusing scenes, and the confrontation between the Red Guard and the Dreadnoks has an amusingly confused audience (won’t spoil it).

It’s not quite as well-written as the Cobra, G.I.Joe and Snake-Eyes on-going series, but it’s still a good, fun issue. Something about this makes me think it’s written with younger readers in mind – that’s not to say it reads overly-simplistic, but there’s no blood whatsoever and the dialogue is amusingly PG.

If you’re a fan of the franchise, though, then you should find this quite fun, and it’s nice to be reading about some characters that are familiar from the original series (Mutt and Junkyard, for example, who were in the first G.I.Joe comic I ever read). 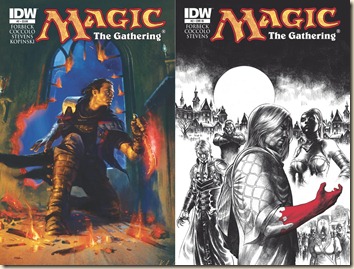 On the trail of the person who destroyed his town, Dack Fayden must travel to Innistrad, a plane of savage monsters, strange transformations and sinister magic. Naturally, Dack immediately gets caught up in a vampire attack at a secluded inn.

Another superb issue, this time we join Dack as he stumbles across an inn overwhelmed by vampires. We learn a little more of this plane, as well as more about the attack that wiped out Dack’s childhood home, and he picks up a couple of companions. We are also introduced to Dack’s nemesis, which promises some interesting things in the rest of the series.

With plenty of action and cool magic, this is a great fun fantasy adventure. The artwork is also superb – really strong colours, but not over-powering, so there is still plenty of atmosphere and nuance.

I really must try some of the Planeswalker novels at some point (especially the one written by Ari Marmell) – this is a really interesting setting, and Forbeck and Coccolo have done a great job of bringing it to life and keeping it engaging throughout.

[Along with the Planeswalker series of novels, there are two hefty comic collections also available, if you’d like to explore this setting in graphic format: Path of the Planeswalker Volumes One & Two.] 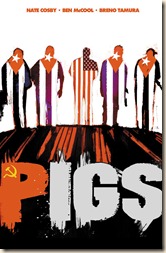 In 1962, a KGB sleeper cell was placed in Cuba. Half a century later, the cell's children are assigned to overthrow the US government. But why... and why now?

I must say I’m surprised this collection’s already been put out – it’s quite short, only featuring the first four issues of the on-going series. It was, however, also on special offer at my local store, so I decided to pick it up on a whim. It’s noticeably different from a lot of stuff I’ve been reading, so seemed like it would make a nice change.

This is a very well-paced series. It’s not break-neck, but it moves at a good clip, as the group of agents makes their way through the US. The first issue/chapter finished on quite an arresting scene and image, as does the fourth – it’s not hard to see how people were hooked and came back for more. Reading this short collection certainly left me wanting more. I would have preferred the collection to have maybe one more issue included, but maybe I’m just greedy. Regardless, I’m really glad I don’t have to wait too long for the second collection, which is due on May 2nd 2012.

The artwork is gritty and atmospheric – utilising darker shades and tones than, for example, many DC and Marvel titles. The art certainly enhances the story, adding depth and nuance to Cosby & McCool’s story. They’re not the crispest of images (rougher, sketchier lines), but I didn’t mind that so much in this instance. (It’s no secret I prefer cleaner lines to my comic art – probably a result of earliest experiences being with G.I.Joe, X-Men and Spider-Man, although I am slowly coming ’round to the grittier styles.)

I thought this was awesome, and definitely think anyone wanting something a little grimmer, with plenty of edge and grit, should check this out ASAP.

Road Ahead for DC New 52

I’ve managed to get all the missing DC New 52 issues I was after (that is, #4-6 of almost half of them), so I’ll start putting together the catch-up posts over the next few days. After this… Well, I really don’t know what I’m going to do. Given the cost, I’m tempted to go back and focus on collected editions only.

There are quite a few Superman and Batman graphic novels I’d like to try out, despite the possibility that they’re now defunct because of the re-boot. I’ve already managed to read a couple of the Jason Todd/Red Hood graphic novels, and while there are a couple of things that don’t jibe with the New 52, for the main they are a great introduction to the character and his tricky relationship with Batman.

Lots of other series unrelated to the most-likely-to-get-a-movie superheroes are of interest, and certainly I’ll be taking a look at them: American Vampire, Fables, Witchblade, Y The Last Man, The Darkness, Ex Machina, Locke & Key, and a bunch of others from Marvel, DC, Image and more. Given the prices on Amazon, Barnes & Noble and other online stores, these collections can often cost just a little more than two or three single issues.

There are also certain authors I’ve come to trust, so may take some time to look at their back catalogues: Mark Waid, Paul Cornell, Scott Snyder, Gail Simone, Abnett & Lanning, Judd Winick, and Greg Rucka, to name but a handful.

DC’s also going to be unrolling their second-round of New 52. I’ll certainly be getting at least the first issue of each of them (except, maybe, G.I. Combat), and probably the Three Issue Test of at least Batman Incorporated, Earth 2, World’s Finest and Dial H.

Posted by Civilian Reader at 5:01 PM