An Interview with PHILIPPA BALLANTINE

Philippa Ballantine is a very busy author: she has three series in or near publication, Books of the Order, Ministry of Peculiar Occurrences, and The Shifted World. I first heard of her through A Fantastical Librarian Mieneke's review of Geist, which I’ve recently picked up for my Kindle and intend to read as soon as I have a spare moment. In the meantime, after some digging on the interwebs, and finding out a little bit more about Ballantine’s series, I thought an interview would be a great way to introduce her and her work to the readers of this blog.

You’ve got a couple of series in publication, so I’ll deal with them each in turn. First up, your Books of the Order series, which thus far includes Geist and Spectyr (published by Ace). How would you introduce the series to a new reader, and where do you see it going in the future?

It’s a supernatural fantasy series, set in a world where ghosts (or geists) in this case are an established fact. In such a place, a group of people are dedicated to protecting humanity. These Deacons of the Order use rune magic, and work in pairs to fight back the unliving. Geist follows Deacon Sorcha Faris and her partner Merrick as they are thrown together and must work to not only hold back a geist incursion, but also protect the Empire from a conspiracy that threatens to tear it apart. 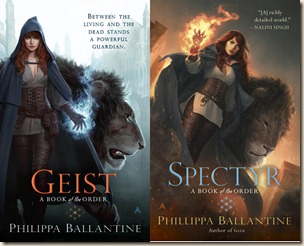 I’ve always loved ghost stories, and been interested in the mythology that different cultures have about it. I also have an unhealthy obsession with ‘reality’ ghost shows. I started thinking “what would it be like if instead of conjecture about the supernatural, it was just an accepted fact?” From there it was a natural progression to imagine the Deacons dedicated to stopping them. I modelled them after a religious order because in medieval times the church was the place civilization and learning was preserved. In the world of Geist however, the Order has turned away from religion. 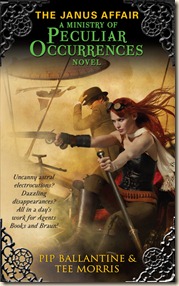 You’re also working on a steampunk series with Tee Morris, the Ministry of Peculiar Occurrences (Voyager). How would you introduce this series, and how did the collaboration come about?

It is set in Victorian London where Her Majesty’s Ministry of Peculiar Occurrences investigates the bizarre and the unusual. Miss Eliza D. Braun, a field agent from New Zealand with a fondness for dynamite, finds herself demoted to the Ministry Archives, where she teams up with Wellington Thornhill Books. He is horrified to be dragged into her adventures after she uncovers a series of unsolved cases. Explosions, knife fights and opera ensue.

The whole thing started as a concept for a podcast for pay, and I didn’t want to write a whole novel by myself. I brought Tee on board, and we started the podcast as a spin-off of a novel we’d talked about, but hadn’t written. Actually, that novel has not yet been written! Then, after I mentioned this project I was working on my blog there was some interest from publishers, and we turned it into a novel. It was a very circuitous route to get to publication – but those situations are sometimes the most fun and interesting. The ones you don’t see coming!

What can you tell us about your next project, The Shifted World series, coming in 2012 from Pyr Books? 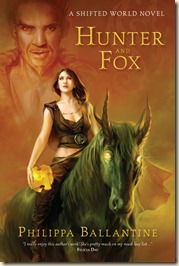 It is a book I wrote back in 2006, and the first book I got my agent with. Geist sold first because back then, the fantasy market was rather dire and no one was really buying it. Now Pyr has picked it up, and with Lou Anders’ help it is ready to go. It is centered around a woman without hope, who is working reluctantly with the enemy of her people. She finds salvation – or rather has it forced on her by a rebel, and must re-examine her crimes and her decisions.

It also features civil war, an unholy puzzle and a demonic horse.

It was all my father’s fault. He started reading my the Hobbit and then Lord of the Rings as a bedtime story. I really didn’t have a chance – genre got its fangs into me early! Before too long I had devoured his entire shelf of genre books.

I love writing, and I have even learned to enjoy editing. Sometimes the business of writing can get in the way of that – but I am learning to separate the two. There is the writer and then their is the business manager, and as long as I compartmentalize them everything goes along much better. I write on a laptop, so I can pretty much write anywhere, but my favorite location is on the sofa with Sebastian (my huge Siberian cat) lying against my leg, and my playlist of writing music going in the background.

Shortly after my Dad finished Lord of the Rings I started fantasizing about being a writer. One of my schoolmates from about the age of 13, says she remembers me wandering around school writing in my green notebook. I had completed my first ‘novel’ at fourteen – though I wouldn’t ever share it with the public now. My mother has it locked away in her house for blackmail purposes.

I am certainly enjoying the resurgence in high fantasy, and the strong arrival of steampunk in the genre. It shows that people still want to read about worlds of wonder and adventure — which is nice because that is what I want too. I guess my corner of it is intrinsically linked with my identity as a New Zealander. I think that the independence of that place, as well as a certain sense of isolation comes through in my work. If I could bring a little more awareness of my homeland to the world through fantasy, it would make me a happy writer.

Right now Tee Morris (my co-writer and new husband) and I are planning book three for the Ministry, and then I have to contemplate the final novel in the Books of the Order for Ace. Harbinger will complete the series for Ace — but that doesn’t mean I am shutting the door on that world. After that it is onto the second novel for Pyr books in the Shifted World series.

I am in the happy place of reading a book to blurb. God Save the Queen by Katey Cross is a fabulous new steampunk, and I can’t wait to get to the end. I am also reading Dreadnought by Cherie Priest. Cherie’s steampunk is very different from ours, but a lot of fun, and I love the American setting! 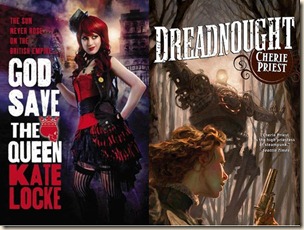 I was an absolute washout at ballet as a child, but pretty good as a tap dancer!

The arrival of three more books on the shelves. The Janus Affair; a Ministry of Peculiar Occurrences novel is coming May 2012 from Harper Voyager. Then there is Hunter and Fox from Pyr Books in late June, and finally Wrayth the third in the Books of the Order series. Phew!

After that I will be looking forward to taking a break… for at least five minutes.