“Throne of the Crescent Moon” by Saladin Ahmed (DAW) 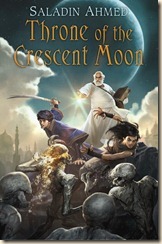 An intriguing debut, from a great new voice in fantasy

The Crescent Moon Kingdoms, land of djenn and ghuls, holy warriors and heretics, Khalifs and killers, is at the boiling point of a power struggle between the iron-fisted Khalif and the mysterious master thief known as the Falcon Prince. In the midst of this brewing rebellion a series of brutal supernatural murders strikes at the heart of the Kingdoms. It is up to a handful of heroes to learn the truth behind these killings: Doctor Adoulla Makhslood, Raseed bas Raseed, Zamia Badawi.

Together with a handful of allies, they learn that the murders and the Falcon Prince’s brewing revolution are connected. The companions must race against time – and struggle against their own misgivings – to save the life of a vicious despot. In so doing they discover a plot for the Throne of the Crescent Moon that threatens to turn Dhamsawaat, and the world itself, into a blood-soaked ruin.

The buzz surrounding Throne of the Cresent Moon has been going on for quite some time. I had planned on reading and reviewing the novel much sooner than now, but I accidentally forgot it at home when I went on holiday. Needless to say, it was the first book I read upon my return, and I found it to be quite satisfying. It’s a different type of fantasy, with a different focus and style to what you might be used to. It remains, however, very well-written and engaging throughout.

This novel is, above other things, a character study focused on three key players. Doctor Adoulla Makhslood, the “last real ghul hunter” in Dhamsawaat, is old and tired of his life, and really just wants a quiet cup of cardamom tea and maybe a pastry. Adoulla has grown weary of hunting monsters, and is more than ready to retire. When a small boy approaches him about a pack of ghuls that attacked and killed his family, Adoulla sets out to solve the killings. Over the course of his investigation, however, he discovers that his enemy is far more powerful than any he has faced before, and also far more ambitious and evil.

Raseed bas Raseed, Adoulla’s young assistant, is almost his exact opposite: he’s pious to a fault, and his dervish skills make him a formidable combatant. Adoulla and Raseed are aided in their mission by the surprise arrival of Zamia Badawi, “Protector of the Band”, a tribeswoman who is likewise hunting the ghul. Gifted with the near-mythical power of the Lion-Shape, Zamia lives only to avenge her father’s death and the destruction of her tribe.

The three main perspectives feel different and distinct. We get three solid voices, and it’s great to see the world filtered through their perspectives: Adoulla’s world-weary cynicism and exhaustion; Raseed’s youthful fervour, energy, confidence and enthusiasm; Zamia’s cautious suspicion, and self-consciousness. In addition, Raseed and Zamia experience a heavy dose of adolescent insecurity – in part brought on by their budding feelings for each other.

It’s quite interesting, seeing Raseed, who can wield a sword better than any opponent, and take attacks by ghuls and creepy manjackals, effectively disarmed when he meets Zamia. The tribeswoman, on the other hand, takes it a little better, only her suspicions and preconceived dislike of urban dwellers holds her back.

Litaz and Dawoud are two other great characters, who add an important part to Adoulla’s eclectic band of ghul hunters. Litaz, in particular, offers yet another wonderful alternative point of view, and one that is ever-practical. For example, when around Zamia at a particularly tense moment, instead of being concerned about the angry, unpredictable girl with an ability to change into a lion, Litaz is more intrigued by how Zamia is able to make lion noises from a girl's throat, and also wonders where her clothes go when she makes the change (both very sensible queries).

Ahmed’s writing is great – there is a steady pace and flow to the prose. The world we explore alongside Adoulla, Raseed and Zamia is fantastic. Dhamsawaat, a sprawling city with a Middle Eastern-flavour, reminded me a little of Istanbul and Casablanca (adjusted for levels of modernity, of course). Ahmed conjures up a great image and atmosphere for the city and wilderness, realising the city on the page very well, and I felt quickly at home in the setting.

The novel has a measured feel to it: Ahmed lets his story unfold in an unhurried manner. This is no bad thing, and matches the social interactive style of the characters – they spend a lot of time talking around things, allowing for a better, deeper picture of the world, its people, and the city’s political climate (which is extremely tense, and still adjusting to the rule of a new Khalif).

This means that not a whole lot really happens. There’s a lot of sitting around, talking and figuring things out. This feels far more realistic than novels that have deus ex machina fortuity woven into the plot. It’s a scholarly investigation, but also a character piece. Some will not like this at all – if you’re after epic battles and frequent combat, then Throne of the Crescent Moon will probably not be for you. That being said, the last 15% of the novel has some great action as the story comes to a dramatic, tragic denouement.

The magic system is wonderfully complete, original, and even realistic. It’s not all flash, there are repercussions and costs to using the more impressive spells. The “evil” magic is extremely, brilliantly sinister (the “skin ghuls”? Dark genius), and the ‘man-jackal’ is an awesome enemy that taxes Adoulla and his companions on a number of occasions, both psychologically and physically.

If I had one niggle, it’s the inconsistency in some of Ahmed’s writing style. There are moments when certain idioms feel a little forced. For example, the use of phrases like “five and ten years old”, “damned-by-God” and “mate-of-the-soul” seemed needlessly archaic/affected, compared to the rest of the writing. It’s certainly forgivable, but it still bugged me, just a little, as other idioms are ‘translated’ (for want of a better word) more naturally – “unless I miss my guess”, for example. It felt a little like this approach was taken to make the characters feel more different to your standard European-influenced fantasy characters, but I don’t think it was really necessary.

There’s some early mention of past adventures, which left me feeling only slightly like I was late to the party (*cough* eBook excuse *cough*).

I was restless and distracted throughout reading it (life has a tendency to intrude), so while I didn’t blitz through it as quickly as some reviewers seem to have, Throne of the Crescent Moon managed to suck me in, and even caused me to miss my subway stop once because I was so engaged with the story. I loved the world and the characters.

It’s a very strong debut, but maybe one that won’t appeal to all fantasy fans. I would still recommend it to anyone who listened: it’s original, very well-written, and engaging.