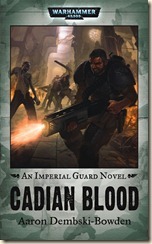 The Imperial Guard attempt to purge a horde of plague zombies!

When the Imperial shrine world of Kathur is blighted by Chaos, the brave Guardsmen of Cadia are sent to reclaim it. The plague of Nurgle has set in deeply on the planet, forcing the Cadians into battle with an innumerable legion of the infected. In the midst of battle, Captain Parmenion Thade is thrust into an unlikely commanding role. Yet, he cannot imagine what lies ahead on Kathur, and just how important it will be to ensure victory there…

I’m a big fan of Aaron DB’s novels – his Night Lords series and his Horus Heresy contribution The First Heretic are among the best novels Black Library has ever published. I completely missed Cadian Blood, his debut novel when it was available in print, and have been meaning to read it ever since it was made available as an eBook. While it does not quite match his others, it is still a really good novel, and one that shows the promise he would later build on.

Cadian Blood offers a classic-style Warhammer 40,000 tale – a planet has fallen to cultists and the depridations of Chaos after the Imperium has failed to deliver salvation – in this case, from a zombie-creating plague. The story follows the Cadian 88th, and along with giving us a glimpse at their fighting style and prowess, it gives us a glimpse at life in the Guard. We are introduced to a great cast of characters, too. The Cadians must struggle against an Imperial leadership who don’t understand them, and one the Cadians have no wish to understand in return. The 88th is an interesting regimental guide, actually – they are exceedingly sure of themselves, which does more than skirt along the boundaries of arrogance, and they are not a little inflexible when it comes to people from other planets and cultures. They are born and bred to fight the forces of Chaos, so they have difficulty engaging and relating to anyone from other planets. There is a greater level of respect and understanding between Captain Thade and the Raven Guard Space Marines, than there is between Thade and other Imperial Guard leadership.

All of the characters are very well drawn, but particularly Shock Troop leader Jevrian, guardsman Taan Darrick, Captain Thade and Inquisitor Caius. They all convey a stoic cynicism about warfare and the Imperial way – they are not blinkered, and almost eagerly criticise incompetence and illogical orders. Aaron manages to do with these characters what Dan Abnett has been able to do with his Gaunt’s Ghosts series: very quickly make us care for and invested in the fates of his characters.

“Delightful. You’re ploughing down plague victims now. What happened to respecting the dead?”

“They’re not exactly respecting us.”

The author’s prose style is superb – there is an economy of phrase and narrative that belies the fact this is his debut. He offers a restrained level of description, which ensures the story keeps moving at a great pace, without going overboard – “crow-black and dragon-loud”, for example, is a great way to describe a war-plane, that gives us everything we need to know to picture the scene. Some of the description will have a better impact if you’re already familiar with the Imperial aesthetic (“savagely overdone architecture”, for example), but I think this is a good novel for people not familiar with the Warhammer 40k setting and imagery.

The frequent action scenes are expertly written. There’s plenty of realistic, fun and engaging dialogue and banter – especially from Darrick – and plenty of shrewdly observed cynicism from the soldiers, as well as the officers.

Given that this novel was part of the Imperial Guard series, each novel in which focused on different “famous” regiment, Aaron DB is restricted to writing within some guidelines. Therefore, Cadian Blood ticks off a lot of Imperial Guard tropes – rule-breaking officers, tensions between front-line squads and regimental leaders and those who direct and orchestrate from behind. Therefore, the novel doesn’t quite exhibit the full extent of the author’s creativity and skill, as his Night Lords and Horus Heresy fiction does. Nevertheless, the authors makes the Cadian troops his own, and creates well-rounded, realistic and fully-formed characters you care about almost immediately, and puts them in a fresh-feeling, yet-still-familiar story. It has a very satisfying ending, too.

The story is brisk and action-packed. It’s an amazing debut, actually – assured, confident and clearly evincing a love for the subject material that Aaron DB makes his own. Anyone wanting to write BL fiction (or military sci-fi in general) MUST read DB’s novels and learn from his style. He is, quite frankly, one of my favourite authors.

There’s only one other of Aaron’s novels that I’ve not read, Helsreach, but I’ll rectify that in the next couple of months.