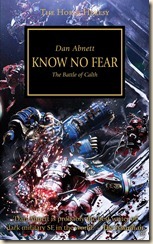 The Heresy arrives on Calth

The Battle for Calth is a huge event in the canon of the Horus Heresy – it’s when the Word Bearers’ corruption was laid bare on a Legion-wide scale, and it’s also when the Ultramarines entered the conflict. Know No Fear is a different kind of Heresy novel, but I think Abnett makes it work very well, and this is sure to please fans of the franchise. No matter how many novels Abnett writes, he always manages to surprise.

Despite my long-held interest in the Horus Heresy (ever since I read and then repeatedly re-read the 1996, second edition of Codex: Chaos), I don’t recall reading much about the Battle of Calth, so the majority of this was completely new to me. The Ultramarines have been ordered to muster at Calth, bringing together a considerable proportion of the Legion, ostensibly to wipe out Ork forces nearby. The Word Bearers are on their way, supposedly to offer support and mend the tensions between the two Legions. (To catch you up, the Ultramarines were sent to censure the Word Bearers for worshipping the Emperor as a God. Naturally, bad blood persists between the two Legions, and with Lorgar’s new allegiance to Chaos, he and his Legion are itching for revenge.)

I thought the novel was a bit choppy to start with, as Abnett gives us a lot of quick introductions to key players in the upcoming story. The novel is presented in the style of a chronicle, which I thought was a nice change. The plethora of POVs give us a pretty broad impression of the events leading up to and during the Word Bearers' betrayal at Calth, so Know No Fear certainly feels like it has a broader scale than many other Heresy novels. Things settle down around the 40% mark, as there are simply fewer characters left alive, and the survivors start to congregate, thereby consolidating perspectives. I must admit that I wasn’t sure about the structuring at first; it’s all good, but the short segments and frequent changes in perspective meant I wasn’t able to develop much of an early attachment to these characters. This could have been disastrous from another author, but Abnett mostly manages to pull it off brilliantly. The story feels a little bit impersonal, mirroring the Ultramarines’ characters – they are highly analytical, very serious and not particularly emotional. After the Word Bearers reveal their agenda, however, even the stoic edifice of Guilliman’s Legion cracks.

The inclusion of the campaign “mark”, or countdown, heightens the tension of the narrative, as Abnett manages to make us morbidly eager to witness the Word Bearers’ betrayal, while also illuminating the tedium and hurry-up-and-wait of pre-battle preparations which, we experience along with the characters.

When the eventual first scene of betrayal happens, it's awesome in its quiet/touching/rending tragedy, involving the only two members of the two Legions to have struck up a friendship.

Because of the size of the cast, it was a little harder than usual to develop much connection to the characters. Usually, the Heresy novels are told from a smaller selection of POVs, and we get to see events predominantly through the eyes of select characters and their experiences. One of the characters I really liked early on, though, dies, and the second is the one who kills him. Other characters rise to take their places, though, and by the end of the novel I was utterly invested in the survival of a good number of characters. Abnett’s skill for keeping readers on their toes, on the edges of their seats, as well as getting us invested in his characters’ lives remains firmly intact. In Know No Fear, it’s just not as immediate or dominant. Speaking of perspectives, it’s worth mentioning that of the Dreadnoughts – Abnett does something very interesting with this, and I thought it added a great new angle on warfare in the 31st Millennium.

We get a great look at the Ultramarines’ mind-set, their highly serious and unemotional approach to life and governance. This is largely due to Roboute Guilliman, who drills into his Astartes that waging war is not enough; one must learn to be a ruler as well as conqueror, because battles will eventually fade, conquest ends, but “civilisation must last forever”. There’s something distinctly Roman about the Ultramarines and their approach. They focus as much on the governance of post-compliance worlds as subduing rebellious forces. They are analytical, rather clinical and aloof. But, they are also relentless when given a mission or when slighted:

“Leave an Ultramarine alive, and you leave room for retribution. Only when he is dead are you safe from harm. That is what they say.”

There’s an interesting moment, late in the novel, when a member of the Mechanicum highlights one great sadness of the Astartes: “He is transhuman. He knows no fear, and there are many other simple emotions he will similarly never experience” – in this case, a relationship.

It’s worth mentioning another, peripheral story thread, and that’s the one that looks at the mysterious former-soldier, Oll Perrson. It felt like a red herring for the most part, but in the final 10% of the novel, we get some vague and opaque allusions about who Perrson is and what’s going on. We’re left rather in the dark, and while I’d hoped for a little more from this story thread, the end of it is very intriguing indeed. Let’s hope Perrson – actually, many of these characters – reappear in future Heresy novels.

There is one moment that left me feeling rather dissatisfied, and that’s towards the end of the novel, when the narrative tells us that the “most-infamous space battle in Imperial history” occurs, but we are given no detail whatsoever. This gave a rather unsatisfactory end to this particular thread, which I can assume was intentional and that the story will be addressed at a later date. (Sorry for the vagaries of this paragraph, but the story’s related to key events of the novel, and to explain further would be to offer considerable spoilers.)

As has become commonplace in the Horus Heresy novels – not to mention one of their greatest selling-points – we are introduced to another of the Primarchs, and we are given a glimpse of his psyche and temperament. In this instance, Roboute Guilliman remains something of an enigma. Not because he is mysterious, but rather because he is self-analysing to a fault, and rather emotionless (until the betrayal, at which point we see a whole new side of Guilliman). At one particularly telling point, he takes stock of himself in comparison to his brothers: it’s an interesting deconstruction of the Primarchs, and gives us an understanding of Guilliman’s aloof, smartest-kid-in-class sensibilities and sensitivities. He’s not arrogant per se – no more than many of the other Primarchs – but he is analytical in the extreme, and recognises that he is very good at… well, everything.

The final ten percent of the novel is particularly intense and exciting, as the Battle for Calth runs on, and is filled with yet more hints of mysteries to be revealed in the future. I devoured the final chapters of the book, completely unable to put it down. It was a really fantastic end to the novel, and left me wanting so much more.

The majority of the writing is tight and streamlined, but there are a few points when I thought the description was a little belaboured and could have benefited from some minor paring back. It’s great stuff, though. Anyone who thinks the Heresy series hasn’t included enough combat will be pleased to know there’s plenty of it in Know No Fear. And Abnett’s so very good at writing it. An absolute must for fans of the Horus Heresy series and Warhammer 40,000 in general. Definitely recommended.

An interesting (to me) aside: Battle for the Abyss, the eighth novel in the series takes place concurrently, while the audio-drama Garro: Oath of Moment – the first featuring the loyalist Death Guard Nathaniel Garro (who first appeared in Flight of the Eisenstein) also takes place during the Word Bearers’ attack on Calth (I’ll review the latter in the very near future).