A slightly delayed round-up, but one featuring a nicely diverse selection of this week’s comics releases; including three of my favourite on-going series, the conclusion to one, and the start of something a favourite fiction author of mine. 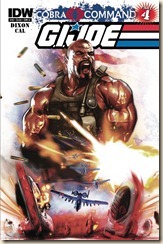 The new Cobra Commander has made his first move – all-out invasion of the Southeast Asian nation of Nanzhao, a centre of the worldwide drug trade. As the world’s eyes turn toward the attack, G.I.Joe moves in to try and stop the invasion and determine Cobra’s goals.

At the temporary G.I.Joe base at Fort Baxter, Mainframe and Scarlett determine that Cobra’s goal isn’t occupation of Nanzhao – instead, Cobra seems intent on destroying the country. Meanwhile, Hawk moves onto the field, joining the Joe teams led by Flint and Snake Eyes. And, while Snake Eyes continues on his own mission, he sends Alpine back to rejoin the main squad…

As Cobra’s plans for Nanzhao unfold before the Joe teams’ eyes, we start getting a sense of just how ambitious the organisation is. Battle-lines are drawn, and finally the Joes and their allies engage with Cobra forces. Also, the extent of Cobra’s evil is revealed, as their actions move beyond consolidation to extermination. The issue also sets up the next step in the story, which continues in Snake Eyes #10.

The artwork is pretty good – it’s not overly sharp, which sometimes made a couple of panels a little less clear, but for the main it is eye-catching and suits the story.

While this issue wasn’t the best in the series so far, it nevertheless had lots of action, and it was certainly nice to see G.I.Joe actually engage with Cobra at long last. This series is shaping up quite nicely, and I’m looking forward to seeing how Cobra’s plans and the Joes’ reaction unfold. 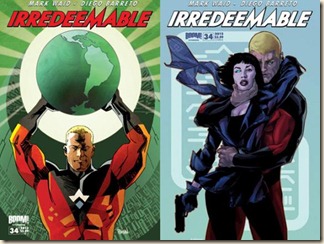 BRAND NEW ARC! GREAT FOR NEW READERS! The Paradigm finds itself severely weakened by the death of in-progress megalomaniac Survivor, but the situation is even more dire than they realize, as an old enemy walks among them… meanwhile, the Plutonian wrestles with his origins as he faces…his parents. This is the perfect jumping-on point for new readers to experience Mark Waid’s superhero-gone-wrong masterpiece!

This was a pretty interesting issue. It’s something of a new beginning, as an uneasy alliance is struck between Qubit and the Plutonian, in the hope of preventing a global catastrophe. We’re kept a little in the dark as to what’s really going on, but the issue offers an interesting montage-moment for the story, as Qubit helps the Plutonian discover the extent of his powers, which have been evolving.

I really can’t recommend this series enough (which doesn’t, apparently, stop me from reiterating this recommendation at every given opportunity…). I’m not entirely sure if this is, strictly speaking, a good jumping-on point, as so much has already happened. Nevertheless, for those who have been following the series, this suggests the story is headed for big things. And I can’t wait to read of them. 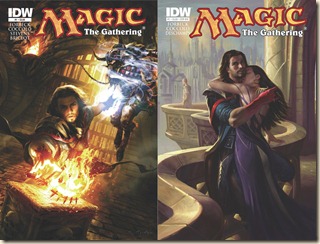 The Multiverse — a boundless expanse of worlds, each different from the last. These worlds, called planes, differ as widely as the imagination. All planes are connected by the substance of the Multiverse itself: the Æther, called the Blind Eternities by Planeswalkers — the only beings who ever see it. With their ability to cross the Blind Eternities from one plane onto another, Planeswalkers are some of the only beings with the ability to explore the vastness of the Multiverse and the wonders that it holds.

In the City of Ravnica, a metropolis so vast that its name has long since become synonymous with an entire plane, our story begins…

I’m a big fan of Matt Forbeck’s fiction (be it his Blood Bowl tie-in novels for Black Library or his own sci-fi and fantasy novels), so I have been looking forward to this comic series ever since I saw mention of it on Twitter.

In this opening issue, we join Dack Fayden, Planeswalker and thief, as he flees headlong through Ravnica from a less-than-subtle job, chased by demons and thrill-kill cultists. So far so tricky. Forbeck gives us a good introduction to the series and world(s), and despite being entirely unfamiliar with the franchise, I felt quite at home. It draws on a number of fantasy tropes that are utilised well, so any fan of the genre should find something here to enjoy. I also liked that it is through Dack’s encounters that we learn about him, rather than through any clunky exposition. The issue finishes on what I assume is going to be the start of something larger, drawing on a mystery from Dack’s past, and connected to the item he liberated at the start of the issue. Coccolo’s artwork is really good – it’s clear and perfect for the genre, and the final page is a great piece. It is also colourful-but-not-gaudy, with plenty of atmosphere.

I really enjoyed this, and am really looking forward to issue two. A must for fantasy comic fans. I wonder if there are any novels based on a similar premise and set in this reality? 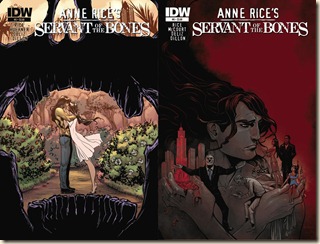 Azriel, the Servant of the Bones, saved the scholar Jonathan in his remote cabin one wintry night. He then tells him a tale of ancient Babylon, gods, kings, and secret rites. Able to see the great god of Babylon, Marduk, Azriel is sentenced to a terrible fate by his elders. But even he doesn’t know the horror that awaits him in a secret chamber, or what the centuries of serving one master after another will turn him into... until he ends up in modern day New York City.

A while back, I reviewed the first four issues of this series, and I’m finally able to bring you a review of the final two issues. Just to catch you up, Azriel’s bones have been sold to Gregory Belkin, the leader of a Church of the Mind of God – imagine a large, church-as-business, not unlike Scientology. Gregory’s daughter, Esther, was murdered and Azriel was called from the bones just before. He is still struggling to figure out his place in the world. Here, we start with Azriel in Gregory’s company, and learn of his megalomaniacal plans to increase his own power and shape the world through his church. The first half of the penultimate issue is dialogue-heavy, much of it coming from Gregory, which makes it rather heavy on the delusions of grandeur. When Azriel refuses to serve Gregory and runs away with Mrs Belkin, the church leader turns his attention to destroying Azriel’s gold-plated bones.

I really like DeLiz and Dillon’s artwork – it really suits the story and the aesthetic of Anne Rice’s writing. I’d love to see them tackle the Vampire Chronicles.

With the whole story now complete, I can recommend this to fans of Anne Rice’s fiction, and anyone looking for something a little different in comics. It’s an interesting story, and while I think the novel would probably do a better job, the creative team who worked on the comic have realised it very well. There is a lot going on in the story, and some of it moves a little too quickly, and perhaps we spent a little too long in the earlier issues setting the scene. But, nevertheless, it works rather well. 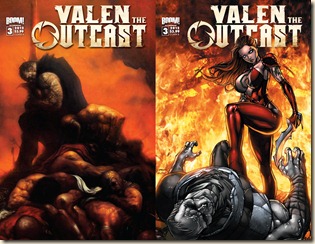 The King is dead — long live the DEAD KING! King Valen Brand was a just ruler and a great warrior until he was killed in battle by the necromancer Korrus Null and resurrected as one of the walking dead. Now he’s considered an abomination in his own realm, an outcast with only one purpose: to restore his lost soul... Valen has slaughtered his former allies, assembled a ragtag band of renegades and smugglers, and cut a path through his war-torn kingdom as a dozen armies vie for his old throne. But when Korrus Null’s right-hand man finally catches up with him, will Valen fall back under the Necromancer’s wicked control?

After the surprising reveal at the end of the previous episode, Valen’s quest to restore his soul comes up against a more personal obstacle (I really don’t want to spoil the story, so apologise for being so vague). This is not a good issue in which to be a horse. Poor things. Overall, this is a great continuation of the story. There was just one instance of an unclear time-shift, but it didn’t come close to ruining or confusing matters unduly. The issue ends on another cliffhanger, as one of Valen’s companions’ pasts comes back to bite them in the ass. A great series, I highly recommend it to all fantasy fans.

Dark Horse: Dawn of the Jedi #0