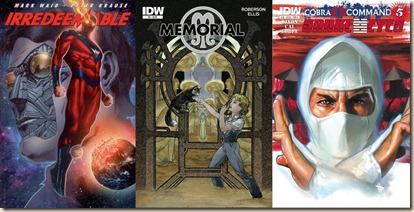 Along with these new issues (all of which are pretty great), this week I’ve been reading some older material for a series of reviews looking at series beginnings. Those will start cropping up on the blog over the next couple of weeks, so keep your eyes open for them. Anyway, without further ado, I give you a great evil-superhero collection, another fairy tale-inspired weird journey, and some ninja beat-downs.

A second round-up will go live later today, taking a look at the Zenescope releases. 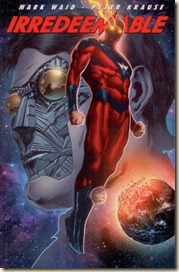 The Plutonian is back on Earth, and he’s brought the universe’s most dangerous psychotic criminals with him to weak havoc on the fragile planet!

Meanwhile, Survivor’s new Paradigm is caught off-guard, leaving the self-proclaimed savior of society without a leg to stand on. When countries around the world unite for one last desperate stand, who will come out on top – and will there be anything left of Earth when the dust settles?

After the slightly less exciting seventh volume of the series, which felt more like the set up for events in this book, Volume 8 sees the series kicking it back up a notch. Every issue ends on a cliffhanger, and events are spiralling out of the Paradigm’s control – as is Survivor, who is becoming ever-more unstable and unhinged. The Plutonian has returned to Earth, and he is not happy.

This is a superb volume, and any fan of the series will love the story within this collection. There are shocking revelations aplenty (especially regarding Survivor and his brother’s connection and past), and I found myself zipping through the chapters. Brilliant. 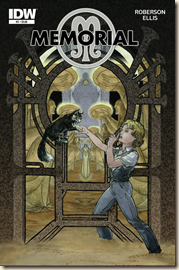 Em and Schroedinger are desperately trying to find Peter, which brings them to the ancient tower of Babylon... only Babylon isn’t so much a what as a who. And just when they think they’re about to get some answers, a host of shadow warriors shows up, grabs Em, and high tails it across the plain. Except Em has a few tricks up her sleeve and things don’t go quite according to the shadows plans. Do they ever?

This is an interesting title. I’m not entirely sure where it’s going, but it has a lot of original ideas and concepts going on. Em is still trying to learn about the powers of the strange Key she’s acquired, as well as Everland, a land where everything’s slightly off. The artwork remains clean and clear, as well as very nicely coloured. As with many third issues, though, this seems to be a pause before something large and important takes place. It’ll be interesting to see what happens in issue four. 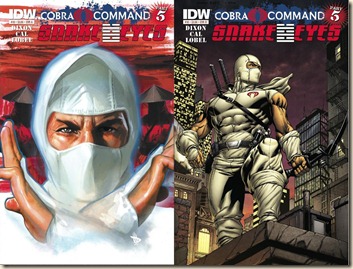 The new Cobra Commander has made his first move — all-out invasion of the Southeast Asian nation of Nanzhao, a center of the worldwide drug trade. As the world’s eyes turn toward the attack, G.I. Joe moves in to try and stop the invasion and they soon realize Cobra’s goals aren’t occupation—but annihilation!

Cobra lays waste to Nanzhao’s opium fields, as well as to the U.N. troops directing the civilian evacuation. While the rest of G.I. Joe tries to make sense of these tactics — and save what lives they can — Snake Eyes, Iceberg, and Helix infiltrate deeper into the country. But their presence has not gone unnoticed…

I’ve always liked Snake Eyes as a character, and over the course of my re-immersion in the G.I.Joe comics series, I’ve only grown to like him even more. Dixon does a great job with the story, dialogue (or lack thereof, given Snake Eyes is mute), while Cal and Lobel have produced a visually very appealing comic – strong colours, clean lines for the very clear art. There’s a high level of detail throughout, which makes every panel great, but those set in the depth of the jungle are particularly striking and atmospheric.

Also, Dixon should be praised for not attempting to write Destro’s Scottish accent – it usually doesn’t work.

You know, from a purely operational standpoint, Snake Eyes and Storm Shadow must be a nightmare for G.I.Joe and Cobra leadership, respectively. They seem to just go off and do their own thing, pursuing their vendettas no matter the cost or impact on larger problems and plans. Cobra Commander’s plan seems to be taking on ever-more sinister characteristics as we learn a little more of what he has in store for Nanzhao.

As expected, this is a great issue. Highly recommended.