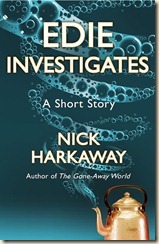 An introduction to the protagonist of Angelmaker

There has been a strange death in the quiet village of Shrewton: old Donny Caspian has lost his head. In the Copper Kettle tea rooms, Tom Rice, a junior nobody from the Treasury, puzzles over the details of the case. He has been sent by his superiors to oversee the investigation, but is he supposed to help or hinder? At the next table, octogenarian superspy Edie Banister nibbles a slice of cake and struggles not to become Miss Marple. But what is the connection between the two? Who killed Donny Caspian, and why? Taking in Rice’s present and Edie’s daring past, from duels on shipboard to death in back alleys, we are introduced to a character from Harkaway’s upcoming novel, Angelmaker.

I’m not entirely sure what to make of this short story. As an introduction to Angelmaker, I can’t imagine it’s very necessary. As an introduction to Harkaway’s writing style, it is a story that you will probably find the words “endearing” and “delightful” used to describe it, and its content full of “whimsy”. While they are accurate, I think it would also be necessary to add “frustrating” and even “irritating” to the description. I have extremely mixed feelings about this. Part of this may be because of my mood when I read it – I was having quite the bout of book-indecision – and yet, even with hindsight, I still find myself less-than-satisfied with this short story.

On the author’s website, Edie Investigates is described thus: “It’s a standalone. It’s a species of prologue. It’s a murder mystery.” All of these are, I suppose, true, but I really wouldn’t recommend it as a prologue. Read it after you read Angelmaker, if you enjoyed the novel.

The story is fine, if a little thin and doesn’t really go anywhere. Yes, we’re introduced to Tom Rice, “recently appointed Under-Nobody in charge of sod all” from the Treasury, who is shipped off to Shrewton to look into the death of a Very Important Banker. We are also introduced to Edie Banister, octogenarian former spy and current Nosey Old Lady. But, really, that’s it. It’s extremely short, with 30% of the eBook taken up by chapter one of Angelmaker.

Edie is extremely endearing in many ways. Here’s her thought-processs while sitting in the Copper Kettle:

“Edie poked the Linzertorte with one of those three-tined objects some people insist on calling a runcible spoon, and wondered hopefully if the filling might be poisoned. She inhaled carefully, and detected a scent of almonds: the infamous tell-tale of potassium cyanide – albeit also and more commonly the tell-tale of marzipan. Putting the mouthful to the test, she established that it was not poisoned, and grudgingly acknowledged that it was in fact pretty good. Morose and unwilling, she settled down to enjoy it as little as possible.”

Harkaway has made it clear that this was intended to be a bit of fun, something extra for fans of his work and who wanted something to whet their appetites for his upcoming, second novel. There are some very nice linguistic flourishes that recall the style of dialogue from classic movies (British and American, as they both had that slightly fake, strangely British quality).

The writing style, ultimately, dominates my impression of the short story. The prose are florid, erudite, twee, pretentious and self-indulgent. Sometimes this works, producing a sense of nostalgia in the reader, but at other times, I found it incredibly irritating and a little forced. I assume the intent was to write a Frightfully British story. Which is fine and good, but I can’t help thinking that there’s a reason that style died out (if, indeed, it can be said to have ever really formed a proper ‘movement’). The prose and linguistic choices are intentionally flowery, but can feel extremely overdone.

As an intro to the author’s next novel, I must admit it put me off. I can’t imagine an entire novel written in this style. It would be exhausting, and the not-infrequent flourishes of stylistic genius and wit would not be enough to get me through.

It seemed to settle down at the mid-way point, as the story kicks in properly, but then it also felt like it abruptly ended. There’s plenty of allusion to modern day political, intelligence and international scandals (Iraq, Wikileaks, etc.), and Harkaway sprinkles in a lot of commentary on aspects of the real world that are of interest to him – for example, the Soviet Union’s history of brutality:

“The science outposts he supposedly constructed were just labour camps, bizarre make-work for the losers in Stalin’s games: Abkhaz and Ingush forced from the Caucuses, unwise poets, and Party members rash enough to remember yesterday’s promises… The numbers of the dead might seem too immense, but Stalin’s time had been a horror. Russia was enormous, and she could die like almost no other country on Earth. Uncle Joe had spent her people freely, used them up to drag the nation into something like industrialism, if you didn’t look too closely. Millions had died, and tens of millions.”

“He had himself produced reports which endorsed in every particular a given policy, while at the same time so setting them out that no elected leader would ever consider the policy’s implementation. It was one of the key skills of the British civil service, because politicians had to be forced to think of things which would happen after they were voted out, and didn’t want to.”

That Edie is an octogenarian not inclined to shuffle off into retirement does make her a rather endearing protagonist, and certainly makes her stand out from every other popular heroine or hero in spy novels.

Despite Harkaway clearly being a gifted writer and with a distinct voice, this short story just didn’t click for me. As I’ve suggested, there are flashes and snippets of brilliance, and some great ideas and observation, but I really don’t think I could read an entire novel in this style – even the short story started to grate a little. Maybe I was in a mood or something, but despite the endearing qualities of the premise, character and prose… this just didn’t do it for me.

Knowing me, however, I will probably still end up giving Angelmaker a try. I can’t guarantee anything, though. 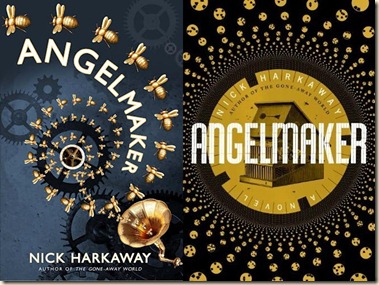 As an aside, I prefer the UK cover artwork to the US edition.