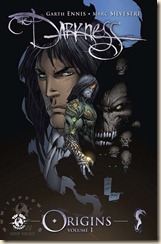 The beginning of the dark…

Mafia hitman Jackie Estacado was both blessed and cursed on his 21st birthday when he inherited the power of The Darkness, an elemental force that allows those who wield it access to an otherworldly dimension and control over the demons who dwell there. Forces for good in the world rise up to oppose Jackie and what his gift represents, but in this story, they are the bad guys.

Another title I tried thanks to Comixology’s free sampler of the first issue. I’d been aware of the series for a little while – it has connections to another of Top Cow’s titles, Witchblade (which you can also try for free) – but had never got around to trying it out. In summary, it’s a great title: twisted, dark (of course), and with plenty of moral ambiguity. It’s also visually impressive and sometimes arresting. I really enjoyed this. I am slowly developing a real taste for Top Cow’s titles.

A lot happens in the first issue: we get introductions to the various key players; we are teased with information about the eternal battle between the light and dark, as well as some of the players on either side; and, most importantly, we are introduced to the power of the Darkness.

To the backdrop of an intra-Mafia power struggle, complete with rats and assassinations (attempted and successful), we learn of Jackie’s brutal world. Over the course of this volume, we learn more of the mysterious forces at work behind the scene: first, two opposing sides – light and dark – attempt to get to Jackie before the Darkness takes him. In the second issue, a fellow called Sonatine locates the Darkness within the Witchblade-Angelus-Darkness universe:

“Greatest of all is the almighty Darkness, a glorious entity of chaos and wild abandon. Its wielders are blessed with the power of creation, and can form whatever shapes and entities they choose…”

Sonatine, despite being a rather straight-backed creep, provides some dark chuckles in issue three (he has a great, memory-altering hypnotic power – “I take my pleasures where I find them”, he tells an associate, after one particularly amusing memory re-write). There are a variety of factions hoping either to end Jackie or to exert a level of control over him and, by extension, the Darkness. Sometimes, this works out fine for Jackie (he has a number of new protectors), but there are some severe downsides to having the Darkness, which rather cramps our hero’s lifestyle. With his life increasingly subject to other people’s agendas, Jackie eventually decides to take things into his own hands, and exert control over his own destiny.

The cast of characters is varied and interesting, and even minor characters feel pretty well fleshed-out, distinct from each other. There are some tropes used for the Mafia characters, but one gets the sense this was intentional, a bit of a tongue-in-cheek nod to pulp-fiction wise guys. The humour sprinkled throughout the issues is nicely dark, a lot of it gallows’. And poor Wenders…

The artwork is in the distinctive, stylised Top Cow aesthetic, with some nice, gothic, Geiger-esque touches for the supernatural elements of the story (the Darkness itself, and the aspect Jackie takes on when he draws on it – see below). It remains, however, at times sketch-like, with rougher lines and details. It gives the book a slightly grittier feel. 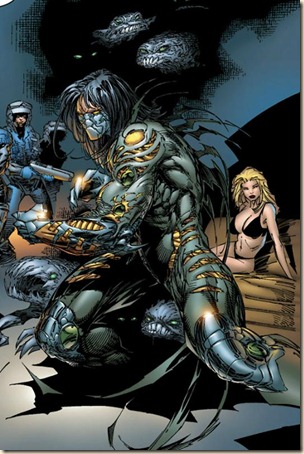 I have one quibble, and one issue with the series. My quibble is that Estacado seems to learn rather quickly how to use the various facets of his new powers. I think I understand why this decision was made – to avoid an over-long origin story, and make sure things could kick off properly in a timely manner. So, only a minor thing. My only complaint with the series is to do with the editing and proofing, as there were a few erroneous dialogue bubbles (where the words are clearly meant to come from a different character, but the bubble is attached to the person they’re speaking to), and also a few typos, which I don’t really understand in comics, given the relatively sparse text involved.

It’s a little like The Sopranos and Supernatural collided in the form of a comic. There’s a fair amount going on with the story, as Jackie is forced to take a look at his life and legacy, and come to terms with the role he will play and also the person he has become.

I really liked this series, and I aim to get caught up with it.

[Next up in my Top Cow Trials will be Hunter Killer, which was written by comics master Mark Waid.]

Posted by Civilian Reader at 5:04 PM