A few days ago, Henry Herz got in touch with me about Nimpentoad, an illustrated book he’d written with his two sons. I was intrigued by the sample of artwork he sent, as well as the story of him writing the book with his kids. So, I asked if he would like to write a guest post about the process. 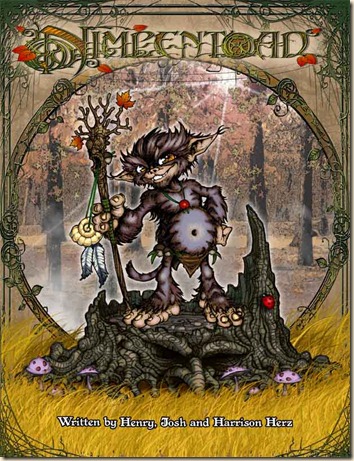 Nimpentoad is the fantasy story of a courageous and resourceful little Nibling who leads his tribe through the perilous Grunwald forest, overcoming obstacles and encountering strange creatures along the way. This post is about the creative journey of Nimpentoad by a man and his two young sons.

My love of the fantasy genre began in elementary school with Where the Wild Things Are, which I read more times than I could count. Later, I read The Lord of the Rings and The Hobbit. My parents had to pry me away from my favorite TV shows like Spiderman, Johnny Quest, Fantastic Four, Voyage to the Bottom of the Sea, Space Ghost, and The Herculoids. Note to self: damn, I’m old...

I read all the fantasy and science fiction I could get my hands on in high school. Some of my favorites were: Narnia, Chronicles of Earthsea, Changeling Earth, Lord Kalvan of Otherwhen, The Amber Chronicles, Elric, the Foundation trilogy, and the Dune trilogy.

There’s a certain fellowship that is created by a shared love of fantasy and science fiction. I suspect every reader of this post will have read more than one of the titles listed above. It gives us a common frame of reference, vocabulary, and pantheon of characters and authors to admire.

Five years ago, my sons were five and seven years old, and I wanted to share my love of fantasy with them. They were too young for watching most of the fantasy and sci-fi movie classics, and there are only so many good fantasy books available for that age range. Struck by inspiration one day, I came up with a way to share the joy of entering the magical realms of fantasy. I would write a fantasy book for them.

My initial draft was illustrated by grabbing pictures off the web. When you’re using a Middle Earth ecosystem, it is not hard to find images of goblins, orcs, trolls, and the like. What I did not anticipate was that my boys would give me feedback on the story. They devised some of the character (“Nimpentoad”) and creature (“Neebel”) names, and made plot line suggestions. And who better to help make the story appealing to kids than other kids? So, my goal of interesting my sons in fantasy transformed into also encouraging them to write. Very cool.

Originally, I only shared the story of Nimpentoad with family, for their own enjoyment. I had no thoughts of having the book published. But one day, my sister-in-law suggested that I consider publication because she felt the story was much better than a good deal of the books she was seeing for her similarly-aged kids. I thought about it for a while, and decided to give it a try.

The first step was to find an artist who a) had the skill and style suitable for our book, and b) was willing to work at a very reasonable (translation: negligible) price. This turned out to be the most time-consuming part of our journey. We eventually found someone, who then flaked out after completing one illustration. Lather, rinse, repeat. Apparently, there is something in the creative mind that abhors the structure of a schedule, as our second artist also flaked after one illustration.

We were completely discouraged and demoralized, and at that point I let the project lie fallow for a couple of years. I can’t actually say what motivated me to try to re-forge the shards of my story, but (like Bilbo in The Hobbit), maybe I thought the third time would be the charm. Well, it turns out that the two previous obstacles were there not just to test our perseverance, but also to lead us to the most suitable illustrator. Our third illustrator, Sean Eddingfield, has (I think you’ll agree) a terrific style, with incredible detail. The kind of detail that makes the reader want to climb into the picture and go exploring. 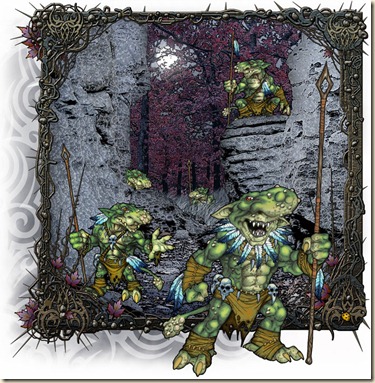 Once again, my sons were involved, this time in providing art direction. We would explain in words what each illustration should contain. Collaborating remotely via email and DropBox, our artist would give us a rough sketch, and we would provide feedback on details and color palette. Nimpentoad came to life, while my boys added another dimension to their experience.

Given the amount of time that had passed, as well as the anticipated challenges with finding an agent or publisher willing to take a chance on an unproven entity, we decided to self publish. CreateSpace has a fabulous web-based print-on-demand service, backed up by superb customer service support. We were in business!

Well, sort of. We had a good book, but we lacked readers. So, we then embarked upon the most arduous part of our journey – promoting Nimpentoad. Luckily, my boys (dare I say it) are charismatic and precocious, and are comfortable conducting public readings and doing book signings.

At the risk of infringing on child labor laws, I have booked my sons as much as their school schedules would allow. We’ve done readings and signings at San Diego libraries, elementary schools, La Jolla YMCA, the New Children’s Museum, Mysterious Galaxy Books, Readers Books, Warwick’s Books, and Barnes & Noble. We have books for sale in Mysterious Galaxy, Readers, Vroman’s, and Barnes & Noble, as well as online.

All these appearances have further enriched the journey for my sons. They understand some of the aspects of running a business and publishing. And they are now comfortable doing public speaking and meeting new people. One particularly fun event was at the San Diego Public Library 46th Annual Local Author’s Exhibit. In attendance were fellow authors Chris Ryall (of IDW Publishing) and famed graphic novelist Eric Shanower. Both of these gentlemen, after my sons asked for their autographs, graciously asked for my boys’ autographs. First class! 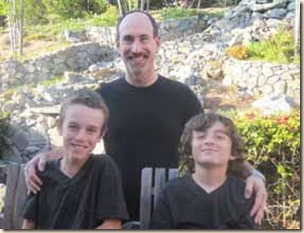