While I was away, Dark Horse comics started a new Star Wars series – Agent of the Empire – which received a lot of good reviews. Being the semi-rabid fan of Star Wars–related books that I am, I decided I had to check it out, along with the other new series that started this week, Dawn of the Jedi. And both of these new series are pretty great. So good, in fact, that I am strongly considering trying out some others (especially the other new series, War). 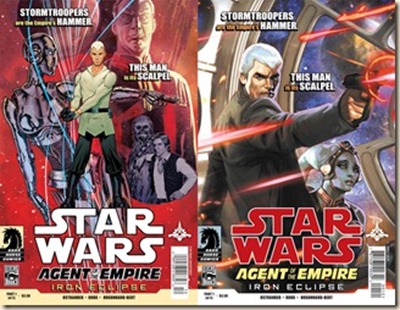 The name’s Cross. Jahan Cross. Move over, James Bond; there’s a new secret agent in the galaxy, and he has the weight of the Empire behind him!

Cross’s mission takes him and his assistant IN-GA 44 to the affluent Corporate Sector. There, on the trail of stolen droid technology, they will rub elbows with diplomats and desperadoes, captains of industry and sergeants of the local police – and rub most of them the wrong way!

Working undercover as a diplomatic attaché, Jahan investigates widespread theft of droid technology in the Corporate Sector, and a mysterious project known as “Iron Eclipse.” During an elegant embassy soirée in the Corporate Sector, Cross learns of the possible involvement of the powerful Stark family. They are a band of egomaniacs and bored elites, and it doesn’t take long for our hero to finagle his way into the good (and bad) graces of some family members. Before long, however, Cross will be wanted for a murder he didn’t commit, and is forced to go on the run from Corporate Sector authorities. There’s action and intrigue aplenty in this title, all set to a great Star Wars backdrop. Cross is a rather unorthodox Imperial agent – his methods would be more expected from a Rebel agent: he’s not always the most subtle, and he has a tendency to accidentally kill people he needs to question – but only if they try to kill him first. Which is rather often. He also has a rather cavalier disregard for collateral property damage, which any Rebel saboteur could be proud of. He is not entirely without allies, either, as he stumbles across two smugglers with a very fast ship, one of whom he attended the Imperial academy with...

This is a great new series. It has a different feel to other Star Wars comics I’ve tried, focusing more on the politics of the early Empire than on any struggles related to or including Jedi (in fact, there are no Jedi involved whatsoever). It has the feel of a science fiction espionage/crime thriller, with some nods towards James Bond (complete with ‘Q’- and ‘M’-like characters) and it’s written, drawn and coloured very well indeed. The dialogue is realistic, and the pacing is very good.

This series is very highly recommended to any fan of Star Wars and science fiction comics in general. It’s really good fun, and I hope it lasts longer than the five issues that make up the Iron Eclipse arc. 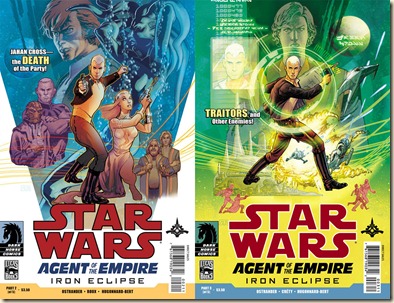 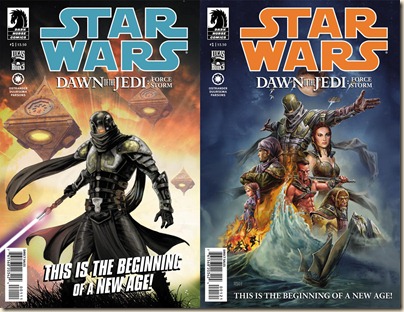 On the planet Tython, in the center of the galaxy, an order of warrior monks strives to maintain peace and to balance the mysterious power known as the Force. But a stranger is coming--one who will destroy both peace and balance, and open the galaxy to exploration and conquest. This is where it all begins!

A tantalising first issue, though one that poses an awful lot of questions. It’s a a long issue, most of which focuses on a very contracted history of how Force sensitives were transported from wide-spread planets and system to Tython, a world located near the galactic core. We aren’t given a lot of information, but we learn a little bit about early Je’dai society and how some of the Force users spread across the galaxy. There’s mention of a great war, but we are still left with a few question. We are not sure, for example, why or by whom the Force sensitives were transported in the first place.

Most of the questions for me, however, were regarding the “bad guys” of the piece. The bug-eyed Rakata Empire employs (perhaps even owns) Force “hounds”, who are used to hunt down other Force-sensitives among the populations of the planets they conquer and subjugate. At the same time, though, the Rakata exhibit Force abilities of their own – for example, empathic skills, telekinesis and Force lightning. So, it’s unclear what is actually going on with them, and how the hounds are significant.

So, there are a lot of questions remaining at the end of this issue. This is no bad thing, however, as I do like a little mystery in my reading. I’ll certainly try the next issue, but I didn’t think Dawn of the Jedi was as strong as Agent of the Empire.

The issue is rendered in very good, clean and clear artwork, and the writing is very strong.

Both of these series are printed on great-quality paper, and feel like good, long issues. There’s a lot that happens in the stories (especially Agent of the Empire), and it feels like we’re getting a lot of comic for our money (although, they are $0.50 more than many other comics) – combined with the higher print quality, we get an overall feeling that Dark Horse Star Wars titles are top-quality products. I’m going to have to explore more of the publisher’s back-catalogue, as well as some of its new titles. Anyone got any recommendations?