I’ve only recently started reading Zenescope titles and so far have been impressed with everything they have to offer. This is a big week, so I wanted to look at as many of the new releases as possible. This meant catching up with some of the shorter series (such hardship…!). 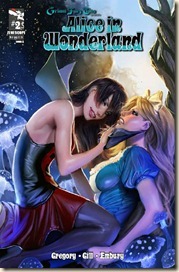 The adventures of Alice in Wonderland continue. Having escaped from the clutches of the Jabberwocky, Alice sets off on a journey through the realm of madness and terror. Along the way she befriends another strange captive of this world and will quickly learn that not everyone is what they seem.

As Alice ventures further into Wonderland, she discovers even more weird, wonderful and terrifying inhabitants. At the same time, the Jabberwocky commands her return, but the Cheshire Cat and, especially, the White Rabbit have their own agendas, and are not above playing dangerous games with the various powers of the land.

I must say, I’m really enjoying this series – it’s a great re-imagining of the Alice in Wonderland world, much darker and more twisted. The writing is great and shows real imagination, and the artwork is also superb – lots of interesting, alternative and innovative framing choices, and a very clean and striking art style. 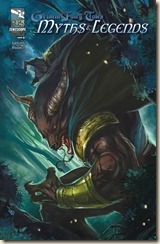 A brand new story arc begins here! When Edmund finally moved away from his abusive home, he thought he had escaped the cycle of violence that was his life. But when his younger brother Drew, commits suicide, Edmund must come back to the one place where he thought he would never return. Meanwhile forces not of this world are slowly shaping Edmund’s destiny in terrifying ways... Forces that may very well bring out the Beast within him.

It’s Beauty & the Beast meets American Psycho, as we are introduced to Edmund – a stock-trading prodigy, always struggling to control the anger and violence that bubbles just under the surface. He’s arrogant and selfish, as well as cold and, probably, extremely unhappy. When he goes home to care for his father, who has been the source of all misery in his life, he confronts the truth, and a little of the beast starts to slip out. We don’t know fully what happened with Drew, yet, but I assume we’ll learn much more in the next issue. The story draws on a few of the psychoses suffered by Bateman in the novel, as well as some of the same narrative devices, such as daydreams of violence and brutal fantasies.

It’s an interesting and well-written take on this fable, and I’m eager to find out how it develops over the next three issues. The artwork is very good, of the fast-becoming-distinctive Zenescope style (I’m still relatively new to Zenescope titles, don’t forget). It’s a very clear and clean style, with some stylisation and comic-book-exaggeration of, for example, female figures. I also really liked the way Edmund’s shadow changes shape depending on how close the beast is to the surface.

This was very good – I much prefer this type of new spin on fairy tales than those we saw in the first Grimm Fairy Tales collected volume. Transposing them onto the present real world is, in my opinion, far more interesting. Recommended. I’ll try to get the rest of the Myths & Legends issues to catch up properly.

When fourteen year old Sela Mathers discovers an ancient magic book in a condemned library her and her younger brother cast a spell that unlocks the amazing worlds and characters from the books and novels around them. Hercules, Robin Hood and Pecos Bill all come magically to life. But heroes aren't the only characters in stories. Villains too are affected by the magic spell and soon the children find themselves in a race against time to reverse the spell as evil characters from all of literature threaten to take over the world. Their only chance lies with the heroes they've brought to life. But even that may not be enough to stop the Frankenstein, Baba Yaga and the Wicked Witch of the West!

The first issue introduces us to a young Sela and her brother, Thomas. Their father, a ruthless billionaire real estate tycoon has brought them along to a grand library. He intends to tear it down and develop the site, but the current librarian is having trouble with relocating the stock. Sela and her brother open the mysterious book (which looks suspiciously like the copy of Grimm’s Fairy Tales that crops up in the flagship Zenescope title), and they are sucked into separate books.

Transported to the imaginary worlds that they have opened in the Library, Sela and her brother struggle to escape back to the real world, but the dangers of ancient Greece and earth’s Jurassic period have magically come to life. The characters do not remain stuck in the books, and we are temporarily transported back to the Library – only, Sela and Thomas do not come back alone: villains and heroes come back with them, into the real world. Unlocking the magic spell book has brought Sela’s worst nightmare to life: the Wicked Witch. The only way to put her back in her book is to reverse the spell, the spell book that started this mess, and the key to its lock have been sucked into the portals into other books.

In order to get them back, Sela and Thomas will have to venture back into literary worlds full of monsters, but with the aid of some mythological and literary heroes, they have a fighting chance. Things do not go quite according to Sela’s plan, and at the end of the fourth our heroes are in dire straits.

I really enjoyed this – it’s fast-paced and full of action, as well as being highly inventive. I really liked the idea of bringing the characters to life, as well as diving into the books. With only one more issue in the series, I’m rather sad this isn’t going to be a lot longer. Highly imaginative and fun, this is very much recommended. 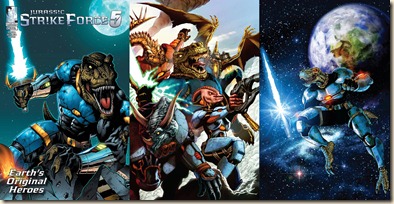 For over 165 million years dinosaurs ruled the earth…until the alien overlord Zalex discovered the planet 100 million years ago. In search of an army to conquer the universe Zalex finds the perfect candidates to mutate into his ultimate soldiers in earth’s Jurassic reptiles. With his new army nothing can stop Zalex from ruling the galaxy and the universe beyond it… nothing but a team of mutated dinosaur heroes.

This is one of Zenescopes more esoteric series… And a pretty fun one, to boot! Issue #0 only offers a very, very quick introduction to the story, as we see the beginnings of how Rex, the leader of JSF5, became the more anthropomorphised dino-warrior. After that, the issue includes a good number of character design and description pages, covering all of the main players on both sides of the fight.

At the start of the first issue proper, the JSF5 and also their nemeses are in stasis, having been trapped below the Antarctic ice for 160 million years. With Zalex and his minions freed, JSF5 also awaken, disturbing a group of archaeologists – although, not disturbing them enough, as they seemed to take to the idea of walking, talking, armour-wearing dinosaurs rather easily…

This was quite fun. It probably won’t be for everyone, but if you’re after some slightly-silly action, then it should offer a good diversion. I’m not entirely sure how the series can be maintained for very long, but it looks like at least the next issue will take a look at the characters’ origins, explaining how they were changed into the intelligent warriors and villains from these issues. This could be a lot of fun. 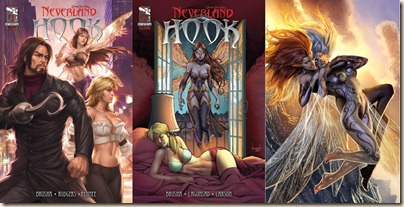 For a time, the nightmares had ceased for Nathan Cross, until now... People are beginning to disappear again and Cross knows deep down that evil is again alive in the realm of Neverland... and he knows he might be the one man who can stop it

I’ve not read the Neverland series that preceded this, but I was told it wasn’t entirely necessary to do so. We join our characters a while after the events of the original series, and they are still coming to terms with what they saw and experienced. Nathan in particular, who still mourns the loss of his brother, is having dreams that convince him that Timmy may still be alive. Then, a string of murders in New York City, and an attack on the subway suggest that Neverland is not yet done with Cross and his friends. To get to the bottom of the murders in our world, Cross goes back to Neverland, to find it utterly changed – death is everywhere, and there’s a new power on the ascent. One that wants something from Cross.

I particularly liked that the roles of Pan and Hook have been reversed, with Hook our hero and Pan the evil villain. And speaking of Hook, his actual hook is pretty cool – it’s an impressive piece of sci-fi equipment that can morph into a hand or even some kind of cannon. This was a bit of a surprise, when it happened, but also pretty cool.

I enjoyed these three issues. It’s still a little unclear where it’s going in the long-run, but I do like this re-interpretation of the Peter Pan story. I’ll have to catch up and read Neverland sometimes soon. The artwork is pretty varied, with so many artists working on the title, but they are all talented – the series alternates from crisp and clear, to more gritty and dark artwork. Despite the differences in styles, the artists have managed to maintain a uniform aesthetic, and it works very well. Certainly a series to watch.