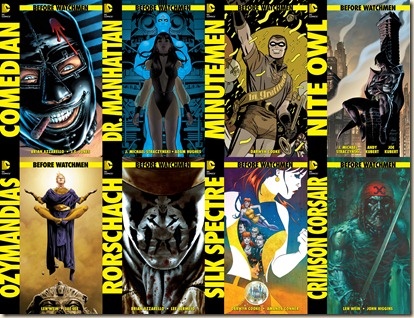 … and I really don’t understand why so many people are getting into such a tizzy over it. Most of my initial impression was drawn from the blizzard of tweets that have been cropping up throughout the day, so bear with me. They have been described as in DC’s own announcement “As highly anticipated as they are controversial.”

“It’s our responsibility as publishers to find new ways to keep all of our characters relevant,” said DC Entertainment Co-Publishers Dan DiDio and Jim Lee. “After twenty five years, the Watchmen are classic characters whose time has come for new stories to be told. We sought out the best writers and artists in the industry to build on the complex mythology of the original.”

Right off the bat, I should state that I’ve seen the movie (which I thought was brilliant), but have not read the graphic novel – only because I just never got around to buying it. Therefore, I do not have the connection or emotional attachment to the original material that I know some people do. I was also unaware of the long history of friction between Alan Moore and DC Publishing.

Nevertheless, I really don’t see why a lot of people are getting themselves so worked up about this. An NPR article claims that “Comic-book nerds are outraged today” resulting in much “teeth-gnashing” and the internet “hit[ing] Defcon.2”, but all I’ve noticed is some mild grumbling referring to much anger on the part of comic fans. The author of the NPR piece, Marc Hirsh, nevertheless then goes on to call DC “stupid” for making the decision to commission and release these comics, and proceeds to write an article filled with derision and far more adverbs than necessary. In fact, it’s the only piece I’ve read that includes the outrage many others have mentioned.

However. If there has been outrage, I don’t really understand it. If you don’t think there should be prequels or anything else Watchmen-related, then… don’t read them.

Or am I missing something fundamental here?

The covers look quite nice, I must say – particularly those for Rorschach, Nite Owl and Ozymandias – and I wouldn’t mind checking these out. The series will be released “this summer”, and the line-up is as follows:

Each week, a new issue will be released, and will feature a two-page back-up story called CURSE OF THE CRIMSON CORSAIR, written by original series editor Len Wein and with art by original series colorist John Higgins. There will also be a single issue, BEFORE WATCHMEN: EPILOGUE, which will feature work by various writers and artists, and another CRIMSON CORSAIR story by Wein and Higgins. If I’m perfectly honest, I don’t understand the point of a two-page back-up story – why not just release it as an individual title?

Dave Gibbons, WATCHMEN co-creator and original series artist had this to say about the new series:

“The original series of WATCHMEN is the complete story that Alan Moore and I wanted to tell. However, I appreciate DC’s reasons for this initiative and the wish of the artists and writers involved to pay tribute to our work. May these new additions have the success they desire.” 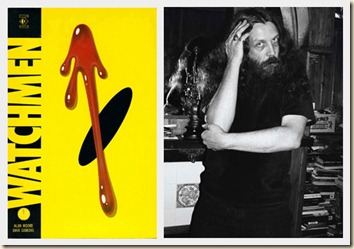 Moore, however, has not been as supportive, and described the decision as “completely shameless” to David Itzkoff of the New York Times. Moore added that the move indicates an “eager confirmation that [DC] are still apparently dependent on ideas that I had 25 years ago.” Itzkoff includes a number of choice quotes from Moore, including an insistence that this is not about money, but rather creative and contractual differences based on those he signed when Watchmen was first being sold. The article also includes reactions from a couple of other people involved in or familiar with the project. The issue of royalty-entitlements is rather muddled, as far as I can make out – some sources say he is entitled to royalties on any and all Watchmen-related media, but he has also refused them in the past for all five of the movies based on his creations (Watchmen, V For Vendetta, From Hell, Constantine and League of Extraordinary Gentlemen – all of which I enjoyed to varying degrees). The fact that Moore has publicly washed his hands of Watchmen only goes to make the whole issue more confusing.

As someone who has never read the original graphic novel, I think I will try these out as well. I also think it’s possible that this new line of comics will get more people to try out the original book, so I don’t really see a down-side. If it gets more people interested in the franchise, then why not? Did the movie not do the same?

[Incidentally, the BBC news piece about this was very disappointing – they included basically the whole text of the DC announcement shuffled into a different order, and took some quotes from the New York Times piece. And that’s it. They are a massive media company with plenty of resources and universal name-recognition, they should have been able to at least pick up the phone and get one or two of their own quotes.]

Posted by Civilian Reader at 12:26 AM